Crimes Of The Future: Part 1

Some of the best comes in twos. Underworld, Autechre, Inner City and Daft Punk just to touch upon the tip of the iceberg, and now a duo who hail from opposite sides of the country have begun a label for their darker, left-of-the-centre sounds. Both share the same East London studio, “The Bunker”, with the hybrid of DJ, producer and deity, who also answers to Andrew Weatherall, and fellow A Love From Outer Space vinyl-spinner Sean Johnston.

Glaswegian Scott Fraser arose from a several year hiatus following a move to the big smoke and onto the Shoreditch Bunker of Mr. Weatherall, and through picking up more subversive and challenging records, became inspired to fiddle on some keyboards. These pent up brainwaves led to an explosion of creativity, which gave us 2011’s remix of ‘Lites Go Out’ with Capracara, a track originally by Virgo Four, who Scott had been a fan of since the late ’80’s. He’s also been busy on a whole host of labels including World Unknown, Awkward Movements, Astrolab Recordings and Andrew Weatherall’s vinyl-only imprint Bird Scarer.

Timothy J. Fairplay, whose tender junior years moulded him into a grunge kid who didn’t get into dance music until the age of 17, has Portsmouth and Brighton’s vintage techno nights to thank for getting into the first Daft Punk and Underworld albums, and consequently dance music. He went onto become the guitarist of Scarper and later on Battant, whose influences included Dopplereffekt and Depeche Mode. When Battant desperately needed a rehearsal room, Weatherall parted ways with one of his in The Bunker for the cost of a bag of chips (relatively) and gradually Tim turned it into his own little studio. Once Battant had ceased to exist, he stayed there solo and found a gap in time where Weatherall’s engineer had left. He asked Tim to do a Grinderman remix and after various projects, including the Asphodells which is his and Weatherall’s joint project of slow-burning disco, post-punk, techno and classic house, he calls this year almost his ninth in The Bunker as resident engineer.

So what brings these two together, apart from a shared penchant for 80s films? A label named after a David Cronenberg film. We caught up with Scott and Tim to talk more about their label, its newest release and obscure film references.

For the readers who aren’t familiar with the Crimes of the Future label, can you give us a low down of how it came about, the ethos behind it and what sort of releases they can expect?

Scott: It started out as a club, really. We both work out of the same studio and I’ve got a friend in Glasgow who asked us if we wanted to go do something up there two years ago. We went up and started doing that, and we did it outside Glasgow a couple of times and then we both had the idea that we should do a label and then it just came out of that, really.

Tim: It’s named after an old, really early Cronenberg film, it’s what both the label and the night was named after. David Cronenberg films are pretty weird, usually, so it seemed like quite a good name for the night. Even though we’re aiming it at the dance floor, we want it to be the weirder end of electronic music.

Your David Cronenberg fandom is evident in your video with FACT Mag earlier this year; a poster for ‘The Brood’ is clearly visible when you’re performing the live jam. Out of all his films, why did Crimes of the Future make the cut?

Tim: Crimes of the Future is quite cool in that it was the first film he ever made. It’s only an hour long, he made it when he was in university and in some ways it’s not very good; not very played out because it was just shot with no money. It’s pretty much only got one character in it but it’s got loads of fantastic David Cronenberg ideas that he reuses later in his career. So that’s what’s quite nice about it, it’s not too well known. It’s not as if we named the label Videodrome, as then everyone would instantly know it because Debbie Harry was in it. ‘Crimes of the Future’ is also such a good name. We wanted it to be like, okay it references a film that was on in the 70’s but I wanted it to be future looking. Having ‘future’ in the name of the label seemed to fit very well with what we do.

Scott: Yeah, because we do play a lot of new music. Although we will play old music, the greatest percentage is new stuff, if not from us then from other people.

Though you’ve mentioned before Crimes of the Future isn’t just a soundtrack label, are there any directors whose works you feel encompass the style and vibe of the label?

Tim: Paul Verhoeven [who directed Robocop]. It’s those sort of nasty, future dystopian films. I’m a big fan of JG Ballard. So, yeah, it’s not a soundtrack label at all, but you know that scene in The Terminator, in that nightclub? It’s wanting to make records that you could imagine being played there.

Since the label’s inception in 2013, Crimes of the Future’s releases have been churning out in steadily. The pair are both in agreement to let the label run its natural course, with primarily artists approaching them. Their first release came from an Antoine Rouge, ‘Spook Juke’, who happens to share the same name as a Crimes of the Future character (whose identity has strongly been rumoured to in fact be Tim himself) followed by Detroit-based Elizabeth Merrick-Jefferson’s ‘Quetzalcoatl’, whose release was a Detroit-house flavoured affair. The third release from Black Merlin, ‘Amazing Exotics’, was a high powered techno track whose hard-hitting metallic sounds somewhat resonates Cybotron’s ‘Clear’, released on the Fantasy label back in 1984, and following this, Antoni Maiovvi’s ‘Spunnowt’, was a favourite of New York label, The Bunker.

Your most recent release, ‘White of the Eye’, is from Scott himself, but what’s on next?

Tim: A guy called Perseus Traxx, who came to us, and then the one after that is me and Matilda [who he worked with on for an EP on Astro Lab Recordings], but going under the name Haunted Doorbell. I like surprising people so if afterwards we put one out that’s a bit Italo-sounding, and then one that’s really techno, it’s because we try to not get pigeonholed.

Scott: When we were in America earlier this year, we did two tracks with Willie Burns so we just need to decide when that will come out. We’re going to try and do some oddball ones in-between, like that ‘Sugar Puss’ release, but mine’s next. We’re going to do 50 hand stamped ones before Christmas and then it’s going to be on white vinyl afterwards. Silent Servant did a remix and then it’s Perseuss Traxx, which will probably come out in February.

Tim: With Perseus Traxx, he puts out a lot of bumpy, Chicago house but the stuff we’re putting out by him is a little bit different to what he’s known for. One of them is quite cinematic sounding.

Scott, your newest release under the moniker ‘Nothing But Blood’ is a three track EP, whose first track ‘White of the Eye’ references Donald Cammell’s ’87 thriller. Was the track inspired by the film, or once completed were there elements of the track that reminded you of the film?

Scott: Through the 90’s I did quite a lot of techno and then stopped doing music for a long time. When I stepped back into it, I guess that was the line I was going down and this is probably the first one I’ve done that heads more in that direction. The whole EP is a techno record, the rougher end of Chicago. I don’t know how it came about, I just remember watching that film and I was quite taken with it. It’s quite an odd, terrifying film. I just like the name, ‘White of the Eye’.

Tim: One day we’re going to do a load of releases inspired by Rom-Coms, but not yet…

How did the ‘Nothing But Blood’ moniker come about, and can we expect more of the harder end of techno stuff under name, as opposed to ‘Scott Fraser’?

Scott: I was knocking about on eBay for house records one night, searching for “Chicago house”, just pissing about, and then this book came up, published by Chicago House. It was a weird pulp detective novel called ‘Nothing But Blood’ so I thought I’d buy it because it was only a quid. But yeah, I’ll be releasing stuff like that a lot more next year.

Would you recommend the book?

Scott: Depends on if you like the stuff! It’s just one of those pulpy, American, sexy detective novels. It’s got a particularly strange cover, look it up and see! And I just thought it had a nice ring to it.

Tim: I think sometimes the way we use these film related things is quite dumb, really. Quite often, when I need a name for something, I go thumb through the chapters of some old ’50’s horror comic and think, “Oh that’s a good name, I’ll use that!”

If you had the opportunity to curate your dream Crimes of the Future night, who’d be on the bill?

We could obviously say someone like Danny Wolfers [Legowelt] because he’s someone we’re both really into and have been for years. I’ve got loads of his really early records and to be honest he’s quite an influence on me, and also the scene he came out of, based around The Bunker. I just used to love the records they put out on Bunker. They would be all various artists with five tracks on each side and it’d be cut really badly but they were always a) really good value for money and b) I just felt like there wasn’t much subversive music coming out anymore out of the techno scene, but the Bunker took care of that.

It might sound kind of arrogant but I love techno, but at the same time I don’t like a lot of techno I hear. I find a lot of it far too clinically produced and clean sounding and it just follows a formula. The records I’m really into are the ones that kind of have something in it that surprises me, or falls outside of that formulaic nature. Lots of techno for me, I find, is techno just for techno’s sake.

Scott: Dopplereffekt and Ultradyne, they would be good. Stuff that’s more left of the centre. I did Fabric a few weeks ago and Barnt was good, he did pretty much all his own music. To be honest, we don’t generally have guests. Melvin [Traxx] is the only DJ we’ve had. We’ve had Plaid live and Ed [DMX] but generally how it works is we just have one record each, but I think Silent Servant and Willie Burns are hopefully going to come and do one for us.

Crimes of the Future met Silent Servant in LA, where they were all playing Nuit Noire, a sporadic private party that Mount Analog host.

Silent Servant’s relationship with Crimes of the Future has evidently evolved, given that he has remixed ‘White of the Eye’ on Scott’s newest record. Check out a mix of the EP below.

Tags:
Previous Article
420 – D.Ramirez
Next Article
Yotam Avni: “It don’t mean a thing if it ain’t got that swing!”

Crimes Of The Future: Part 2 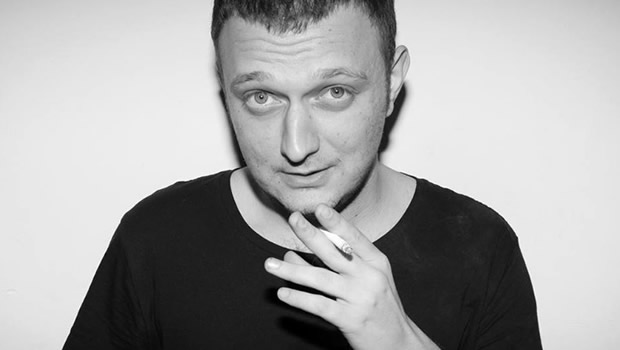