Crimes Of The Future: Part 2

As well as being a prolific producer in his own right, Scott has fathered several standout remixes, including Richard Sen’s ‘Night Navigator’, whose piano riffs carry a similarly infectious appeal as Roman Flugel’s ‘Sliced Africa, and his rework of Featureless Ghost’s ‘Sugarcoated’ (whose ex-member’s vocals, Claire Elise Tippins, features on Nothing But Blood’s ‘White on the Eye’; a menacingly dark techno track with insistent snares and eerie vocals). Tim isn’t a stranger himself after being schooled by Andrew Weatherall himself, and has gone onto make his mark on Khidja (who performed at the Andrew Weatherall Festival) and his fellow label-head Scott’s records. In this second part we take a look into the label’s future visits, their approach to remixes and their thoughts on modern day music journalism.

You’ve taken Crimes of the Future to Tel Aviv and Belgrade, and though you didn’t play collectively as Crimes of the Future, you both did a set at the Andrew Weatherall festival in Carcassonne this year. To take the slogan of the label, is there anywhere else in the world you think needs to be touched by ‘the sound of the lonely city’?

Scott: I’m playing Melbourne on New Year’s Day but yeah, it would be good to take Crimes of the Future to Australia.

Scott, you’ve mentioned before that your formula for doing a remix is you listen to the original parts, take what you like, re-program the drums and bassline, and you write a new hook. Tim, is there a set formula you use when you do a remix? I feel that your remix of Scott’s ‘Life of Silence’ needs to get an honorary mention.

Tim: The first remixes I ever did were ones when I was engineering for Andrew. I’d never done one before then, so I suppose I was schooled by Andrew in a way and his ethos was always to not worry about the original. I mean don’t necessarily destroy it, but don’t be in awe of the original. With Scott’s, I was quite happy to just find some part of it I could use and then just turn it into whatever I wanted. With remixes I tend to change the key of the track which will always make something sound really different. Because a lot of remixes don’t do that, they’ll still be in the same key so you can just play the two versions over each other. I’ve always tried to avoid doing that. I don’t have a huge ethos, I just treat it how I make a tune; I do whatever I want!

Scott: It’s an interesting thing because one thing I hadn’t really done a lot of was remix bands, but when Ellis Island asked me to do a remix I was a bit worried because it sounded so different to the original, because the original’s this jaunty pop thing and Andrew just said “Don’t worry about it, they’ve asked you to do it so they want it to sound like you”, and they liked it!

Tim: I enjoy doing remixes more when the original’s a live band because the sounds you get tend to be more exciting. With dance music you’ll often find the sounds don’t sound that exciting on their own, only when it’s all together as the finished track, but with an actual recording of a band that’s been done in a studio you can just get a snare track that’s got some amazing natural reverb or something. I think Optimo for years did no dance remixes, they’d only remix bands and I’m not going to be that militant about it but it is much more fun. Even if you turn it into something that doesn’t sound remotely live it’s a lot more exciting to open up and work with.

Scott: I tend to find when you do a band you get the live element, which kind of retains in some way. Because it’s real instruments it’s definitely a bit more interesting; there’re weirder sounds, and to actually take something that’s not a dance record and make it something you can dance to is good fun.

You both work in Andrew’s studio, which must be a hub of inspiration with you all bouncing ideas off of each other. What are the dynamics like?

Tim: It’s a very relaxed atmosphere down here. We have periods where we work together on things and sometimes I’ll be working with Andrew on something, but at times it will appear like a group of guys sitting around drinking tea and eating biscuits.

Scott: I don’t really drink tea in Scotland, more like lager, so yeah I’ve had to learn.

Tim: There are people who occasionally come down and work with us and then it’ll kind of feel like a “proper studio” but it’s kind of more like a big garden shed but at the same time, actually, an enormous amount of music comes out of here between us all so it’s not like we’re not working.

Scott: There’s a lot of cohesion.

Tim: It isn’t just some way for us to hide from our wives!

Scott, I read that back in your BIOS days, before you had a sequencer, you’d have to play every piece of kit live on stage. Granted the gear you use will have kicked up a notch, but do you have any intention of doing that in the near future?

Scott: To be honest, the stuff I’m using now is pretty much the same! The same drum machines and synthesisers. I think computers are only the real difference.

Tim: We do still work in that way, it’s just these days we record it onto a computer rather than onto DAT tape, and we’ll sync it to a computer, but we both still use a lot of analogue sequencers.

Tim: I’ve been working in this studio for nearly nine years and I’d already collected quite a lot of old gear and when Scott came down here, he initially had a couple of bits and Logic, and was trying to do it more in the computer, but quickly saw that I was making music similar to how he used to and realised, “I may as well go back and do it how I did before!”

Scott: There were three of us back then, so to do it on your own is pretty difficult. For one of our first live shows, the drum machine was dodgy at the back so we had to hold the glitch together with a clothes peg! I still get nervous about the computer, what happens if it stops!?

Scott, you mentioned in a separate interview that your BIOS night, after having invited Surgeon, Joey Beltram and Andrew Weatherall, got into NME’s top ten best new British clubs in 1997. What are your thoughts on modern day music journalism?

Scott: I think it’s probably all much for much. The format is different, a lot of it’s on the internet but you still get a lot of physical magazines. I think as long as there’s music, people will have an opinion on it and want to write about it.

Tim: I think with music journalism these days, which I suppose I don’t really care about, in physical magazines, you’re less likely to find stuff you’ll want to read about. Most of the stuff I’m into is only really written about in online magazines and blogs. When I was in my early 20’s, I used to buy Jockey Slut and Seven. Those days are gone, and DJ Mag is just hilarious. Maybe I shouldn’t be dissing them, but I suppose it’s changed in that way, but I do think you can find out about stuff a lot more than you used to be able to. These days you’re less likely to be in a situation where you buy a record and you’re like, “Who’s this by? What city has it come from?”, because now you can just type it online and find out more about it and I suppose techno is a bit more faceless because of that, but it is a lot more accessible.

Scott: Little labels and stores can get a lot more exposure now, but it makes the filtering job a lot more difficult because there’s so much of it. I had a fantastic record shop in Glasgow called Rubadu –(it’s a bit like Fat Cat in London – and a guy called Martin McKay, who’s still there, and I’d go in and he’d say, “You need to have a listen to all of these, they’re brilliant”. He was like a first stage filter.

Tim: On Beatport you just have everything, you don’t have that one person that goes, “Listen to this”.

Scott: Now that I’m 46 I’ve developed my own filter whereas in my 20s I’d be sifting through so much of what I thought I should be into.

Tim, I read that D’Marc Cantu’s ‘Size & Shape’ was one of your favourite techno tracks of 2013, but has there been anything that’s particularly caught your eye over the past 12 months?

Tim: Oh that record! It’s one of those moments where you put the needle down, and I like it so much that it makes me cross because I’m like “Somebody else wrote this!” Definitely my favourite techno record of that year, it’s just so musical! I play it a lot.

Scott: Funkineven’s ‘St Julien’. We’ve both played that a lot.

Tim: I was really taken with the Legowelt album that came out last year. I’m a big fan but I don’t always think his long players are as good as his EPs, but I thought with this one he’d finally done an album where you could happily listen to it from beginning to end.

Crimes of the Future’s latest release, ‘White of the Eye’ by Nothing But Blood is out now, available on Juno. Check out a mix of the EP below.

Crimes Of The Future: Part 1 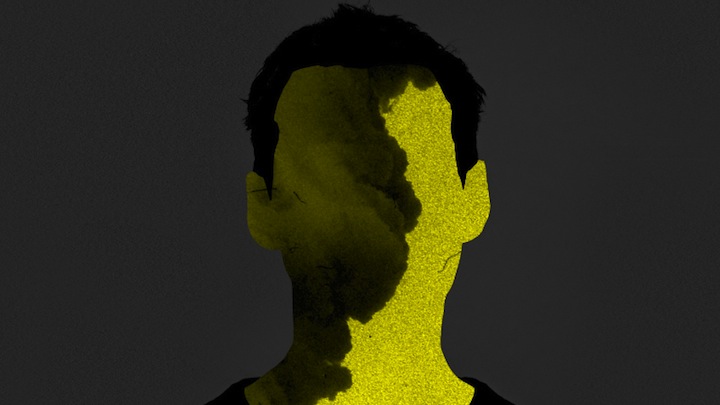