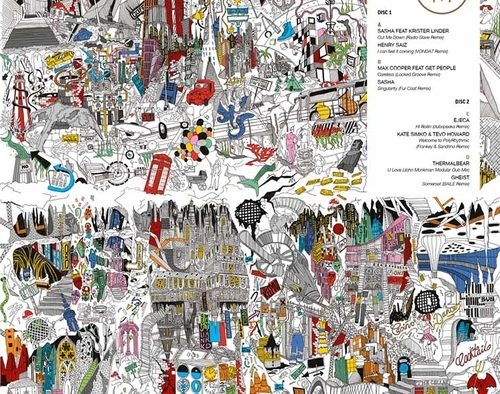 In the world of Sasha eight years is a long time. During this time Sasha has evolved into a live artist, further established himself as a respected producer, and consolidated his position as one of the World’s best International DJ’s. It is also how long Last Night On Earth has been in existence. LNOE is more than a label, it is a vehicle to carry some of Sasha’s considerable talent. Live shows & parties, hand-picked releases and that eponymous podcast that is savoured by an army of fans.

It is quite an achievement that LNOE has reached one hundred releases. Releases that have spanned a wide variety of new and established artists and has spawned some monstrous offerings, but most importantly represents the quality, opinion and musical integrity of the man ‘like’ himself.

‘LNOE 100′ is the first compilation to be released on the label, and it’s a compilation with a twist. The remixers have been hand-picked by Sasha, but they were given the choice of tracks to remix. It is then, hardly surprising, that four Sasha tracks receive the remix treatment, but there are some gems in there, and some wonderful updates of some glorious moments in time.

‘LNOE 100′ is indeed an intriguing body of work. It must be difficult to capture a stylistic sound that represents the label, that is heavily influenced by one man, but capture a sound it does. From the deepness of Frankey & Sandrino’s remix of Kate Simko & Tevo Howard – ‘Welcome to PolyRythmic’ to Yotto’s firing remix of Sasha’s ‘Smokemonk’ each and every track are linked in sound or style to Sasha’s own thought process, and perhaps to go even further they are inextricably intertwined with Sasha’s musical journey.

There are eleven tracks in total, unmixed and in full in both digital and vinyl. Radio Slave opens proceedings with his epic eleven minute interpretation of Sasha’s ‘Cut Me Down’, the first release on LNOE back in 2011. Vinyl copies of this are fetching a whopping £100 a disc, and it is great to hear such a solid and emotive interpretation bringing Krister Linder’s vocal and some lush pads front of mix against a tribal landscape that works extremely well.

VONDA7 tackles Henry Saiz’s ‘I Can Feel It Coming‘ with her usual powerful energy, turning it into a heavy-hitting techno groover but saving some of that lovely melody for the final part of the arrangement. Locked Groove keeps it deep and smouldering on Max Cooper’s ‘Careless‘ and Fur Coat take a harder on Sasha‘s ‘Singularity’.

The compilation starts to really find its groove with Dubspeeka’s remix of Ejeca’s ‘HiRollin’ which is dripping in its own soulful juice, in that way when electronic music finds the sum of its parts and the whole moves something deep down in your psyche. In a similar way the brilliant Frankey & Sandrino’s take on Simko & Tevo Howard‘s ‘Welcome to PolyRythmic’ is extremely soulful, having all the right elements to keep it deep but elevate the feeling to an extremely high level.

John Monkman’s dub of Thermalbear’s ‘U Love’ is a detailed (in-parts) melodic, deep-techno stomper full of metallic glitches and dancefloor potential which has probably created the biggest buzz from any of the tracks on the album. The Baile remix of GHEIST’s ‘Somerset’ is an emotional, house-tempo, breaks remix that stands out in its own uniqueness. The many layers propel it to a filmic level of musicality that is useable in a performance setting but works beautifully as a backdrop for life.

Nicole Moudaber represents the harder, big-room techno sound that has become so popular over the last year. Whilst music like this has its place on the dancefloor I find it too stark to serve the original of Sasha’s ‘Vapourspace’ to good justice.

Similarly, Deadbeat’s Liquid Fire Dub of Rhythm Cult’s ‘Brutal’ was too minimal for my taste and whilst the original was deep it possessed a locked in grrove that propelled it upwards with a healthy dose of emotion.

Yotto’s remix of ‘Smokemonk’, however, is an absolute belter, taking the original track with its intricate melodies and utterly stamping it with his own style. There’s hoover bass, big analogue riffs, lush pads, big breakdown and a storming groove. An authentic remix that represents both Sasha and Yotto.

The only problem with LNOE 100 is that, as a representation of a body of work, it does not collectively gel as an album. It is arguably not possible for it to do so in this remix format. The common thread is that every remix is an interpretation of a track that was chosen by Sasha, by a remixer that was chosen by Sasha. It represents Last Night On Earth and the path it has travelled and by default Sasha’s own journey. I admire the creative freedom the label has given the remixers by allowing them to choose their own tracks. There are some exceptional remixes of some exceptional tracks and collectively they do tell a story. That story is about one of the most influential labels, DJ’s and producers of our time. Let it wash over you and be involved, after all it is the Last Night on Earth.