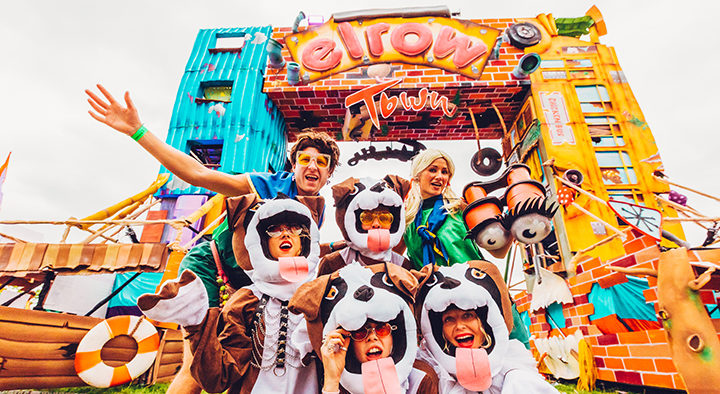 elrow Town returning to London and being pretty much on my doorstep, I thought it’d be rude to not go and see how their fun and games continued to translate in London. It had been a long time since I had first experienced elrow when they hosted an area at Lovebox years ago, but it was and still is hard to forget their inflatables and general madcap antics they’ve become synonymous for.

The day started off amusingly as I was waiting for my partner in crime at Stratford International station, as a strange balance of claret and blue wearing West Ham fans streamed from the platforms alongside an equal amount of glitter faced youngsters anticipating a fun day in the Olympic Park grounds. A middle-aged guy sat in front of me and quipped to a stranger “There’s a lot of people wearing glitter today, must be someone’s birthday” funnily enough it was my mate Aaron’s birthday, who I was waiting for, but he doesn’t do glitter, unfortunately. 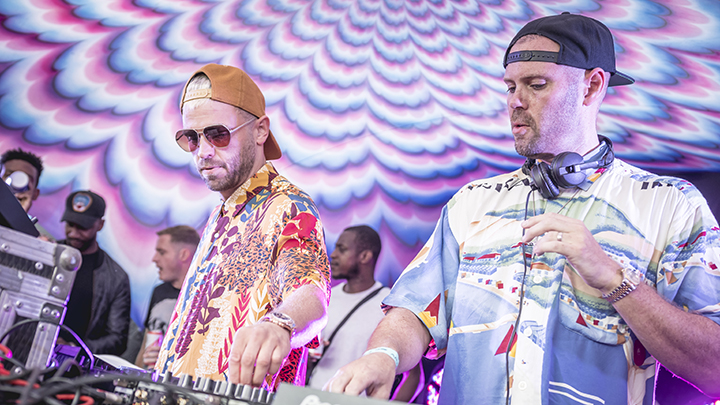 I really wanted to catch Solardo, who were actually doing a double shift and playing on the Sunday too, but today they were on early, so not much time for pre-drinks and all that jazz, it was time to check out what sort of madness elrow had created for this year’s festival?

The main stage was nuts, with the DJ booth a few stories up it looked like something that’d be floating around a unicorn’s mind after they’d been on an acid trip. If you can try and imagine that, then you’ll have a bit of an idea on how funky the stage was. It even made Solardo’s shirts look relatively boring in comparison. Their set for the time of the day was fitting. Energetic and bumping and they looked like they were having a whale of a time. 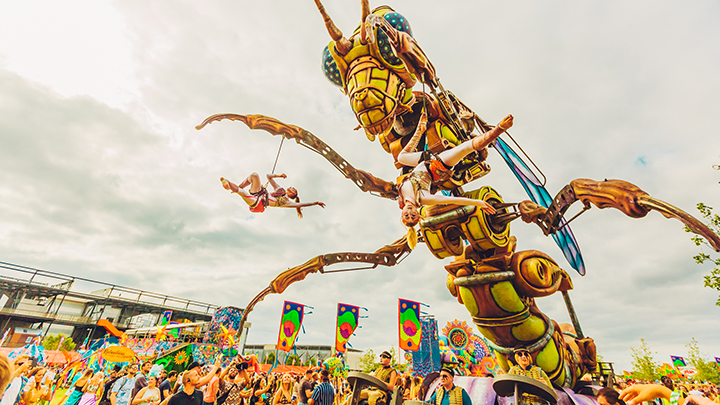 Time for the standard recce to see what else was on offer around the rest of the park. Plonked in the middle of everything was a cosy pink inflatable Absolut disco arena, complete with actual small roller skating zone if that was your thing. I’d not skated since the early 90s when Roces and Bauer were all the rage and I wasn’t good then, so didn’t fancy ending up in a heap, so swerved that for now and made a beeline for the second arena where we thought we were going to get a spot of waFF, but he hadn’t come on yet. As it was still quite early and the tent only half full, it gave me a moment to take in the scale of the production, which was like you were in a trippy Brazilian rainforest, complete with giant psychedelic lizard on the stage. It did make me ponder about other festivals that literally just whack tents up with a few lights, an LED wall and a confetti cannon or two at a push. I wonder if they feel they need to up their tent game seeing elrow’s production levels, or whether they think ‘sod it, people are buying tickets anyway, why bother’? 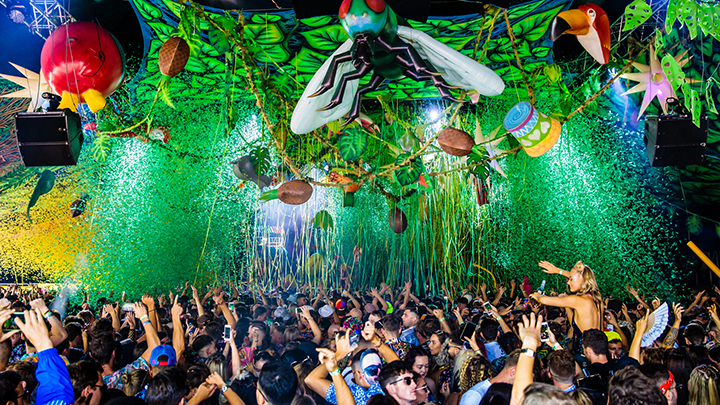 Now I’m going to get the fluorescent paint covered elephant in the room, or should that be festival, out of the way. The elrow attendees. I couldn’t help but feel that a lot of people here were there due to it being the next hyped thing to tick off the list and whack up on ya Snapchat or IG stories? At one point Dennis Ferrer’s ‘Hey Hey’ was blaring out the main stage’s speakers and by now it was packed and the crowd looked as flat as a pancake. I was ‘singing’ along to the Hey Hey parts of the track and got a look that if it could kill, I’d not be writing this review. Isolated incident? Not on your nelly. Strangely I heard Basement Jaxx’s classic ‘Fly Life’ played both at the main stage and the second arena and the tune barely registered. An old tune admittedly, but one with enough energy to raise the dead. The only times I saw a real collective amount of energy were on the mega confetti drops when people switched from being stush to being ten years old at Christmas.

Questionable crowd or not, we were still having a good time. We managed to catch waFF who handed over to Richy Ahmed and that section ended up being my musical highlight of the day with the pair of them playing some proper bumpy house beats that had some real mid 90s Strictly Rhythm feel to it. The majority I didn’t recognise and Shazam was about as useful as an ashtray on a motorbike, so I did what I know best, head down, feet moving, enjoy the vibe. Oh what’s that, it’s a crazy jungle tribe of people and animals on stilts walking through the crowd. As you were. 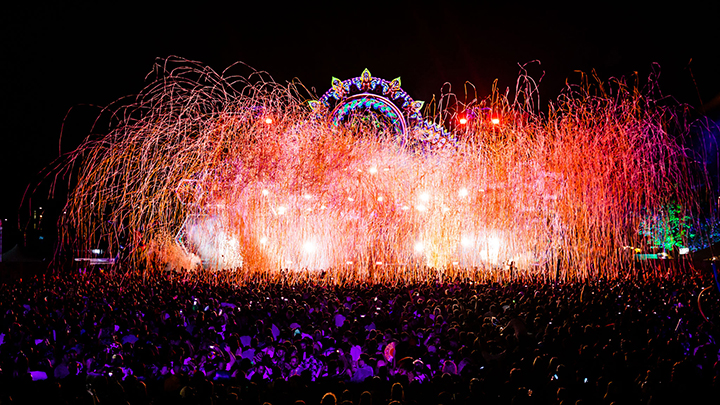 Even though there was a queue for the Absolut Disco arena now, I was able to convince Aaron to give it a go as Hifi Sean was on and I was keen to check him out as I’d always been impressed with his previous sets. An elrow Amy Winehouse-a-like and a pumping Hifi Sean set, which included a crazy ‘Vogue’ remix wasn’t enough to hold Aaron’s attention so we headed off to round out the day with a DJ as reliable as a German whip, Steve Lawler who was closing out the rainforest arena.

Before we caught Steve we did swing past the main stage one final time to catch Paul Kalkbrenner and marvel at the madness of the main stage that really came alive in the dark. Whilst there we got ourselves caught in a streamer storm that felt like a giant Spiderman had unleashed his spider web over the crowd. I had seen my fair share of moody elements across the day but in that fun 30 seconds, you could forget about it all, live in the moment and not need to film it, as you couldn’t due to being all caught up in mad colourful streamers.

If you missed out on last weekends debauchery, fear not as elrow is hitting Newcastle this Sunday with Loco Dice, Yousef, De La Swing, Melé, Waze & Odyssey and Eddy M! More info and tickets here