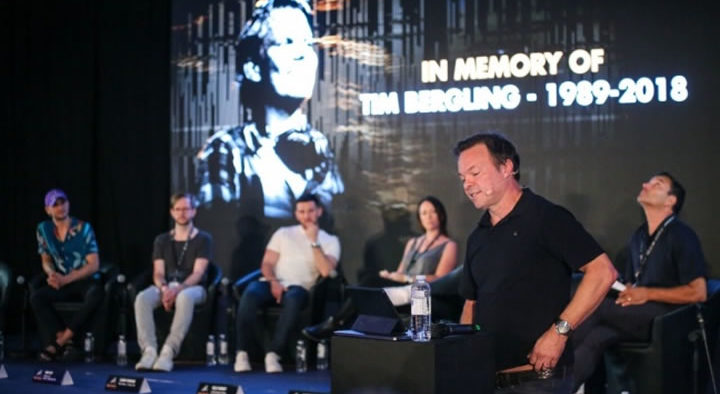 Real name Tim Bergling, Avicii died in Muscat, Oman, last month at the age of 28, you can read the full transcript from the speech below. 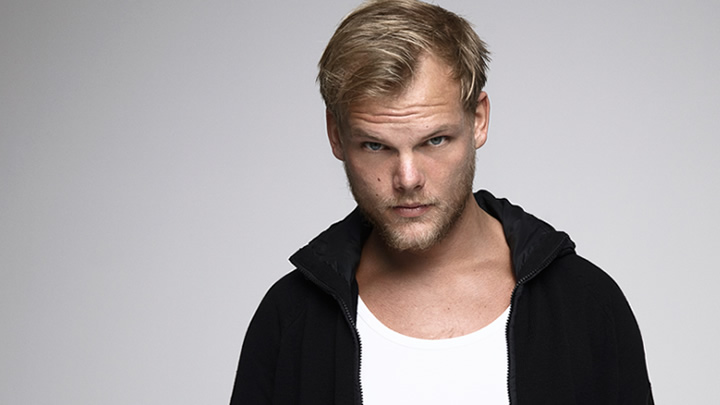 A month ago on Friday 20th April the world was stunned at the news that Tim Bergling / Avicii had died.

A few days later his family released a statement indicating that he had taken his own life.

How could this have come to be?

How could Tim, one of the most talented and successful artists of his generation go from making music in his bedroom in 2008 to taking his own life in a hotel room in 2018.

I believe we can find some of the answers, when we examine what it’s like to be a successful DJ/Artist/Producer and relentless globetrotting live performer in the present day.

From the start Tim was clearly a very special talent. His innate sense of melody, combined with his gift for arrangement and production set him apart, but what was truly unique about Tim in 2008/9 was that he was so young. He was the first teenager of the EDM era to make music inspired by his peers and then join them all within a matter of 12 months.

The warp factor speed of his breakthrough fuelled by the adrenalin rush and global connectivity of social media ensured that Tim’s feet never touched the ground.

By the time his track ‘BROMANCE’ hit, his contemporaries in dance music’s mainstream were the likes of David Guetta, Tiesto,The Swedish House Mafia, Armin Van Burren, Above & Beyond, Steve Aoki & Paul Van Dyk.

All of these artists had been in the game for at least 10 years, they had done the proverbial 10,000 hours and they had honed their skills and managed to work out a modus operandi, as their popularity grew and their diaries filled. They were certainly more prepared for what was about to happen to them over the next five years, than Tim.

Tim had no training, there was no apprenticeship.
He’d not even had a proper job.
Some of you here today have seen his documentary TRUE STORIES.
Whether its all entirely true or edited in a certain way – the journey and the results are pretty harrowing, particularly now that he’s not with us anymore.
For those that haven’t seen it…

The first few years are pretty straightforward.
You travel around the world at an insane pace. You collect all the money, You lap up the adulation and drink the free champaign and everything else that goes with it.

After a couple of years the anxiety builds as the schedule and demands get more and more intense. The entourage grows and there are now vast numbers of people and companies relying on your business. The bar is constantly being raised.

You now rely on the alcohol, the drugs and the pills, just to get you through each day.
Your tired, constantly tired and sick but you can’t stop.

It’s particularly daunting to watch – just how many times – he asked those around him – if he could stop and cancel shows. Most of the time he was told he couldn’t as there was too much at stake.

In Tim’s case his body did start to breakdown and after multiple medical interventions his health deteriorated to such a point that he announced his retirement in 2016. His last show was here in Ibiza at Ushuaïa at the end of that summer.

Last year Tim slowly started to release music again and when I interviewed him for Radio 1 he seemed in a really good place and talked with real passion about how making music, not touring, was what really mattered to him.

We might never know what happened in the end, what led him to taking his own life. What demons he was still dealing with or how much the anxiety played its part.

His family called him a seeker – “a fragile artistic soul searching for questions – when he stopped touring he wanted to find balance in life, to be happy and to be able to do what he loved most – making music. He could not go on any longer, he wanted to find peace.”

Tim’s story is unique – its the perfect storm – in the sense that few will ever be that young and that talented, making the right music, at precisely the time when a worldwide musical movement is about to explode, coinciding with – precisely the time – when social media was changing all the metrics on communication and having direct access to your fans.

Given they way it turned out I hope we never see it again – BUT his death has put the spotlight firmly back on our profession – The Life of a DJ .

For those of you who have either attended or followed the IMS on line – you will know that the subject of mental health has been on our agenda for many years.

Artists and DJ’s have begun to open up and talk publicly about the issues and their personal experiences.

In 2016 Eric Morillo gave us a very candid interview about his decent into drug abuse and near death to cope with the fear of failure and a decline in his popularity.

Last year in 2017 we hosted the launch of the Pioneer funded DJ Sounds documentary – WHY WE DJ – Slaves To The Rhythm – which we have just shown again this morning, where many familiar faces talk about life on the road – the loneliness, the anxiety, the depression, the ego.

One of the recurring themes that comes up – is that DJ’s feel stupid or ashamed to complain.

I used to liken being a DJ, to that of a lone stage actor, in the same play, night after night – but I have recalibrated that. Its more often being like a court jester at a medieval feast.

As Moby (who’s ten years sober) said in his recent Lefsetz podcast – even without the drugs and alcohol touring is unhealthy. If your a musician on tour you do your gig get on the bus and leave and even if there is a certain amount of degenerate behaviour its got nothing compared to the life of a celebrity DJ with private planes/Ibiza/Las Vegas and palatial hotel suits. You do your show and normally its back to the room for endless partying which is great to a point but so corrosive and destructive.

For most – the reality is very different – the constant lack of sleep – the airports – the flights – your exotic tourist experiences are often limited to the view from the back of a cab.

Most DJ’s will go will go though their whole career having to play clubs and festivals to make a living. It’s only the select few that will make money when there asleep through the success of their music.

In the underground world – endurance is king (or queen).

Marathon sets until sunrise and then almost certainly onto the after party… and if you really want the gold star, another one after that. In Ibiza you could be doing that for 20 weeks a season. It’s no wonder that a DJ’s musical output suffers when they have this kind of schedule. You need special forces training and an iron will to survive multiple seasons in ibiza – and after ibiza there is always another summer, somewhere else in the world – so you have do it all over again.

The downside of this cycle can be seen in Luciano’s heartfelt post on facebook a few weeks ago, lamenting Avicii’s passing and sharing his own harrowing experiences which led to near death in pursuit of the job, pulled out of a plane when his heart was about to stop. He talks about the recurring themes of loneliness and anxiety in hotel rooms after playing to 1000’s, the illness that touring generates, where in his case the only way to survive was to self medicate. Pills to wake up and pills to sleep. Hurting himself and others around him, ego out of control. ALONE.

He said if your 17 and join a top football team you have all the other players and coaches and management to prepare you for the pressure, money, travel and fame that might follow.
As a DJ he felt he was often completely alone.

No one prepared him for this life. No one warned him. There wasn’t a manual.

Luciano also revealed in the post – that he was celebrating one year sober since that incident.
He doesn’t blame the industry, he says ultimately the individual has to take responsibility.

He accepted he had a disease and when we are sick we normally go to the doctor for help but in the DJ world it’s just not spoken about.

Being a DJ doesn’t make you an addict but if you have those issues its a huge challenge.
In recovery they talk about changing the people places and things that trigger your use.
If your a DJ that means you really shouldn’t be hanging out in clubs but if your life and family depend on it, if you have a mortgage, school fee’s and bills to pay you don’t really have a choice.

You have to go back – and try to do it sober – often creating greater anxiety. Its a very unique and challenging scenario.

Luciano couldn’t at first understand why you would want to go out if you could couldn’t drink and get high but he’s learnt that he had a job to do, a great job and that every show doesn’t have to be a party (for him anyway). After six months clean he also re discovered that the reason he used to go out was to laugh and share and enjoy the music. He can do without the bullshit. When the bullshit starts he just goes home.

In my 40 years of being around this world I can’t think of a single person who’s achieved success who hasn’t paid a personal price via health, relationships, divorce, broken homes, addiction, depression and anxiety. The statistics don’t lie this is a tough business.

For years we’ve laughed and immortalised the hedonism of our world via books magazines and films like BERLIN CALLING & ALL GONE PETE TONG. It was supposed to be fun.

10 years ago when we started IMS all the talk was about how electronic dance music was going to break in America and conquer the world. To a large extent that all happened and is still happening… but people were not supposed to die chasing the dream

I don’t come here today to say the party’s over – but this is a wake up call to ALL those involved, to start looking around and see who might need help

In the past few months the IMS and the AFEM has been approached by more ands more people behind the scene’s – the managers, tour managers, promoters and music executives all feeling the strain of the life style and seeking advice.

IMS, thanks to the work of Ben Turner and Blaise D’Angelo have just completed the first Remedy State wellness retreat here in Ibiza. Designed specifically for people in the entertainment industry. It’s success proves that our industry needs healing, and that people want to be healed.

What I hope for and encourage during the next few days at the IMS and beyond – is that we get more of these issues out in the open and that the DJ’s and those around them feel less shame and more encouraged to speak up and seek help when they are struggling.

The wider music community have organisations like Music Cares & Help Musicians to reach out to in times of struggle.

I ask – Is its time to establish a support group or fellowship for those in the electronic music industry?

In memory of Avicii –
That is something to talk about.