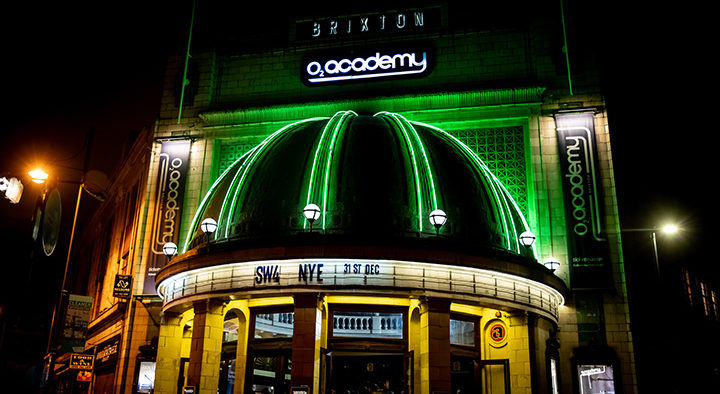 Notorious for hosting one of the biggest summer parties in London, South West Four festival celebrated their 15th anniversary this year. Welcoming headlining acts from the likes of legendary Drum and Bass dons, Chase and Status, and garage legend, Craig David, it would be rude to not do it all again for New Year’s Eve.

Taking over Brixton Academy for one night, the festival switched up the lineup but still stuck to the original vibes of the festival. With the likes of So Solid Crew holding down the fort for the garage scene, and Noisia and Dimension taking charge of the Drum and Bass corner, it sure was set to be an explosive evening to bring in 2019.

As the queue begins to grow and snake around the wall outside, revelers are huddling tightly against it to keep warm; but just as importantly clutching on to the last of their pre-drinks in old plastic water bottles.

Brixton Academy’s grand architecture remains largely unchanged since opening as a high class cinema back in 1929. With humongous oval arches, chequered marble floors and ornate ornaments dotted around the building, it’s seems almost too delicate and possibly the least likely place to hold a mental NYE rave. But the character of the building also contributed to SW4’s NYE rave being one of the best ways to bring in 2019.

Although three rooms were advertised on the line up posters, there was only really one room. The other two were pop up sound systems lingering in the foyer and near the cloakroom, but the crowds didn’t seem to mind as they popped on their sunglasses and set themselves up for the rave.

And of course, other than hardcore Drum and Bass heads, Noisia, were there to perform the countdown set. As one third of the trio arrived, the anticipation of their set was high. Praised as one of the most technically talented producers in the scene, they managed to batter Brixton Academy with their dark, twisted sounds. As the clock got closer to midnight, the pace sped up until the giant countdown clock illuminated the room with one minute left. As the clock turned 12,  huge showers of confetti and indoor fireworks exploded over the audience as they hugged each other and cheered to a great year ahead.

As we continued to explore the historic venue, we noticed that the VIP area had long lost control of its exclusively, with the bar brimming with ravers dancing to a rough tempo drum and bass takeover. The chaos continued, with an abundance of up and coming DJs and MC’s taking their shot at impressing the crowds. It was completely unpredictable, but that’s what made it one of the biggest highlights of the night.

Whilst some ravers were starting to flag, others were powering through as we were well into the early hours of the new year. But for those who were running out of energy, London based producer, Dimension, would soon change this as he took his visual and live experience to the theatre stage.

Chopping through his impressive catalogue of dance floor drum and bass, Dimension is one artist who’s at the top of his game. Stylishly dressed in black, his illusive figure mystically takes control over the audience, almost as if he can hypnotise the crowds with his tracks. Causing havoc with tunes like ‘T‘ and ‘UK’ the room begins to bounce with the weighty synthetic 4/4 style drums.

New Year’s Eve will always face competition, but if SW4 can come up with another lineup and venue even half as good as this but perhaps more affordable, next year will be a definite contender.