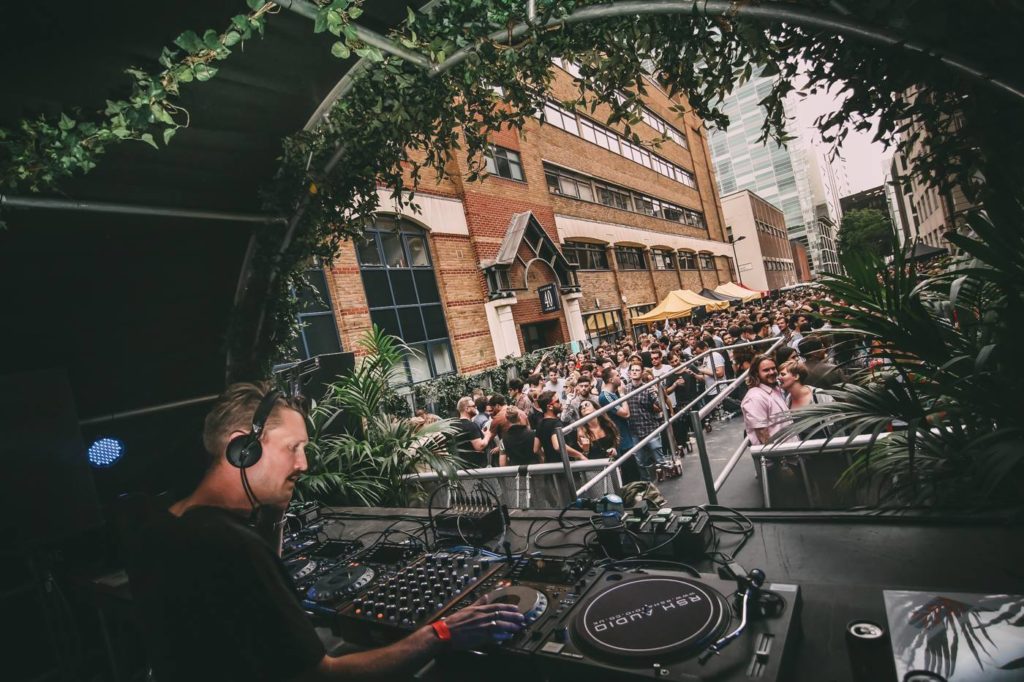 In 2012, brothers Danny and Keiran Clancy otherwise known as Krankbrother decided to host a street party to celebrate East London’s thriving electronic scene. 5 years later… and the duo are continuing to deliver one of the boldest street parties in London.

When arriving at Old Street station midday on Saturday, I was greeted by the sounds of melodic house echoing in the heart of Shoreditch. Before you even arrived at Christopher Street where the party was happening you could feel the buzz of excitement in the air. I followed the crowds to the sound of the music and where the electronic magic was happening, which by 2pm was already incredibly busy. Although the location had been carefully planned out, temperatures had peaked to nearly 27 degrees – which was a tad unbearable when there was a 200m queue to the entrance and little shade to cover under. After around a fifteen-minute agitated wait to get into the party, I was surprised and confused to see a long queue of people standing in the opposite direction. I soon found out that this was actually the waiting line for the toilets which was unendurable when you were battling with the heat. I understand that the street has limited space for amenities, but it was frustrating to see that there were only around 15 toilets and probably close to a thousand people. That being said, the mood soon changed when the summer sounds of Mr. Scruff filled the compacted and intimate space and you could see that everyone was having the best time.

And it didn’t stop there – the atmosphere was electric from start to finish. I had to take a minute to think about where I was – in the middle of Hackney in a street dancing away with the sun belting down on us. It really wasn’t like any other street party I had been to before. The party kicked off with Mr. Scruff, famously known for his pioneering marathon DJ Sets and eclectic music taste. Positioned at the far end of the street on a large stage, Mr. Scruff began his set at 1pm and finished a triumphant six hours later. His beautifully produced set spanned a mixture of genres; from disco to house, funk and soul, to even playing “Rock the Casbah” by The Clash. Of course, the Manchester-born electronic producer and DJ had to play his infamous 1999 Ninja Tune release “Get a move on” which sent the crowd into a crazy cheer.

Food stalls were positioned alongside the road as well as one long bar where you would expect to pay the same standard London prices for a summery British bev. The grub was particularly good, with a tasty handful of mac and cheese to keep the energy levels flowing! It was evident that a seating area was needed, as punters started to scatter themselves across the entrance to the party in a bid to save their legs for the final stint of the day. 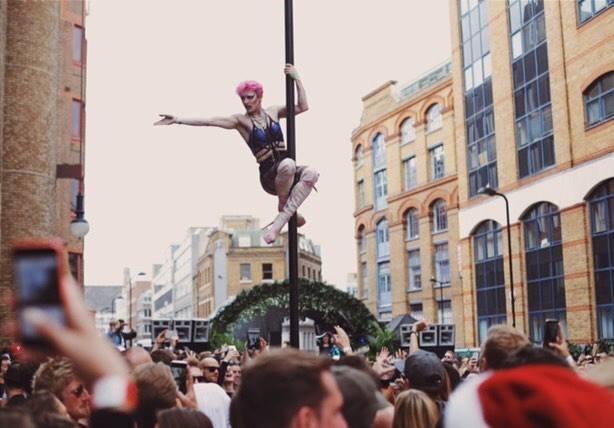 Todd Terje’s set marked a significant shift in atmosphere with the crowd hurriedly scrambled together to get a glimpse of the Norwegian disco king. The set truly celebrated the electronic music culture, igniting everyone into a dance and an overwhelming atmosphere. Although the air was still humid and clammy, Terje’s set delivered tasty disco numbers and even old time classics such as Stevie Nicks “Stand Back”. As the sun starting to settle through the office blocks, you could see people staring through their windows in awe from above as they looked down on the throng of revellers. Towards the end of his set, the punters erupted into a dance when the “King of Summer Jams” played one of his funkiest tunes “Strandbar”. Although the set was short, it was packed full of rich disco tunes and refreshing funky rhythms.

Before Krankbrother came on, people started to filter out and the space became easier to move and dance. The London-based duo ended the night with a dark, dramatic and captivating 2 hours filled with full-blown techno and acid, displaying an energetic aura throughout. You could tell that Krankbrother were absolutely loving it – which was radiated towards the fans and throughout the final minutes of the set. The duo dropped “ghetto tech” track Alarm by LA-4A and Parris Mitchell’s “F*** that M***** F****** B****’ to climax the night. And if you didn’t want to stop there, then just around the corner Village Underground were hosting the afters, where Solar, Michael Serafini and Krankbrother could be seen.

All in all, this street party is just an example of how our important it is to celebrate the music culture and it really reflected real passion for the electronic scene.

Tags:
Previous Article
Premiere: Toyboy & Robin – This That
Next Article
An Artists Beginners Guide to Setting Up…. Spotify