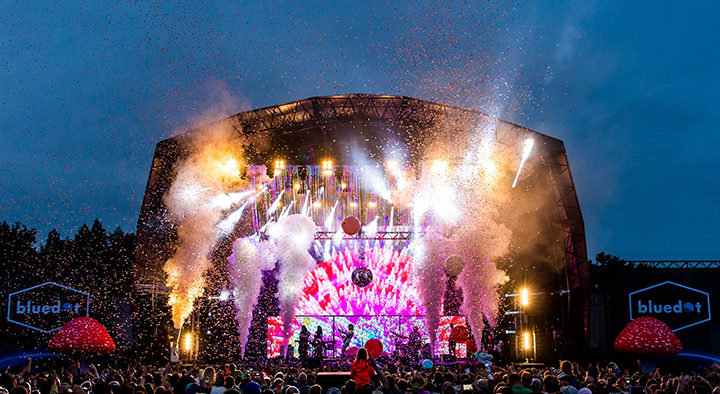 The UK is an industrious country and a festival hub, but despite being two of the islands defining characteristics, it is extremely rare that the two worlds collide. It has always seemed odd to me that industrial spaces have failed to make it out of the realm of the club and free party scene and onto the festival circuit. Mainland Europe is a different story altogether. A brief exploration of the Netherlands and Germany alone reveals a huge variety of sites that step away from the traditional field and foliage for a different approach. Factories, airfields, oil rigs, bunkers and powerplants galore, Europe has a penchant for utilising industrial space and I think it is something the UK is crying out for. Then along came Bluedot, set in the grounds of Jodrell Bank (an observatory site owned by the University of Manchester). The site is a home of space exploration and served as a whole new concept for what a festival can be. The Lovell Telescope is the dominating feature and an absolute marvel of engineering, a talisman of sorts for the industrious nature of the Mancunian North. If you haven’t had the joy of seeing it up close then the pictures will have to try to do it justice. This thing is an absolute beast and genuinely makes you feel rather taken aback as you approach the site through the fields of Cheshire. Upon arrival, it becomes immediately apparent that the telescope isn’t the only thing that makes this site special. Although it is spread throughout the forests and fields there are an array of other dishes, light and sound installations and so much more. An absolutely huge globe sits floating amongst the trees in the forest, lit and slowly rotating, there is a steampunk style fire area full of strange and bizarre fire-breathing contraptions and everywhere you turn there is something that catches the eye. Perhaps most importantly this is a weekend of education and learning with science at the core. With various discussions and lectures on the universe, our place within in it, sustainability and much more all in the midst of a serious musical line up. Whilst I dabbled in some of the educational sides, it was my job to explore the musical elements and certainly didn’t shy away from the task at hand… 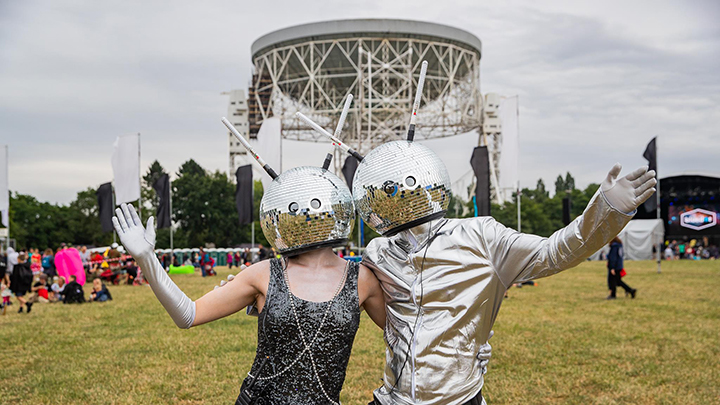 The crowd were a serious curveball. I had been expecting a healthy mix of punters here to party and then families here to entertain their kids, sit around in the sun and learn a thing or two about the universe. All in all, this was a pretty fair assessment. What I was not expecting was the kind of families that turned up… if I’m being honest my worry was that this would feel like a family day out, an excuse to go and do something to entertain the kids and that a lot of the music, particularly the electronic side of things would largely fall on deaf or disinterested ears. How wrong had I been?! This was the realm of ‘the old party dad’ and the ‘let’s have it mum’. This was an introduction and a lesson into mum and dads world and if anything they were going just as hard (if not harder) than all the rest of us! 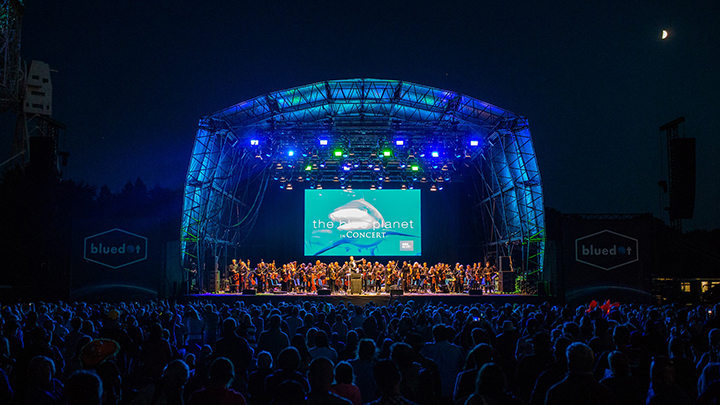 The opening concert on the Thursday was absolutely incredible. As everyone sat in wait for the big show, the unassuming and brilliant Laura Misch took to centre stage. Using live loops, drum pads, mike and sax, Laura intertwines, layers and entertains with a sweet confidence that won over everyone that sat to listen. As the beautiful tones of Laura’s sax ebbed away and the sun dipped behind the clouds, we applauded the arrival of Blue Planet & The Halle Orchestra. This was an experience. As a big fan of the programme, I had some idea of what was to come… the deep, some beautiful, colourful fish backed by a string section and some uplifting horns to set the tone for a nice family friendly weekend right? I think not. Although there were some friendly and sweet moments to the performance a lot of it was absolutely brutal! As the fairly middle-class crowd sat around on their picnic blankets with their children enjoying a nice sunset, The Halle Orchestra played the ominous soundtrack to some of the most epic and terrifying scenes ever captured at sea – with a huge dominance of Killer Wales. The most traumatic scene was undoubtedly the killer wales targeting another wales child, as they slowly attacked them both over about a 10 minute period and eventually drowned the young with the parent left to continue her journey alone. There was children crying everywhere around me and everyone was locked to the screen with an open jaw and wide eyes. It was brilliant and the soundtrack was deep and haunting despite its dark nature. That being said it did feel rather odd to be sat casually watching the brutal death of some of the planet’s most magnificent animals whilst we all enjoyed some classical music and drinks on the lawn – it all felt a little Hunger Games… Right from the off I decided there and then that you couldn’t second guess this festival whatsoever and that the old phrase ‘to assume it to make an ass of you and me’ had never been more appropriate. 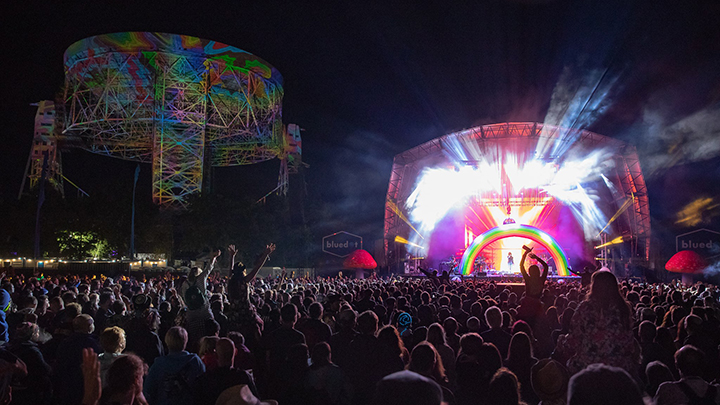 Whoever was behind the bookings this year had a really interesting agenda and it was novel to see a list of names that were not to be found at every other event this summer. Mad Professor surprised the dub fans and came out with a hard, new school jungle set that got things moving nicely for Roni Size (performing New Forms Live). Much of the sound on site up till this point had been fairly tame and this wet the whistle nicely for the party to come. Ana Matronic (of the Scissor Sisters) then played a DJ set in a tribal funktronica style with a hard 4×4 set up and a sinister balaeric undertone. Eventually came the Roni Size experience. What had previously been a fairly vague space had been transformed with visuals on a huge screen in front of the booth. The set went hard and deep from the off as expected, with a live video of a double bass (perhaps Roni’s signature instrument sample) being played continuously throughout the set in time to the music. The effect was mesmerising and the energy was flowing full force. 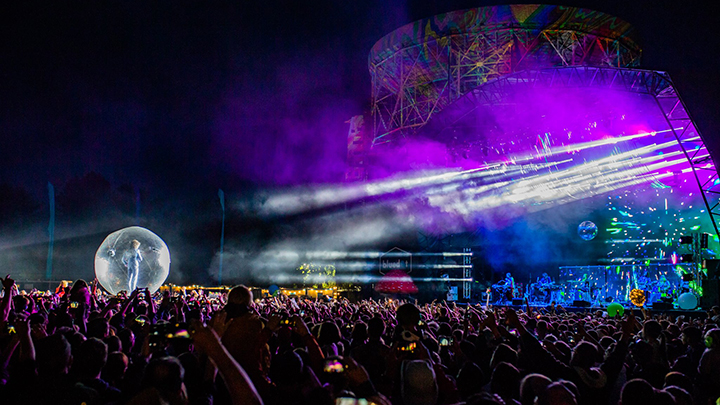 The Flaming Lips are one of those bands that you really just don’t understand until you see them live. If they were to come on the radio I don’t know if I’d listen to them or not if I’m honest. That being said these guys put on a show and I will never in my life forget stumbling out of a dance tent to see a giant pink inflatable robot taking up the entire main stage, spitting gigantic multi-coloured bouncy balls out of its face and into the crowd. Within seconds there were hundreds of them floating slowly through the air until they reached the eager hands and fists of the crowd to send them back into orbit. It was one of the most amazing and bizarre festival sights I have ever come across. 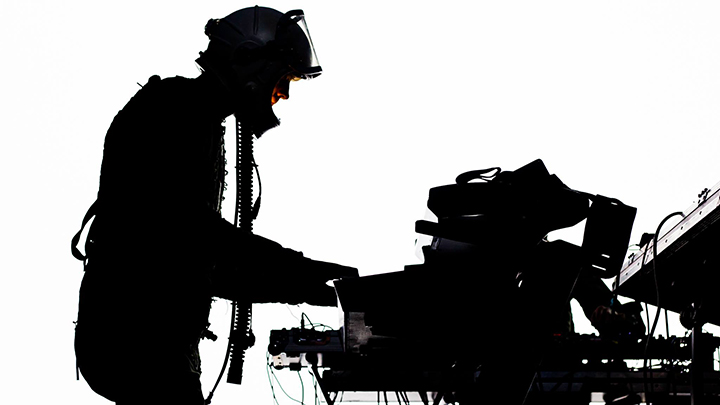 Speakman Sound were a very apt booking for this futuristic space festival as they stepped on stage in their silver geometric masks. With a powerful, energetic drummer and a serious synth set up with mini Moog and keys galore – these guys took us from tribal house, through garage and trance and almost made you feel like you’d stepped into a club in a Ridley Scott tale. There were elements of Moderat and Thom Yorke in the performance and it seemed like the two have a rich and intriguing musical background that I am very keen to learn more about.

Spacecassette kept things rather weird and laid on a crazy interactive show. After an alien-esque opening announcement we were introduced to ninjas on keys and drums – apes were dancing around to big synth lines and hypnotic trance lines pumped through the tent in what felt like a really strange dream. 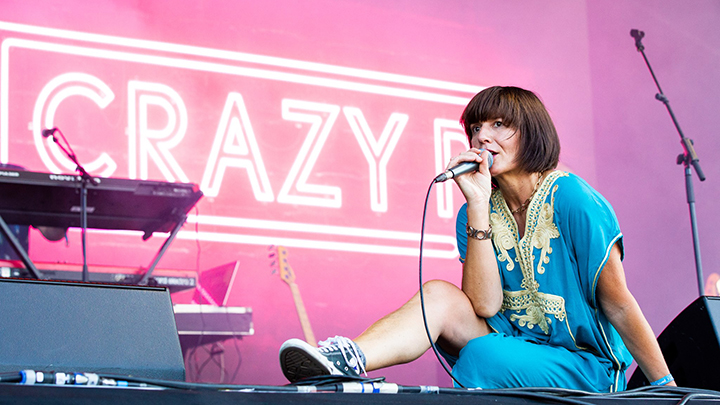 Crazy P were undoubtedly the highlight live set of the weekend and seemed to have the biggest impact on the dancing shoes at the main stage. Live disco bands of this sort are few and far between these days but these guys have been pushing the sound and arguably leading the UK disco revival since 1997! When you listen to their distinct brand of future disco it is easy to forget that they’ve been doing this for so long, it’s almost like the more they release the more relevant and integral they become. Perhaps the biggest clue comes from the band’s ability to weave genres and influences quite so elegantly – as this time the crew danced the careful balance between tough deep and soulful funk, inclings of acid house and bigger hard-hitting 4×4 tunes all with a soft disco vocal melody. Danielle Moore, the Mancunian front lady, was classy as hell and relished the opportunity to entertain the home crowd. An absolute stormer of a performance all around.

Keeping things homegrown the Mancunians continued to impress, as what was arguably the best DJ set of the weekend came from Kerouac (LOVE DOSE/ Reform Radio). With a backdrop of old-school Playstation 1/early windows media style graphics, the reserved character started with rolling deep house with nice delayed snares and clicks and through into wonky slow techno and downtempo Arabic influenced house. People were seriously getting down and the energy and mood was all round infectious. 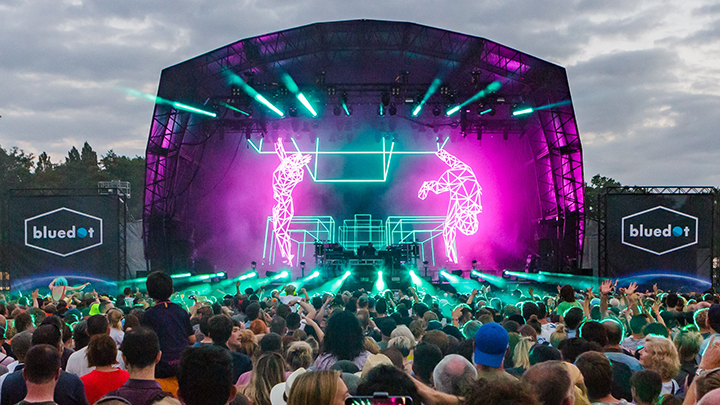 The Chemical Brothers did what they do best and put on a proper party with the most interesting and experimental use of the lighting rig we had seen all weekend. As an assault of green lazers came out with a giant evil looking white zombie king on the screen, we were all reminded why the duo has been around for so long. Serious business. Although things eventually drifted a little too far into T4 on the beach, the set was a nice throwback and an apt way to send things off with a bang on the last day.

As I walk home through the forest to the campsite and catch sight of another huge satellite dish poking through the trees, I can’t help but feel like I am at a party at a rebel alliance hideout or another planet that some lucky few have been taken to. But this is not the case, we are on earth, we are on the pale blue dot and what a place it is!

Bluedot Festival is back for 3rd year