The 1990s is rife with defining moments for many of hip hop’s elite. Countless name-making debut albums were dropped, some of the finest MCs lost their lives, and for a young duo from Philadelphia, the unlikely move to television was to be the ticket to worldwide adoration. We speak of course, of Jeffrey Townes and Will Smith – aka DJ Jazzy Jeff and The Fresh Prince – purveyors of exuberant, catchy hip hop and fly-handshaking best pal stars of The Fresh Prince of Bel Air.

However, whilst the show sent leading man, Will, shooting into the Hollywood stratosphere, Jeff kept his feet planted firmly on the ground. The DJ remained where a DJ belongs, behind the decks, and deeply dedicated to the music. Now 50, Jeff is still touring the world as a highly sought-after selecta, and where happens to be one of his favourite stops? Well, it’s only merry ol’ London town.

It isn’t the Boris Bikes or the opportunity to ride the world’s most anti-climactic Ferris wheel that has Jeff eager to return the capital however. It’s one specific night, just as dedicated to hip hop as he is: The Doctor’s Orders. And even more specifically than that, it’s The Doctor’s Orders Birthday. Tenth Birthday. A milestone for the brand, a key date on the calendar for Jeff, and a reason for Data Transmission to get so giddy during an interview that we’ll be smiling until the eleventh.

“ the cool thing is to be around to watch it [the scene] change periodically over and over again; especially when you watch it change to the point that it’s almost coming full circle. It never comes back to where it was, but it always comes back with a resemblance and a little bit of twist.”

Purity can be a troublesome topic in hip hop. The genre has come so far in the last 35 years-or-so. Sounds have changed. Values have changed. It’s easy for the concept of purity to be used as a weapon against the new. But Jeff isn’t about to start picking apart the thing he loves. “I think that it’s always evolving and it’s always changing and we’re going through another change now,” he tells Data Transmisson. “I think the cool thing is to be around to watch it change periodically over and over again; especially when you watch it change to the point that it’s almost coming full circle. It never comes back to where it was, but it always comes back with a resemblance [and] a little bit of twist.” Jeff cites Brooklyn upstart, Joey Bada$$, as an example. “[He] almost represents what we had in the ’90s. It’s cool for guys like us to have been around in the ’90s and then be around to watch him.”

Jeff isn’t one to shun the future, all he asks is that the roots not be forgotten. “I think it’s more to do with remaining a student,” he says, explaining how he keeps his own sets fresh – whilst still satisfying the old heads. “I’m always gonna have all of the old stuff, but keeping my ear open to all of the new stuff, just adds extra stuff to my repetoire,” continues Jeff. He recalls how, with the explosion of EDM, many of his fellow hip hop DJs defected to the new craze, forsaking the foundations they’d built themselves upon. “I don’t think you ever take something out of your arsenal,” he asserts. “[Now] I’m watching guys that looked me in my face and told me they no longer played hip hop, go back on what they said. And I’m like, ‘You shouldn’t have stopped!’”

It’s his embracing of the new that Jeff believes is the key to his longevity. “I’m always listening to new music,” he says. “I’m one of those guys that keeps a jump drive with me, so if I hear a DJ play something and I don’t know what it is, I’m the first person to ask him, ‘What is that and do you mind if I get it?’ And likewise, I’m very forthright and I’ll say if you like anything that I play, just get me a jump drive and I’ll give it to you.” Looks like sharing is caring after all…

Jeff’s talk of jump drives (flash drives or memory sticks to those who don’t speak American) raises another question about authenticity via another of hip hops oft-forgotten roots: turntablism. Like most DJs, Jeff has made the transition to digital, if only for the sake of less hassle whilst touring. “You’ve gotta look at it like, who’re you playing for?” he begins. “You’re playing for the public. The public doesn’t care if you’re sick, the public doesn’t care if you’re tired, the public doesn’t care if you lost your records. I just wanna make sure that I can give [them] the best show that I can, no matter what.” Still a turntablist at heart however, Jeff sees the art of scratching as simply on the back-burner, rather than entirely deceased. “There wasn’t a time that it ever stopped, it just might not be the most popular,” he explains. “There was a time that there were more people buying turntables than electric guitars, and it changed. But now we keep getting reports in that vinyl is selling more than it’s sold in the past 10 years.”

It seems Jeff’s theory about hip hop going full circle is determined to be proven, but that means taking both the good and the bad. As we discuss Jeff’s vinyl heritage, talk turns naturally to one of his most recent wax-centred endeavours: performing the scratch overdubs for N.W.A. biopic, Straight Outta Compton. “I got a text message that [Dr.] Dre was trying to get in touch with me, and I immediately thought it was a joke,” recalls Jeff. “Then three minutes later I got another text message from someone else, so I thought it was an elaborate joke. Then an old manager called me and said ‘Hey Jeff, Dre is trying to reach you!’ Ten minutes later he called. It was right after the Apple deal, and it was great because he stopped me right in the middle of congratulating him and he was like, ‘So hip hop right?’ We just burst out laughing.” Jeff humbly recounts how honoured he felt to be offered the opportunity to be a part of the film, yet it is the poignancy of his next statement that really drives home what going full circle can unveil. “[What] the movie really gives you [is that] there was a reason for their anger,” he says. “The stuff that was going on in some of our neighbourhoods, and some of the stuff that we were subjected to – there was a level of anger that made us express ourselves in that manner. I think what a lot of the younger generation got out of it – from the police brutality and other things it addressed – is that not much has really changed.”

“If it wasn’t for the civil rights movement, you would have never got Marvin Gaye’s ‘What’s Going On’. There’s so many great albums that are spawned from those types of situations and I think that’s very, very important to notice. Music is the ultimate level of expression, especially in hip hop. That was the way that we expressed what was going on, [it] was almost like our newspaper.”

We discuss the worrying state of affairs in the U.S. at the moment, where new cases of police brutality against African-Americans have been appearing at an alarming rate (what’s even more frightening are the cases that don’t go public). “There’s an eerie similarity between what [N.W.A.] went through and what people are going through now,” explains Jeff. Data Transmission make the point that musical creativity has been known to flourish in times of strife. “It definitely sets a tone,” agrees Jeff. “If it wasn’t for the civil rights movement, you would have never got Marvin Gaye‘s ‘What’s Going On’. There’s so many great albums that are spawned from those types of situations and I think that’s very, very important to notice. Music is the ultimate level of expression, especially in hip hop. That was the way that we expressed what was going on, [it] was almost like our newspaper.”

As we come to the end of our chat, Data Transmission feel obliged to return to Jeff’s own past; to the place that – althought not the start – was undoubtedly the beginning of something special. We’re slightly nervous to ask about The Fresh Prince of Bel Air, suspecting Jeff may be tired of the association. We’re mistaken, of course. Jeff gives a knowing chuckle as DT hesitantly ponder whether he considers the show a help or a hinderance, before proceeding to answer us as enthusiastically as if it were the first time he’d been asked. “I can’t even put it into words how much that helped,” he beams. “I’ve always said, you don’t realise the impact of something whilst it’s happening. You put it into perspective today… I’m travelling around the world doing 160 shows a year, and there are people that don’t know that I started off in music. But you know what it made me realise? I don’t care why you know, just as long as you know.” And just to let you know; he’ll still only do the handshake with Will. 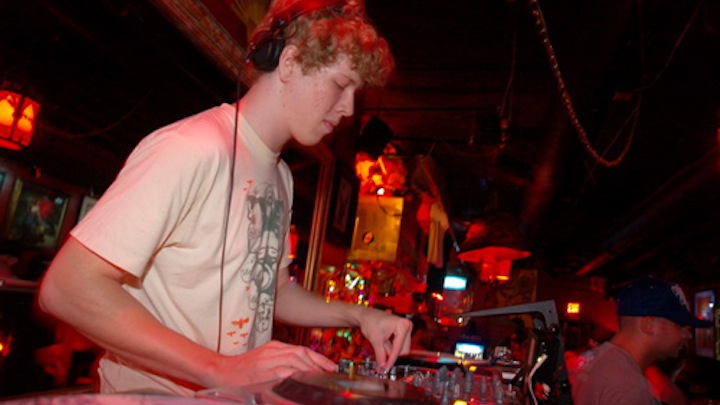