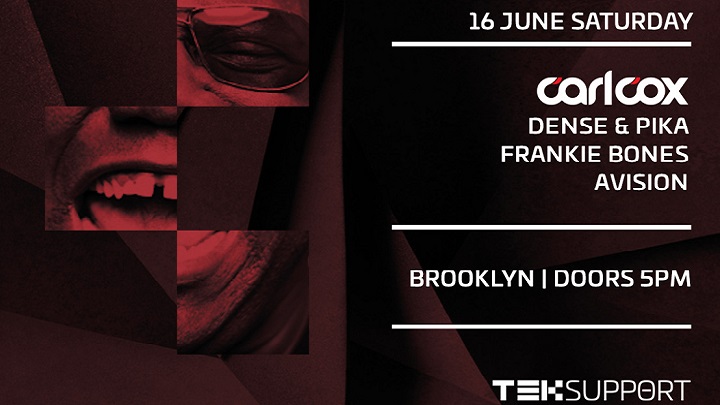 New York’s curators of the best in underground, Teksupport have announced a day into night open-air event featuring one of dance music’s undisputed kings, Carl Cox.

Carl’s unmatched contributions to electronic music culture have earned him a global following at every level of his pivotal 30 year career. From his early pioneering of Acid House and Electro in the eighties and nineties to his continued championing of Techno, Carl has applied unbounded support to the music and community he has helped create from its foundation. It has been through a deep connection with the dance floor that Carl has seen such continued fandom with his 15 year Space Ibiza residency becoming one of the Island’s most historic pillars.

Carl Cox returns to NYC on Saturday, June 16 to celebrate the beginning of summer for an idyllic open-air Brooklyn event. This will surely be one of the few times to see him in North America before heading off to Ibiza for the summer season. He will be joined by a who’s who billings of support acts including UK house and techno giants Dense & Pika, NYC legend Frankie Bones, and Carl’s own Intec label mainstay Avision.

Avision release his ‘What you Wanted’ EP
Grahame Farmer January 29, 2019

Avision Chats How to Get Signed & Music Production 

Avision releases his debut album ‘In My Mind’

Avision release his ‘What you Wanted’ EP