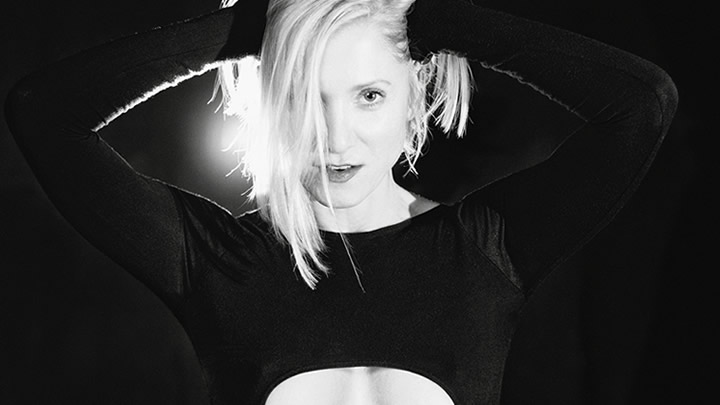 Last Friday saw The Cause work in conjunction with E-late, Unknown Artists, and Till Last Track, to throw a spectacular party with none other than Ellen Allien as the headliner. With support scheduled from Garry Todd, Marc Jarvin, Elia Cordaro, and a Room 2 takeover from Unknown Artists, my expectations were high. There are three words I would use to describe this event in hindsight – hot, sweaty, and unforgettable!

Let’s start with the venue. Hidden in the depths of northern London, The Cause is quite honestly one of the most unique places I have been this summer. Having spoken to the sound engineer at the start of the event, I learnt that the venue had been built partly by himself, including the subs sitting in the second room, where Unknown Artists were set to entertain for the evening. Inside the main room, the booth is swallowed into a cage, with the ceilings at a very low level, and pillars lining the room. The venue is about as close to the Berlin techno scene as you are going to find in London. The sound in both rooms was also extremely good, and throughout the night things were run very professionally and efficiently, ensuring a good party for all. Like many of Berlins venues, with their low ceilings, The Cause was also extremely hot. By the time the place filled up, absolutely everyone was a sweaty mess, without exception. However, one thing I will say is that anyone who is partying in these kinds of conditions…..actually wants to party! 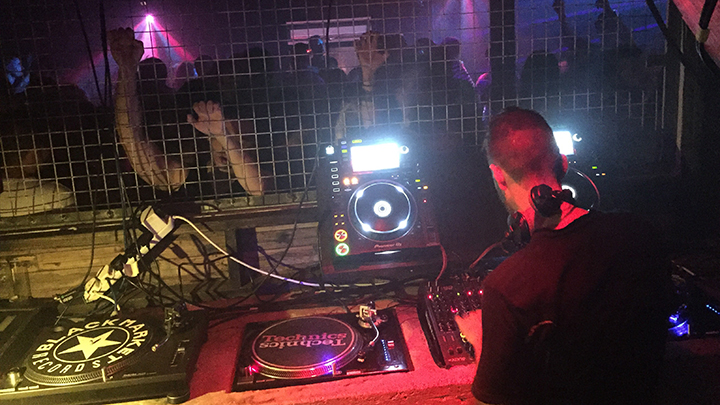 Upon arriving at the event, Marc Jarvin was in full swing in the main room. Prior to the event, I had done a bit of research on Jarvin as I had never had the opportunity to see him perform before. His biography is one of the weirdest and most entertaining things I have seen from an artist, but upon entering the venue it started to make a bit more sense. Kicking things off with a huge amount of energy, you could tell Jarvin was having a lot of fun as he played. Smiles all over the shop, dancing around, getting the crowd going, this was someone who wanted to start the party with a bang! A particular highlight from Jarvin’s set was when he dropped GMT’s remix of ‘Decompression’ by Mathew Jonson. This track gave a clear indication where the crowd was going that evening. With a big smile from Jarvin, and shouts from the crowd, there was no doubt that the swarm of people in the main room were now as energetic as their DJ.

Next up was Garry Todd. Originating from sunny Sunderland, Garry is someone to keep your eye on, believe me. Spending his year alternating between Australia and the UK, this is an artist looking for the most out of life, and music. His Bread & Butter parties are becoming legendary and it’s not rare that he’s played headliner-sets at festivals like Playground Weekender and Stereosonic, alongside artists such as Jimpster and Ricardo Villalobos. Keeping the energy active, Garry nimbly took the crowd raging throughout the House genre, creating a perfect platform for the night’s headliner to take to the cage. This was not to be the last of Todd that night! 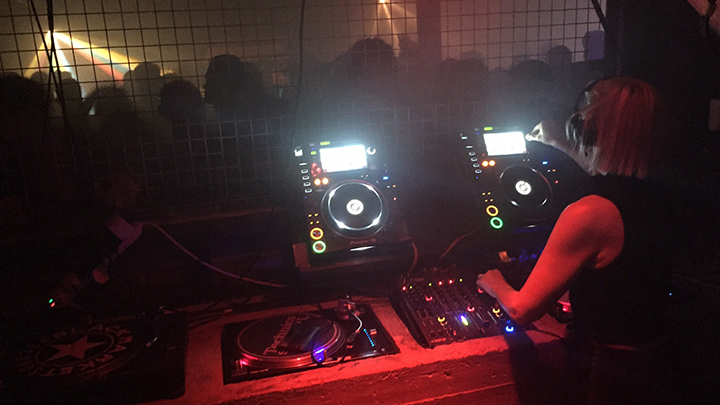 It was now time for ‘Berlins Queen of Techno’– Ellen Allien! To be able to witness Ellen playing is this kind of establishment in London, is extremely special, and rare. By this point in the night, the main room could not have been busier. All you could see was a hazy mass of hot and sweaty ravers going at it with nothing to hold back. With Ellen doing her usual slick and perfect alien shuffle in the cage, she took the crowd on a journey that I can honestly say is to this day, my favourite set I have ever heard her play. So much variation, so much groove, and all accompanied by those renowned heavy hitting techno foundations. Three hours of this kind of talent and perfection is something that you don’t forget easily. I believe everyone that night would agree that she did not hold back for one second. A particular highlight for me was hearing ‘Alienated 2B’ by Alien Rain pounding through that venue. That acid, hand in hand with stomping techno. You can’t beat it. I have heard Ellen play this out before in previous sets but this topped them all. The venue and the sound system making me think I was in Berlin, Ellen dancing her socks off in the booth, and a crowd that was loving every second they got to witness – absolutely unforgettable!

Following Ellen, saw the return of Garry Todd. Garry jumped back into the booth to take over from his fellow BPitch Control veteran. These two artists sound extremely natural when transitioning from one act to the other. It’s a pleasure to experience. Garry entertained the crowd for a further hour before doing a quick B2B with the final act of the night – Elia Cordaro. Their B2B was absolute filth. With tracks such as ‘Garys’ by Ploy, it was clear that the crowd weren’t going anywhere. They were going to see this through to the last track of the night. We were now down to the final hour of the event with a solo performance from Elia on the agenda, to see the night out.

Originally from Tuscany, Italy, this introspective and peculiar young man is every bit of a creative genius that you want to see in a musician nowadays. As a result of his dedication to the art and his seemingly flawless technique, every set that I have been lucky enough to witness, has consistently captivated me. Elia’s ability to adjust to any environment he plays in, and ensure that every member of the crowd is enjoying themselves, is truly mind-blowing. I have a huge amount of respect for this guy and I believe he is going to go extremely far in the industry…. it’s just a matter of when. The final hour was a blur of heavy thumping techno with smiles beaming throughout the establishment. The final track to boom through that sound system was ‘Form (Chevel Remix)’ by Oscar Mulero, bringing an exquisite end, to an exquisite night.

As a finale to our review, we have also been lucky enough to receive an exclusive release from Elia Cordaro. This is only available via the link below.