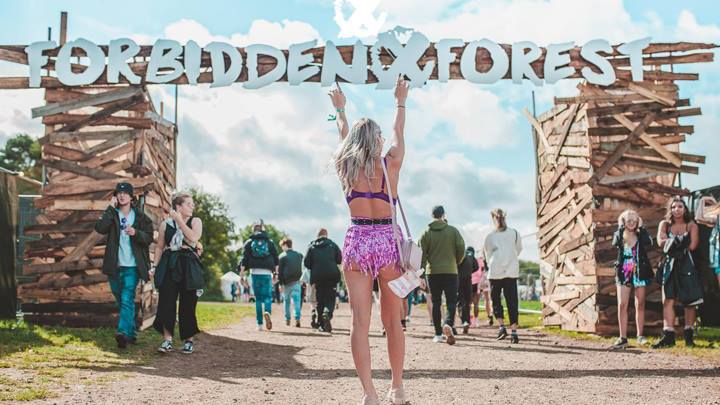 After an amazing ‘17 festival season it was time to end on a high, with that I made my second journey of the year up north, for the fantastically named Forbidden Forest. The forest rave uses the beautiful landscape of Donnington Park as its backdrop, which creates an Alice in Wonderland experience that I feel no other festival has been able to achieve, at least not in my experience!

First debuting in the Derbyshire park in 2016 with two sell-out dates in May and September, with the promise of a diverse musical experience including artists such as Richy Ahmed, Solardo, Chris Lorenzo and Big Narstie on the lineup, they truly cemented themselves as a festival to keep your eye out for in the years to come. This year they continued where they left off with a collection of noteworthy dj’s across both festival dates and musical lineup to suit the more diverse palette. April’s edition hosted wAFF, Latmun, My Nu Leng and TDQ on the bill starting the summer with a bang and September followed suit presenting Bugzy Malone, Hazard, Jacky, De La swing and Steve Lawler, closing out the festival season the only way they know how, with classic bangers and dirty beats.

The whole week leading up to the festival the weather hadn’t been the best and there were whispers of thunderstorms threatening to make an appearance on festival day. The night before was full of stormy rain and gale force winds, well maybe not quite gale force but to this city girl, it certainly felt that way, thankfully waking up Saturday morning with not a rain cloud in sight bolstered my hopes for a (relatively) water free day. The unique forest event runs for a solid 12 hours, something rarely heard of on the festival circuit, with most having a cut of time between 10/11 due to noise pollution, residential areas and whatever other excuses we have to suffer! So with that in mind, I set out early to get in the maximum rave offering.

Only a short distance travelled from my hotel to get my music taste buds following. I joined the crowds, already in high spirits, struggling to stay vertical on the slip and slide mud tracks created by the heavens the night prior. Forbidden Forest then…An intimate gathering for the musically like-minded, with this in mind the event planners had mapped everything marvellously, each stage was within a short walking distance of each other and positioned in such a way that no clash or saturation of sound could be heard from the respective places, maintaining the intimacy throughout, which is too often lost in festivals, in addition, the organisers, foreseeing the muddy day ahead had laid out straw so there were no health and safety mishaps.

Making my way inside to find what lay in wait, I can already hear the sound of hard drum and bass pumping out from beyond the tree line, it is very early in the day and the park is rapidly filling with revellers. Following suit with many festivals and events alike, Forbidden Forest has opted for a token drink system, not my favourite, as you always run the risk of overbuying tokens and not getting your money back, not so much an issue here but the drinks were priced as one would expect at a festival, well, it was for me, but I would imagine that the northern crowd were somewhat taken aback at a drink price in line with London Clubs. 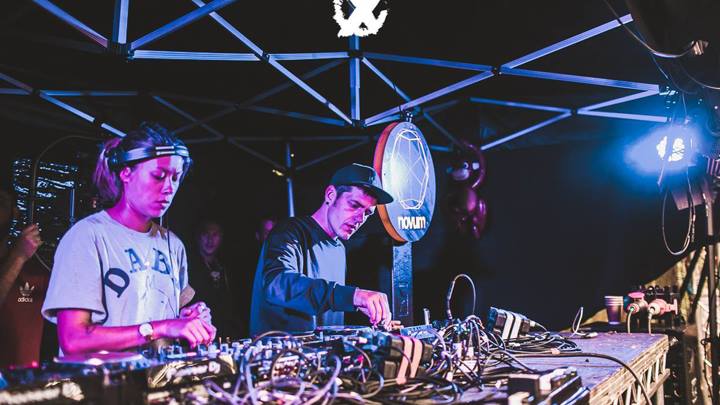 The festival hosts four stages but it’s the Novum stage that’s calling me, Del-30 are in the middle of their set, the sun is shining and everyone in good spirits. I’ve noticed the vibe and crowd at these Northern parties are happier, this is a coming together of friends and associates, no bad vibes, no snobby behaviour, no stuck up attitudes and everyone is up for a chat, being a Londoner I’m used to minimal eye contact and looking at someone with cautious eyes and bewilderment at the mere prospect of being asked  “are you having a good time” and I will tell you something, this atmosphere improves the experience tenfold! Unity for the love of music!

Del-30 really get the crowd going, rolling tech house continuously flowing from the speakers, the small clearing in the woods filling with bodies and before long it is time for Monki to grace the decks, in light of Bestival running concurrently with Forbidden Forest, organisers have still managed to pull in an impressive array of diversity in all of its iterations, on this occasion in the form of Monki, who sets a storming precedent in the woods. A crowd favourite it seems, as soon as she steps into the impressively designed booth the northern crowd chant her name and rightly so, the BBC Radio 1 DJ, well known for championing the sound of the underground is masterful to watch. The crowd are already hyped she takes us through to late afternoon, thankfully the rain has held off, the atmosphere within the forest is electric. Monki finishes up her pace setting set and paves the way for Jacky B2B De La Swing.

A match made in DJ heaven is how I would describe this back to back. With Elrow resident De La Swing and loveable quirky maestro Jacky bringing their rolling tech beats flecked with everything from disco through to crowd favourites such as Music Sounds Better With You, keeping in line with the overall feel of this day festival, maintaining the appeal to a wider audience, what more could a music lover ask for. Changing the atmosphere ever so slightly as we move into the September evening, shifting more towards the bouncing tech house, the mainstay sound of Elrow. 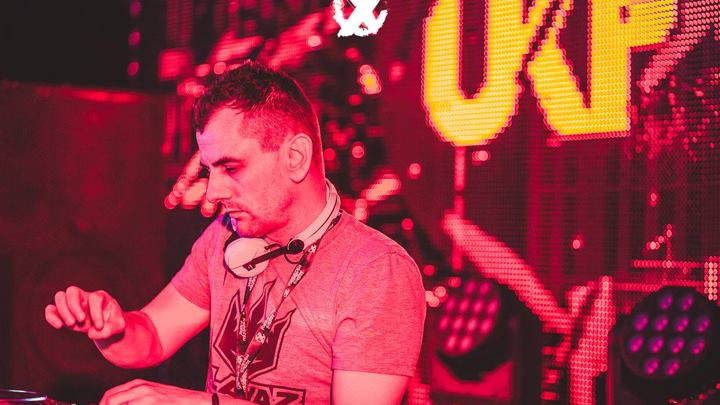 Time to check out the other stages, the Kooky stage had grime MC favourite Bugzy Malone getting the people of Donnington Park hyped up, with the crowd at the UKF stage enjoying longstanding Hospitality records family member Logistics, proving again that Drum ‘n’ Bass is here to make the distance with electronic music. Both stages full with drunken happy festival revellers.

One of the great things I loved about Forbidden Forest is there no over the top aesthetics, there are some decorative features, maybe a hanging heart here or some strategically placed sheets in trees there, but the decor is mostly on or around the stages, the designers instead opting to use the natural forest as decoration.

The sun is beginning to set, making this already picturesque day even more beautiful. Abode resident GW Harrison does what he does best, taking the Novum house on a journey, pardon the pun. Pirate Copy and Darius Syrossian keep the vibe going, the Do Not Sleep boss throwing some nostalgia into the crowd with Underworld’s Born Slippy, although I don’t think most of the festival goers were over 25 they loved it nonetheless.

Viva Warriors head honcho Steve Lawler takes over as the stars begin to peek through the clouds, the light show in the woods only making the atmosphere more out of this world, lasers firing off amongst the trees, whole parts of the forest illuminated in a variety of lights, truly magical. Steve shows us why he has had a packed out year playing around the world, one of my favorite DJs, his sets are rarely a replication of the last he played and his music library goes vast and deep, of all the DJs on the lineup this is one I would recommend going out of your way to see, Lawlers connection to the crowd is second to none. An hour and a half is not enough for me but his time, unfortunately, is approaching its end. 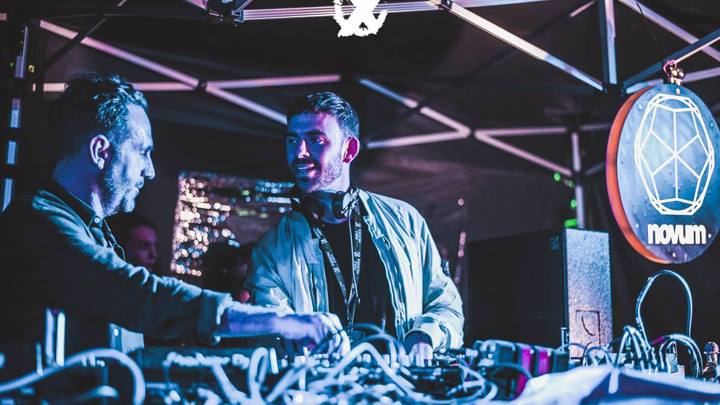 Closing this ultimate forest rave is none other than Patrick Topping, having already done his Bestival set earlier in the day he was on a roll with his fezzy appearances. A favourite within the circuit, having fulfilled numerous dates in Ibiza there was no chance of disappointing the northern crowd, Patrick Topping continues to impress across the tech house scene and for a DJ who is relatively young compared to counterparts of similar stature I for one can’t wait to see how far this young star will go.

Let us summarise then, a few words come to mind, magical, mystical, wondrous, beautiful, friendly, electric, eclectic, seriously I could go on with this list! A fantastic day had by all who attended, definitely a festival I’ll be returning to in 2018, this place doesn’t have the expensive productions we see at We Are or Secret Garden Party, it doesn’t have the budget of Junction 2 or Mint Festival, but it doesn’t presume to be anything it isn’t and the artists and crowds are of one vibe, and it’s a good one believe me, promoters for festivals and raves alike could learn something from Forbidden Forest, bigger isn’t always better, money doesn’t make a great a party, if you have good artists who love what they do and a little logical effort in planning and design and a sound system with engineers who know how to deliver quality and not just volume you have a recipe for something great. 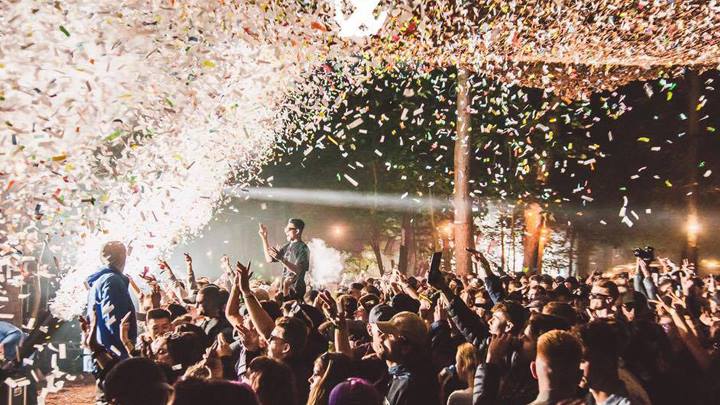 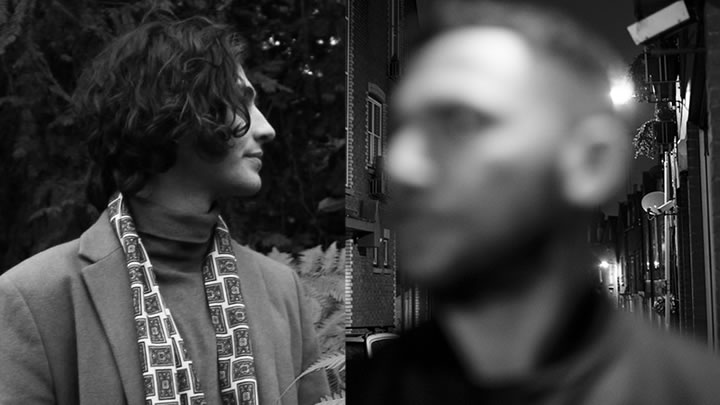