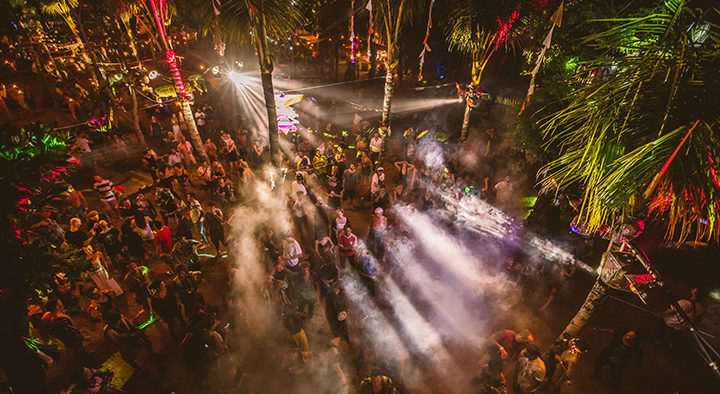 This year Air Festival left it’s home on Gili Air for a new beginning at La Brisa, Bali. Having had a few days to reflect, I can quite confidently say that this was the most impressive selection of world music and tribal, downtempo house that I have ever come across. There were acoustic numbers using a range of traditional instruments, straight DJ sets and groups that merged the two – with selectors adding basslines and hooks to give power and weight to the lighter more delicate instrumental sounds.

This sub-genre has been gaining weight and momentum on both sides of the globe with artists like Nicola Cruz in South America and Oceanvs Orientalis in Turkey. Whilst there are many DJs pushing this style, this was the largest gathering of live, traditional musicians I have seen involved in the process and the effect was mesmerising.

First and foremost let’s talk about the new venue. If the lost boys of Peter Pan grew up, made a few million and built a house, this might be what it would look like. The vast den is made up of tree house structures built around exquisite emerald green pools. The space is entirely built from reclaimed ship wood, giving it a delightful warm rustic feel and everywhere you look there was either a dance floor or a cushioned chill spot waiting to lure you in. Even the toilets had brass sinks and a porter that greeted every punter, spraying and cleaning the place of its sins… no portaloo dread here! 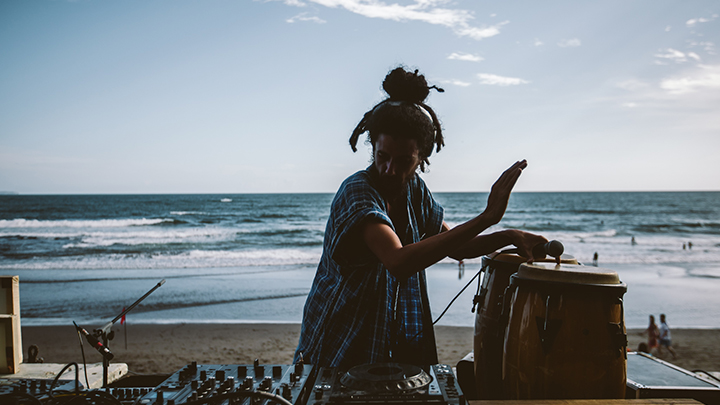 The crowd were, for the most part, a rather yogi, spiritual bunch that had clearly been living out in this beautiful part of the world for some time. Everyone came to party, but the focus was definitely on the music and the creation of an atmosphere over an endless chase for intoxication.

The fine line between yoga and death, however, was one that I tread along all weekend. More than once I would find a character contorted in the most bizarre position, bent double over a table or around a tree with their eyes closed… the first one had me worried and I moved closer to check for breath. The next second this seemingly immobile corpse would lift themselves from their slumber, move into the most amazing stretch and carry on as normal! This took some getting used to, but by the end of the festival, my only concern was for my own limited flexibility.

The AWAN stage was the spiritual heart of the festival. With the oceans rolling waves crashing onto the beach and the moonlight shining over the dance floor, this space became a hauntingly appropriate backdrop for what was to come.

Perhaps the most appropriate explanation of the AWAN stage comes from the local Ubud crowd’s self-prescribed title ‘Medicine Music’. I had seen this phrase on some of the artist’s SoundCloud pages, but it was not until the arrival of Herbert Quinteros that it was fully explained to me. Herbert, a very famous shaman of ayahuasca, came to play at the festival as a musician. Having seen the other artist’s reactions to his presence, however, I understood that Hubert represented much more – he was a blessing to the music that these spiritual people had created. 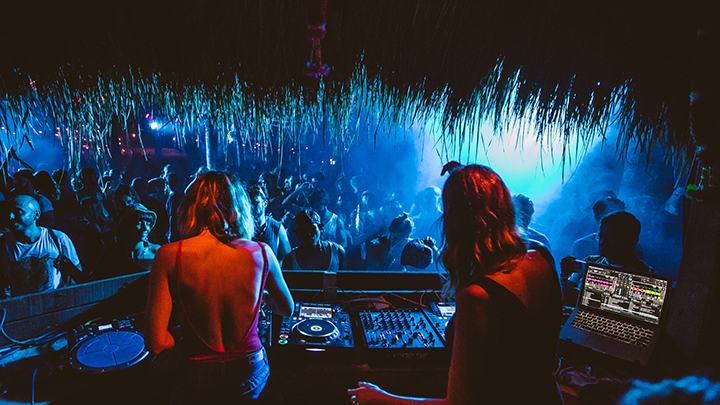 Over the course of the next 3 days, Herbert played his Quena and his Charango with several of the acts. Some thanked him vocally for giving approval to their adaption of shamanic music, but others just seemed calmed and anchored by his presence and participation. I mention this simply because it is in understanding the appearance of this man that I understood that this gathering was not just musical but firmly grounded in the spiritual.

Dancing in the Indonesian sunshine was a pleasure, but my festival highlight surprisingly came when the rains forced some re-scheduling and brought together a super-group of sorts. Raio, Temple Step, Walker, Quinteros and many others joined together as ‘Pacha Mantra’. The group were absolutely incredible – lacing together punchy basslines, picked Latin guitar riffs, Quintero’s flute, shakers and anything else to hand.

Brian Hartman, the man charged with watching over the AWAN for the weekend also had rain to deal with. In the end, he trooped on and played his entire set dipping under a big tarp to mix. Nothing was going to stop this man sharing his vast selections with us. Those that have been to a free party or two in their time are all too familiar with this sight but it’s not quite what a DJ expects for his beachside set in Bali… massive respect for commitment to the cause! 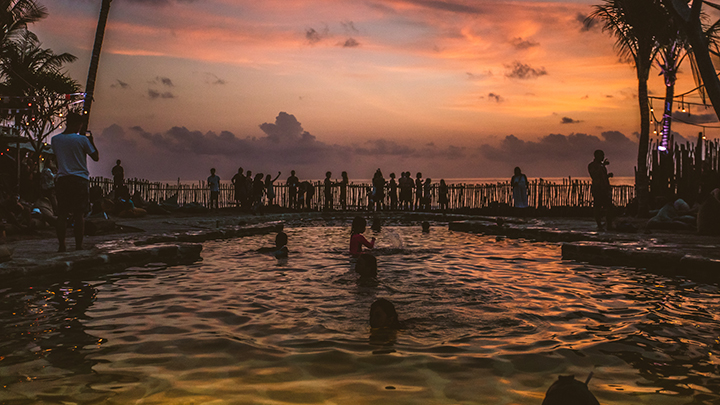 For the most part, the weather held up, but the adaption, collaboration and commitment of everyone involved when it did lamp it down really showed the spirit of the festival and certainly kept us on our toes. Supa Kalulu appeared out of nowhere at one point and got everyone grooving under a huge awning as the stage was moved act by act in reaction to the turbulent weather. The vibe was electric, but it was almost as entertaining watching peoples jaws drop as they squeezed in to see just how many marimbas the space could hold!

Mo Kolours represented the hip hop side of the festivals spectrum. The style was obviously influenced by a love of tribal sound and the deep vocal relaxed smoothness of Detroit. The set itself was quite open and raw. Unmixed and instrumental, each track was introduced by the artist in an almost dub sound system style. In many ways, Mo reminded me of Al Dobson Jr of the now prolific Rhythm Section in his production style and the tempo switch was welcomed.

Raio, who seemed to be involved in many of the acts on some level, showed off his mixing skills with what I can only describe as an instrumental forest dancehall set. The themes of the stage and the man’s taste were evident but he took the opportunity to up the ante on the dance floor and the people responded. 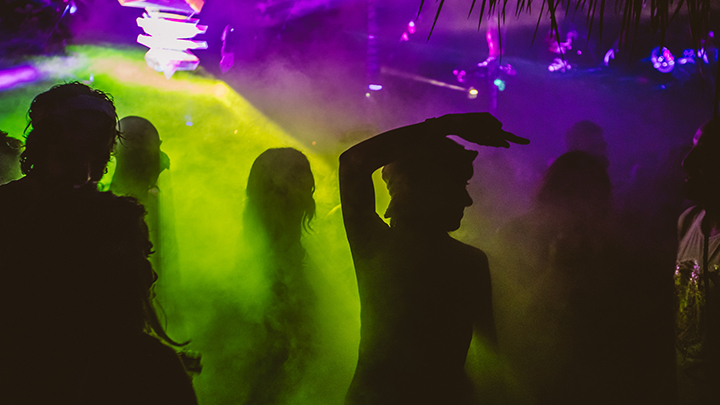 Moontide switched the sample base from the indigenous, the drum circles and the forest to a jazz-laced story that held me from start to finish. I’ve been glued to his SoundCloud since the festival, after a dig for his closing tune, a killer refix of On & On by the one and only Badu.

However, this was a two-stage festival and despite my devotion to the AWAN, the Air stage was nothing short of brilliant in its own right. This stage was the all-out party of the two, with names like Blond:ish, Makam and Fred P taking the helm. The space was vast but so was the sound, with a monstrous, thumping, well-monitored Funktion-One system overseeing affairs.

My highlights from the Air Stage would have to be Tiago Oudman, who held the dance floor to account with rolling progressive beats, expertly linked with uplifting vocal samples. Dave Dinger unapologetically started things deep and dirty despite his 7pm set-time, everyone around very much enjoying his proggy deep take on things. Finally, Rampa deserves a mention, he led the dance with euphoric tribal beats and ruthlessly clinical mixing. The whole dance floor was absolutely bouncing with ear to ear grins, as the sand was ground to a delightful mush between very happy feet.

Had this been another festival I would probably have spent my entire night at the Air stage quite contentedly. The system was incredible, the balance of sound through funky, dirty and nose scrunching was excellent and the crowd absolutely loved it.

The AWAN stage, however, held me firmly and I do not for one second apologise for it. The celebration was introduced ceremonially and remained in that special space between party and sacrament all weekend. Everyone I spoke to could not quite believe what was happening. 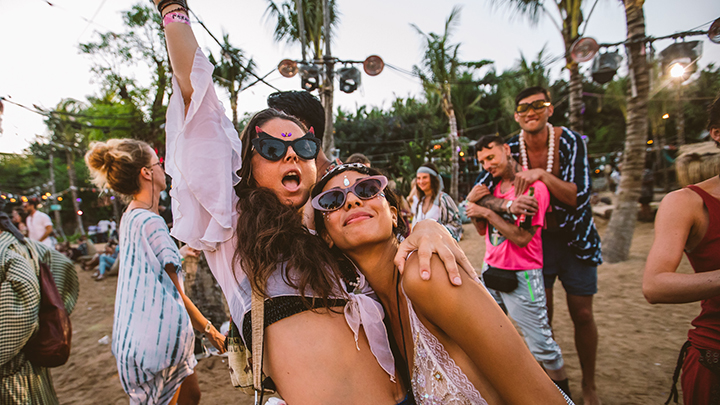 Martha Van Straaten earned her stripes at the final hour and I wished it could go on forever. The stage manager must have felt the same way as he gleefully let her play on and on for hours over her set time… But all good things must come to an end and eventually the sun rose, the first surfers stumbled onto the beach and the party people dispersed.

Being a small event I was lucky enough to get to thank Walker and Brian in person for all they have done in bringing it together. To everyone and anyone else involved, thank you for the experience. I’ll be seeing you next year.

Tags:
Previous Article
Redlight releases ‘Ride That Thing’
Next Article
Davide Squillace walks us thru ‘Once Upon A Time In Napoli’