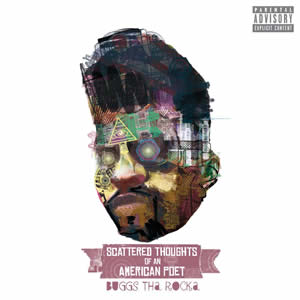 From Cincinnati Ohio, Buggs Tha Rocka has been brewing up a storm in his hometown since releasing his debut mixtape ‘Hip Hop Supa Hero’ back in 2009. Having caught the attention of acclaimed local artists Donte (MOOD) and Hi Tek (Reflection Eternal) he soon established a reputation as one of Ohio’s most talented emerging artists, culminating in his title as “Hip Hop Artist of 2014” at the Cincinnati Entertainment Awards. Legendary hip hop figure Talib Kweli is one of many to have endorsed the rapper’s lyricism, featuring Buggs on his Prisoner Of Conscious Tour in 2013 and once again sharing the stage at this year’s A3C Festival in Atlanta.This month, Buggs is set to release his latest project ‘Scattered Thoughts of an American Poet’, a pre-cursor for a series of releases due in 2015. Buggs’s scattered thoughts are like pieces of an unfinished puzzle, narrated in an effort to try and make sense of it all. The album is an unpredictable montage of his experiences, delivering conscious assessments of aspirations and morality while mixed with lighter sedgeways to produce a more complete experience for the listener.The “Scattered Thoughts Intro” sets the tone for what’s to follow, as Buggs demonstrates his lyrical versatility backed by a serene Sal Dali instrumental. This leads into “My$tery” in which Buggs lays down more tangent wordplay, reinforcing his competitive capabilities as an up-and-coming artist about to take centre stage on the hip hop scene. “Against Me” depicts Buggs’ determination to overcome the curveballs in life thanks in the main to a resolute inner motivation to succeed, and the inclusion of Aida Chakra’s beautifully harmonic verse to finish adds an extra touch of class.MOOD and Phoenix Aphrodite make guest features in “Until The End”, with Buggs re-emphasizing his ambitious determination to succeed as a counterpoint to the alternative of “pushing crack, trying to justify my actions”. Mood follows with a relentless verse, a raucous declaration to stand his ground when confronted by antagonisms, before Phoenix Aphrodite finishes with another hard hitting message of dominance but incorporating a gentler flow than her predecessor. “Angel Of Death” utilizes a catchy piano riff and deep bass hook, courtesy of producer Hop Trax, to compliment the rhythmic nature of Buggs’ flow, before Piakhan brings a different dynamic in another engaging verse.Donte from MOOD makes his first appearance on “Religiously”, again with Hop Trax providing a backdrop of classic hip hop production. The rugged drum loop and wicked cuts are addictive, a real “head nodder” over which Buggs spits a clinical verse savaging the world’s apparent decline while still reflecting on the positivity around him for which he offers gratitude. Donte is engrossing, providing interesting perspectives of his own. His feature with Ianigma in “Thirsty” is filled with tongue-in-cheek misogyny over a laid back groove. “OuterXSpaceXLove” then switches moods once more. Here Buggs presents a tribute to women with a thoughtful approach, enhanced by the melodic chorus vocals of Pappadon and a reflective R&B tinged instrumental from Swiff D. ‘Scattered Thoughts…’ draws to a close with “Time Machine (Shine)”. The excellent Aida Chakra features again, the track benefiting greatly from a hybrid of her soulful vocals and rhymes, showcasing slick flows and melodic harmonies which add an unusual but welcome twist, in keeping with the essence of the album itself.‘Scattered Thoughts of an American Poet’ has a dynamism which encapsulates and reflects the emotions which Buggs has encountered throughout his journey of making the album. The insights and feel-good vibes are designed to focus primarily on the positive aspects of life and overcoming adversity. To this end it is aided by the diversity of talented producers and lyricists, all of whom are in sync with Buggs’ poetic thoughts, a collection of minds in step with one another. These early insights into his dexterity as an artist suggest that Buggs’ reputation will continue to grow in the future, and quite possibly to a mass audience given his multi dimensional musical approach. He will certainly be hard to ignore on the evidence of this release which will be, it must be said, very generously available as a free download on 10th December.