6 Of The Best: Rockwell Talks Us Through Obsolete Medium

2015 was a big year for Tom Rockwell. Not only did the Londoner release his debut album Obsolete Medium through Friction‘s drum & bass powerhouse Shogun Audio, but through the LP, he managed to finally find the perfect balance between his club-friendly side and the cutting-edge production that first made his name.

Naturally with the New Year comes a whole new set of challenges (and hopefully a bunch of fresh music too), and we can’t think of many better ways for Rockwell to stamp his arrival in 2016 than with an Essential Mix. The BBC Radio 1 series has established itself as veritable gold mine of new music – with mixes regularly being referred back to for the months afterwards – whilst giving some of the most forward-thinking underground artists in dance a very public platform to showcase their talents and their scenes.

Whilst the name Obsolete Medium may be Rockwell’s way of having a poke at the album concept, the project is in fact as essential as his Radio 1 mix – in terms of both his own career, and encapsulating a moment in dance history when things got more than a little crazy.  So to accompany the mix, which is still available to stream here for a limited time, we asked him to take a look back at the LP and pick six tracks that define the album and reveal what makes this Shogun Warrior tick.

A lot of the music I listen to outside of producing and DJing tends to be quite rough around the edges as it makes quite a nice contrast to the overly-pristine and overly-produced sounds in modern dance music, and it can be quite soothing to listen to something that is not overly concerned with mixdowns. One of the main influences for ‘Dizzle’ was the lightening-fast arpeggiated riffing used by many 1980’s thrash metal such as Slayer, Stormtroopers of Death, etc, but using a distorted synth lead instead of a distorted guitar. I combined this with synth chords and very large but spacious live sounding drums, to almost re-imagine what a metal band would sound like with neon synths instead of guitars.

People seem to post on my Facebook or Tweet me a lot asking for clicky tunes like I made in 2009, as they seem to be under the impression that I don’t make stuff like this any more and that I’ve moved on. What people don’t realise is that just because they aren’t getting to hear them, doesn’t mean that I’m not making them. I do think however that drum and bass has evolved massively from the time when the minimal style was popping off, and I don’t think those type of tunes have the same type of impact when released today as it has almost become another cliché of drum and bass – like 200hz snares and filtered Reece basses. I think if I released ‘Aria’ or ‘Underpass’ they would almost certainly not have the same impact as they did back then, as the minimal style has been rinsed to death by everyone who jumped on it. This was probably my favourite minimal tune I was sat on, a million snares and polyrhythmic phrasing makes it a bugger to double drop with ‘The Nine’, but there’s more to drum and bass than that, right?

I made the ‘lead single’ off the LP a seven minute tune with a three minute intro, which was either incredibly brave or incredibly stupid, but me and the guys were into it so we thought why not? It was discussed whether we should chop it down to make it a bit more easily digestible at three minutes and give it to a radio plugger etc etc, but I wanted to keep it in its full arrangement as I couldn’t imagine what I would take out and loved the way it progressed. It transpired that people didn’t really care that it was too long with a crazy un-mixable intro and seemed to be into it anyway, so I think we made the right decision. Ironically it ended up having a massive amount of support at radio in its original form anyway, which was amazing.

Sam sent me a really, really early version of this track asking me if I was in to it, and of course I really, really was. I love that high gliding square lead at the end of each phrase and the bassline switches which are very reminiscent of so many inspiring early grime instrumentals, so I got the samples off him and, as I do when doing my solo tunes, took it to pieces and rebuilt it again from the ground up. I was concerned for a while as I finished it without playing it to either Sam or Hyro and was concerned it may be a bit too pace-y for them, but they were bang into it which was a relief! I think it’s maybe a good thing if you’re unsure if people will be into things you write as it shows you’re not playing it safe, and I know from their solo stuff that these guys are definitely on the same page!

Flo is my OG German Neurofunk innovator besty and was one of the people that I definitely had to have on the LP as we had worked together so well on previous tunes ‘No!’ and ‘Rat Race’. I went over to see him in January of 2015 and we did two tunes – ‘Yes!’ and ‘Rave Cult’ – one for his Phace and Friends EP and one for my LP. For both tunes I wanted to get something in the bag that was gritty, techy, simple, but not overblown with wanky sound design like some FM8 demo CD. I was a massive fan of Phace’s LP ‘Psycho’ and the amazing period of Neurofunk that came out on Subtitles so wanted something that harked back to that era but didn’t sound dated.

This was actually a bit of an experiment where I took really small slices out of one of my favourite tunes by a non-drum and bass producer and spent a day manipulating them, messing around with them and then resampling to make completely new sounds – synth stabs, pads, vocal sounds, basses, the whole nine yards. It was something I hadn’t really done before, but I found it really inspiring as a creative way to start a tune. As the tune grew out of these manipulated samples it took the form of an almost traditional liquid funk tune, but, as someone said to me on Twitter, almost re-imagined for the future. I’ve never really been one to concern myself with nostalgic appropriation in the tracks that I write (to be honest, I wasn’t there), so for someone to say that, I found it very complimentary. If anyone can guess the tune I was sampling you can come hang out in my studio for a day – but it will be nigh on impossible I think! 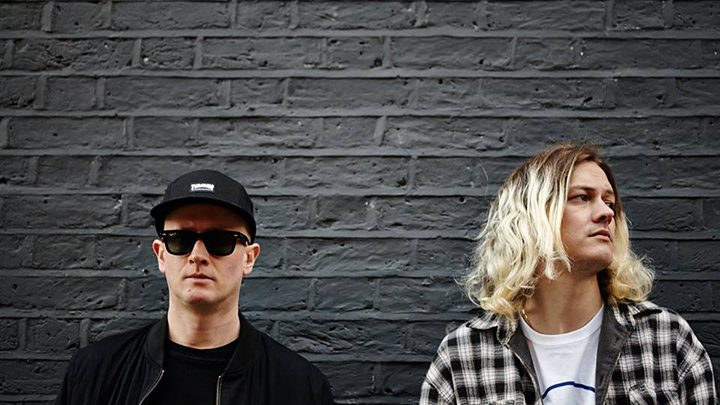