French electronic producer Molécule shares latest single and video for ‘ARIA’ set for release on 26th January via Because Music.

Upon returning after a five-week journey across the North Atlantic Ocean, Roman Delahaye, aka Molécule has produced an entrancing concept album, titled “-22.7°C”, set for release on 16th February, after embarking on a life-changing, perception-altering expedition to capture the frigid flow of the Arctic Circle.

Head of independent Parisian label Mille Feuilles and worked with prominent labels in the past such as Sounds Around, Aktarus, Underdog Records and Play It Again Sam, respectively, Molécule’s music could be best comparable to electronic and experimental techno artists such as the swelling atmospheres of Kevin Gorman, the sawtooth pulsing of German producer Helena Hauff and the investigative experiments conducted by Silent Harbour, thrown into a cohesive blender to form Delahaye’s deeply constructed signature tone. 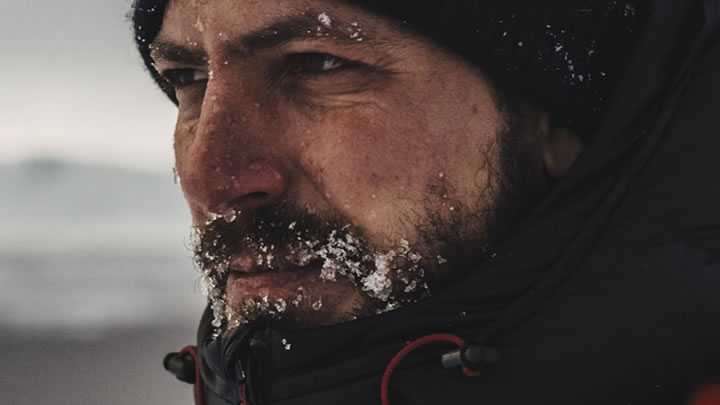 Molécule’s ‘ARIA’ is a creeping, howling, sinister affair with a pulsating thump amidst deranged melodies and deep bass tones, you can definitely see yourself getting lost in there somewhere at 5am – which we are all over.

The director, Morgan Beringer comments on the video for “ARIA”, “The intention was to create a semi-abstracted version of the documentary, hopefully conveying both an element of loose narrative of the experience in Greenland while also using effects and abstraction to push the imagination to explore how those experiences influence the resulting musical production. The inherent connection between imagination and reality. The Northern Lights also served as a heavy influence here, their neon green colour that contrasts so much with the otherwise white landscape, inspiring the use of RGB splitting to create equally alien yet natural colours upon the white landscape…”