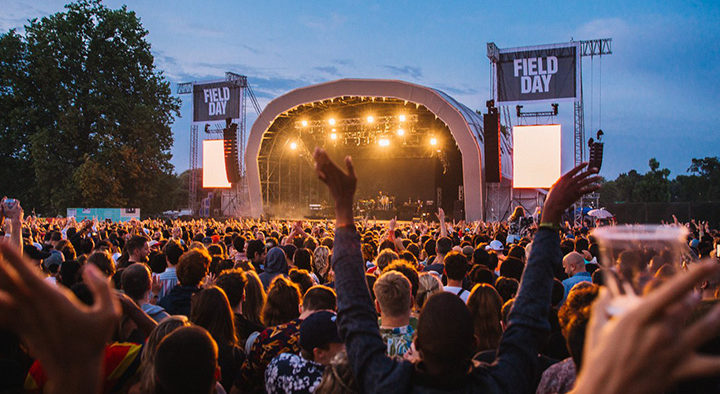 This year Field Day packed up and headed for a new beginning at Brockwell Park. Having been pushed out of Victoria Park, this was our first chance to see how the event would shape up in its new home.

The line up was seriously impressive and essentially split down the middle, with a softer funk, soul, jazz and hip hop feel on Friday and a more party focussed Saturday.

The Friday was a resounding success. Whoever was involved in the bookings deserves a pat on the back! In terms of a game plan – how do you deal with inner city noise limitations? Keep things laid back and funky with plenty of instrumental action. Wherever you decided to potter around there was some seriously good music lurking. 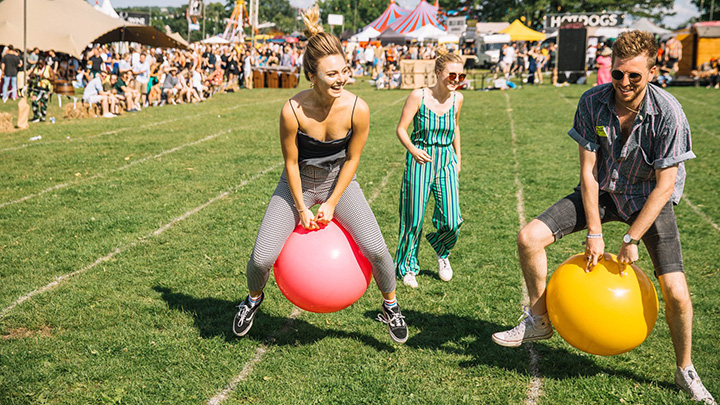 Children of Zeus and IAMDDB represented Manchester with some hip hop and neo-soul. This scene has a bad habit of collecting some rather self-indulgent and overly confident characters and it was a pleasure to see them play in the capital with a bit of humility and northern charm between the drum kicks.

Mammal Hands were absolutely mesmerising, as the 3 musicians managed to build a musical atmosphere that could easily have come from a full orchestra. Progressive, melodic and actually rather beautiful – the band worked together to build an engaging and colourful musical tapestry that took us from a slow and peaceful afternoon, through raucous crescendo and back again. Cinematic Orchestra has obviously been a huge inspiration to the three talented and well-trained individuals – I will be following them very closely this summer. 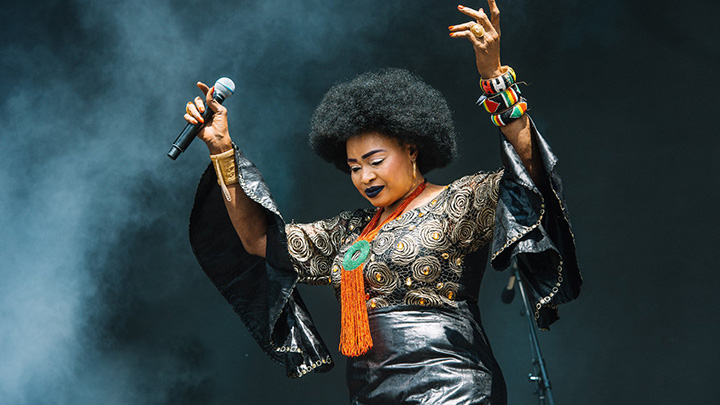 Nao was another booking that drew crowds and produced some serious grins and shapes from the large, varied fan base that had come to see her. Although the classic R&B numbers weren’t particularly to my taste, everyone went crazy for it in the afternoon sunshine – infectious to say the least.

Moses Sumney and his band were slick and smooth in all black everything, bumping out afternoon sounds to a sparse but receptive and keen crowd. Pizzicato strings over jazz and funk head nodders were a nice treat, although Sumney did have a habit of scatting in a style that could only be described as sexy whale folk. Bizarre but entertaining nonetheless. 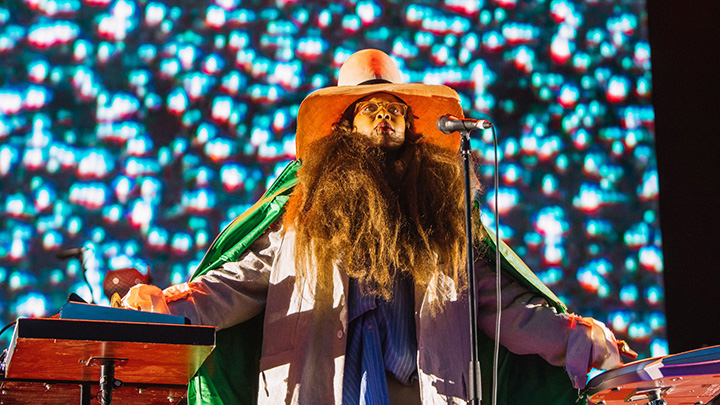 Erykah Badu was obviously the main draw of the weekend. As to be expected she was late, stylish as hell and had a lot to say. It was pretty obvious that many of us had been waiting years to see this woman and despite the wait, pure joy ran through the audience as she stepped out in her oversized garms. ‘On & On’ and ‘Next Lifetime’ really hit the spot and all in all it was a good performance from that very special lady.

The performance of the day came from Loyle Carner, who as per usual was heart-warmingly genuine, passionate and clinical. Busy on the festival circuit last year, Carner certainly doesn’t waver on the big stage and has grown accustomed to his role as the storytelling family man. Emotional imprint aside, the mans greatest attribute is a clear tone, a clean flow and content that gains acknowledgement without the need for the trained ear of the hip hop fan. There are very few UK hip hop artists that pull off this fine balance, but Carner does it with ease – ‘aint nothing changed’. 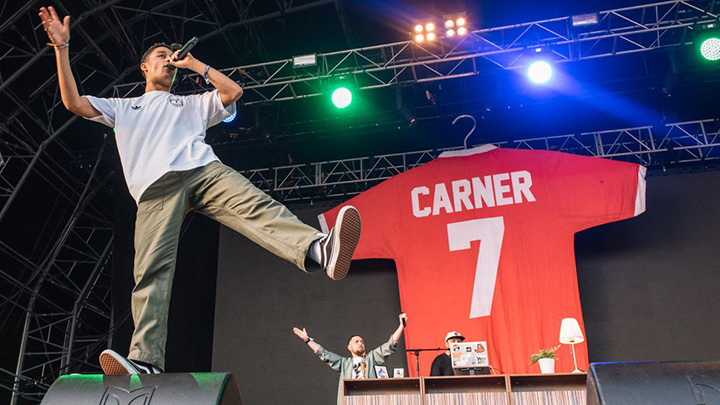 The only issue on Saturday was the continued use of 45 minute sets with 15 minute intervals. 45 minutes is not enough time for the artists or the punters, by the time things are in full flow, the set is over and you probably only caught a couple of tracks after fighting your way there. For an event that has been going for 11 years, you would think they could muster enough management to make changeovers quicker. The result was a lack of flow and atmosphere that could easily have been avoided.

This, however, was a day of two halves and the differences could not have been more dramatic. While we were eased into affairs on Friday, Saturday launched right into things from the offset.

Moscoman was particularly impressive, laying out progressive deep rolling beats with Arabic influences. Admittedly it felt a bit odd to be dipping out of the relaxing afternoon sun for a dingy tent rave, but that’s the nature of the beast in this case. 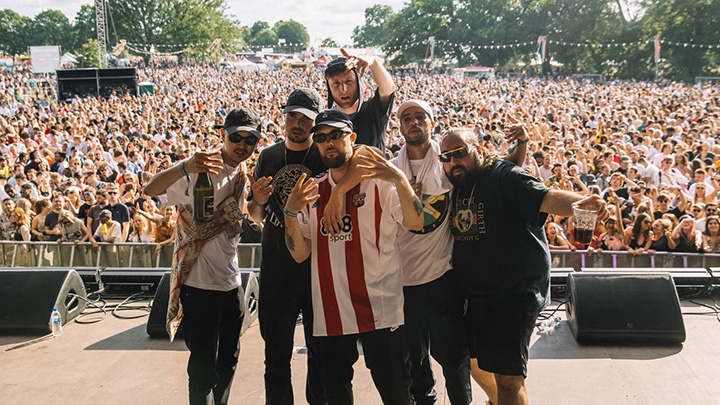 If humble hip hop was the order of the day previous, then Saturday was novelty grime. In all fairness there were two sides to the coin, Kurupt FM were their usual selves and shelled out loads of classic garage, as they had a big old party and were easily the most energetic performance of the weekend. AJ Tracey, however, was self-absorbed and a bit embarrassing. Within about 30 seconds on stage, the man was in the crowd shouting karaoke to his own releases. Out of key and out of context, the recycled beats and flows added little to the story.

This was not the tone of the day though – Thundercat gave a genuine and heartwarming performance. Soulful and highly likeable, the set rang true over the park and everyone walked away with a smile after ‘Tokyo’.

Mount Kimbie were without a shadow of a doubt Saturday’s top performers. A welcome break from the DJ orientated acts taking over most of the big tops – these guys were a serious touch of class. Synthesisers, keys, effects, vocals and drums all came together as one. The group has an usual energy, each member was very visually into the music and their role and almost looked completely absorbed in their own work, without so much as a passing look at the others. Despite that, there wasn’t a dud note between them and the result was a wonderfully layered musical alliance that won the hearts and feet of everyone in sight. 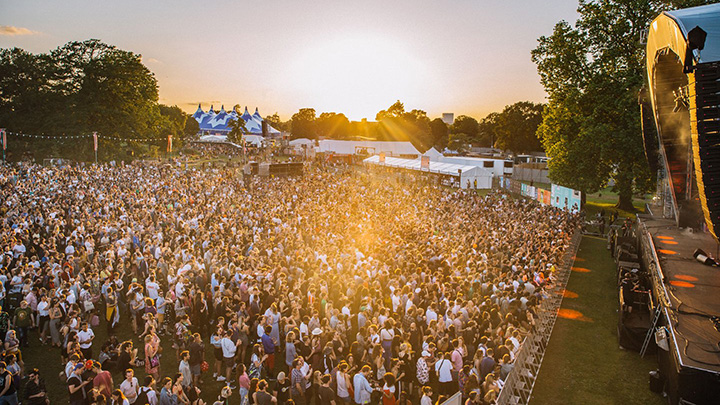 Overall, Field day had a lot to show for its efforts this year. The line up was pretty solid and there were some really exciting performances from many disciplines. However, having been around for over a decade it is a bit disappointing that the entire site is still made of big top tents – an unimaginative approach that lacks creativity and personality and one that is often taken by inner-city festivals. This is slowly being rectified by many of Field Days competitors and is a movement that the festival needs to take note of. The sound limitations genuinely weren’t that imposing which is a delight to say. If this festival were to drop 45 minute set times on the Saturday in favour of a slicker logistical operation and to put some more imagination and effort into the site itself, it has the potential to become a serious contender.