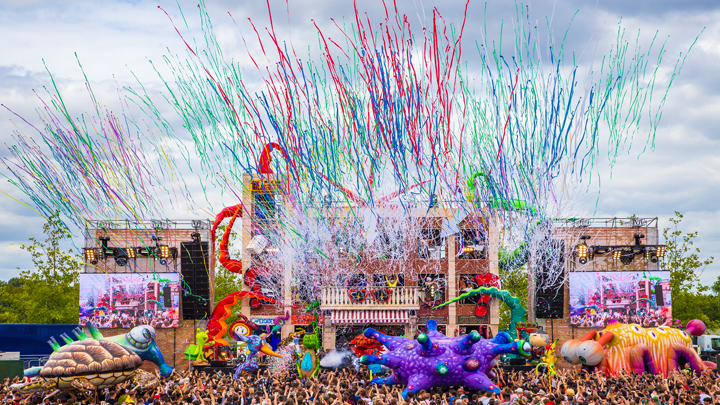 Everybody loves a good party and there’s no one else with a better name for throwing them then Elrow. Saturday 19th August and Sunday 20th August saw London’s biggest party yet as Elrow took over the Olympic Park for 20 hours of tech house loving raving. With its usual speedy ticket sell out expectations were high for the weekend and it’s easy to say that Elrow certainly didn’t disappoint.

Walking through Stratford Westfield with packs of ravers really had spirits at an all time high for the day. As expected the crowd was a mix up of ravers and your typical punters coming just for the name of the festival because you know that ‘Elrow’ Instagram post is what they’re really looking for. Nonetheless, the atmosphere was good and after a short queue, we had found our way through the gates and into the main area by 1pm. Kicking off proceedings for us was the man himself Eats Everything, who really knew how to get the party started, at the Singermorning Stage. The atmosphere was infectious, huge lobster like inflatables and puppets roamed in and out of the ravers as streams of confetti showered down. Definitely the kind of shenanigans worthy enough for that ‘pic for the gram’. The stage was definitely one to catch the eye, a big hotel like building with dancers at every window with the DJ sitting right at the bottom providing the vibes. With tons of unreleased bangers blasting out of the speakers, the party had well and truly begun. 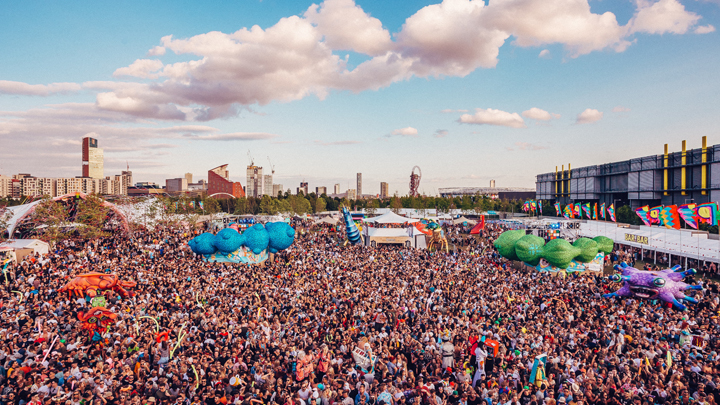 Time goes quickly when you’re having fun and after a short stumble across to the El Rowcio tent, we found ourselves grooving to the beats of Riva Starr. The Snatch Recordings main man was smashing it tune after tune as he blasted out some of his very own new tunes to our ears. One tune that caught my ear was his new hit with Zanillya called ‘Pull Up’. This bouncy crowd pleaser had the crowd popping and is definitely one that deserves a ‘Pull Up’. A truly wicked set leaving us perfectly to take on the last two and a half hours of the festival.
It was time for the set everyone had been waiting for, the closing of the opening day. The man who lives for tech house Mr Jamie Jones was stepping up to the decks for two hours. As expected the Hot Creations heavyweight had infected the place with his energy within seconds, his constant head bopping and seamless mixing had everyone loving life and grooving in true Elrow fashion. JJ was pulling out all the stops to give this party the finale it deserved and he certainly didn’t fail, rolling out tracks from his new Kooky Music EP. One track in particular really had the party popping, ‘Parallel Universe’. One of those tunes that when you hear it you instantly know it’s a JJ classic, the futuristic synth along with the heavy hitting kick drums created an absolute belter for all tech house fans. With banger after banger and confetti after confetti, it was time for the show to end and a big well done to the man himself Jamie Jones for closing up the day in style. 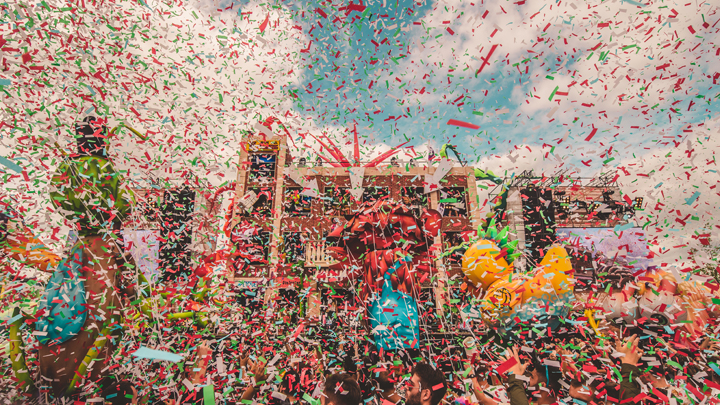 Following on from Saturday’s shenanigans was always going to be a hard feat for the Elrow boys but clearly, the lineup had already pushed the day into the right direction. From quiet suburban areas back into the craziness of the Olympic Park for one last day of partying. After another morning of stumbling through the queue, we had found ourselves once again in front of the Singermorning Stage for two solid hours with the big boys Jamie Jones and Seth Troxler who went back to back. These boys really knew how to keep the party going from Saturday. Kicking things off with some bouncy tech house numbers and popping classics. The crowd spirit was at an all time high, the sun was gleaming down in between the puppets and inflatables and the crowd itself was full of much more ravers rather than your Instagram fanatics. As expected the popular festival classics such as remixes of ‘Gypsy Woman’ had the crowd clapping away in true tech house loving style. Everyone was loving life and the day was off to a great start. As always at a festival, you get lost in the music and before you know it time has gone forward a few hours and we found ourselves indulged in the beats of Santé and Sidney Charles. These two monsters of the scene are two you can rely on to shell out some absolute stompers. Going back to back these two were unrivaled with their effortless mixing in and out of tracks really showing what they were made of. Sidney’s new one ‘U-Town’ from his new Fargo EP had the crowd grooving away as the grey clouds took over from the sunshine. Despite the weather, the festival vibes were still at an all time high and nothing could take away from the performance these two were giving us. Of course, the day has been all about the tech house but there’s nothing wrong with a little switch up and that’s exactly what we decided to do. 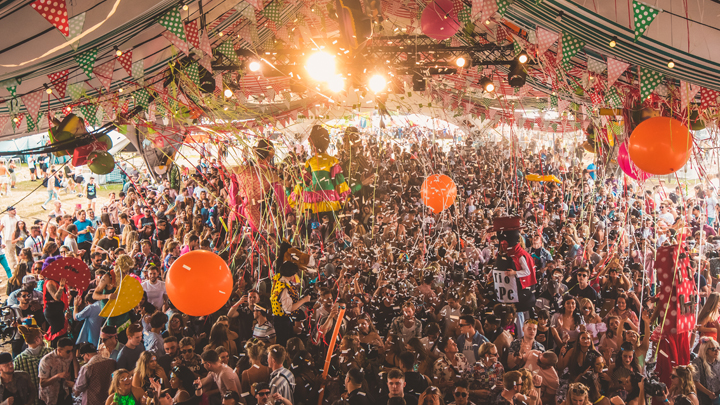 We’re in the middle of a field surrounded by big stages and tents but they weren’t the only things on the agenda. A short walk away from the Singermorning Stage we found a good old fashioned ice cream van but this wasn’t just a normal ice cream van. Mr. Whompy, an ice cream van made for some heavy heavy beats. Cause & Affect took to the decks of the ice cream van to shell down some absolute filth for one hour. The perfect little switch up from tech house to some bassline, playing his classic tracks such as his very own remix of ‘Cut Me Up’ and VIPs of various tracks such Chris Lorenzo’s ‘Comedown’ he had the place rocking. A pure master class in bassline from the Birmingham don.
It was now time for the closing ceremony of the Elrow weekender and the Knee Deep In Sound selector Hot Since 82 had been put up to the task. The weather had taken a turn for the worst but that didn’t change anything, the excitement for this set was ridiculous. The sounds of Hector Couto’s ‘Nasty Is Tasty’ boomed out of the Singermorning Stage as the rain poured down. The heavy thuds and quick hi-hats had the whole crowd dancing in the rain in high spirits. The house head was effortlessly conducting this closing ceremony in style with the whole crowd including himself two stepping away in trance and before we knew it the clock had struck ten, bringing this hard 20 hours of raving to an end. One last rush of the inflatables and shower of confetti as everyone made their way home in the rain. It’s safe to say that for its debut festival, the Elrow boys smashed it and certainly left us wanting more. 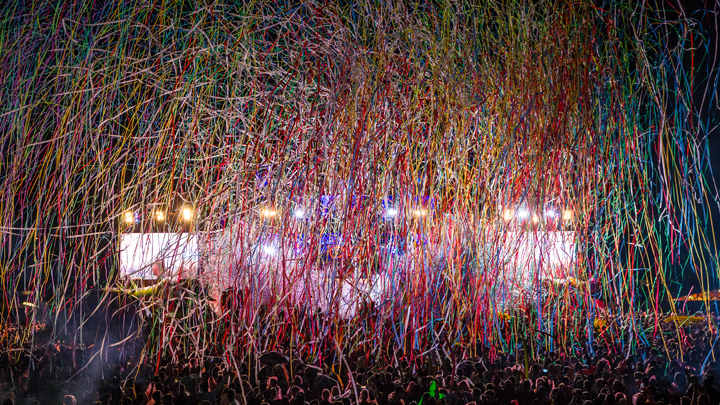 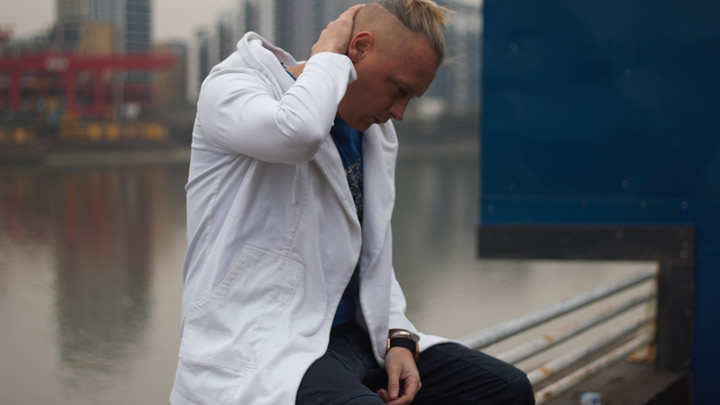