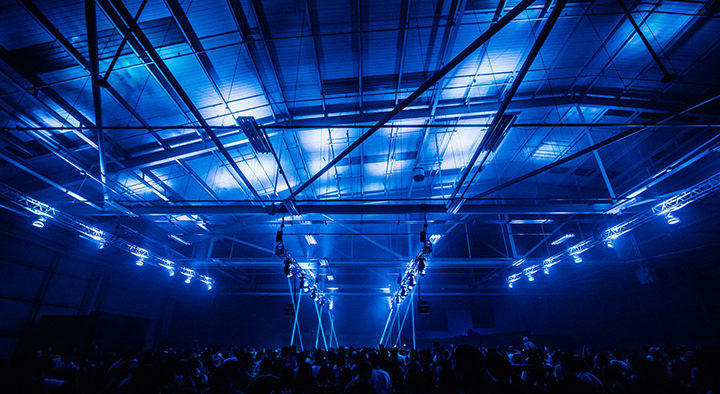 Euphoric, exhilarating and completely overwhelming; AVA Festival once again proves itself to be not just on par with other festivals in the world, but above that. At a time when Northern Ireland is so heavily featured in bad press, being presented as backward, with draconian laws, AVA Festival confirms Belfast is a leading representative of underground electronic dance music. Hosting a wide scope of both local and global talent, AVA puts an emphasis on what Belfast is achieving in dance music. AVA presents itself as a microcosm for worldwide underground electronic dance music, and it’s only going to get bigger. 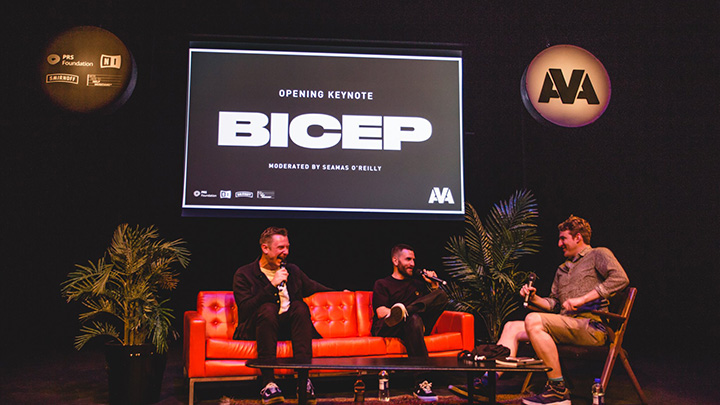 The weekend began with the conferences on Friday morning, opening with a keynote by Bicep. Made up of duo Andy Ferguson and Matt McBriar, both of whom are Belfast nationals, Bicep were the ideal opening speakers for the morning. Introduced by Matt’s sister Sarah McBriar, founder of AVA Festival, it was encouraging to feel like dance music belongs in Belfast. Bicep spoke about the creation of their first album, after releasing a mountain of individual tracks and EPs, which were more club focussed, they wanted to make something that would suit both home listening and the club. When asked about the naming of lead track Glue, the duo explained they could not think of a name until it was about to be released, and they said to their manager “We just need something that is going to stick,” and their manager replied, “What about Glue?”

There were three different rooms of conferences, making the choice of talks to go to difficult, but I decided on attending ‘Creating Longevity in an Evolving Scene,’ with representatives from Twitch, High Hoops, BodyTonic, Loud By Design, and moderated by Timmy Stewart. This conversation focussed on the changing and evolving scene of electronic music, and how difficult it can be for promoters to keep up with changing demands. 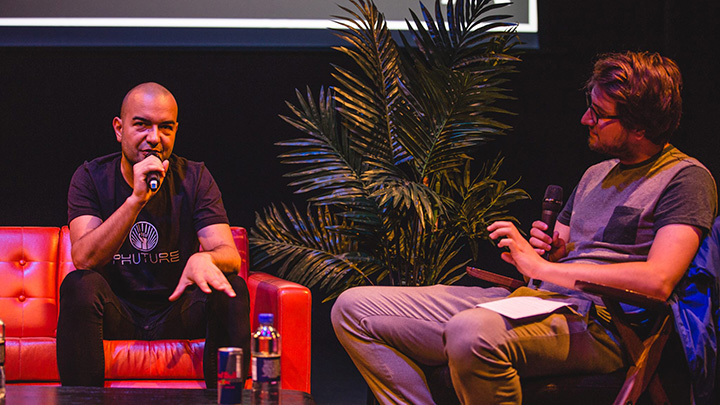 I then attended the chat with KiNK, moderated by Resident Advisor’s Carlos Hawthorne. KiNK is the most humbling DJ you’ll ever meet. Growing up in Sofia, the capital of Bulgaria, KiNK shares his story of growing up in a communist country, to being liberated into democracy in the late 1980s, and being “hungry” for Western Culture. He grew up listening to disco, which developed into a love of house and techno. KiNK began running events in Sofia, before progression into DJing and production. KiNK is a valuable artist to the scene, as his sets are always live, highlighting his ingrained skill and passion for DJing. KiNK also revealed that his AVA set had a surprise planned for the crowd. 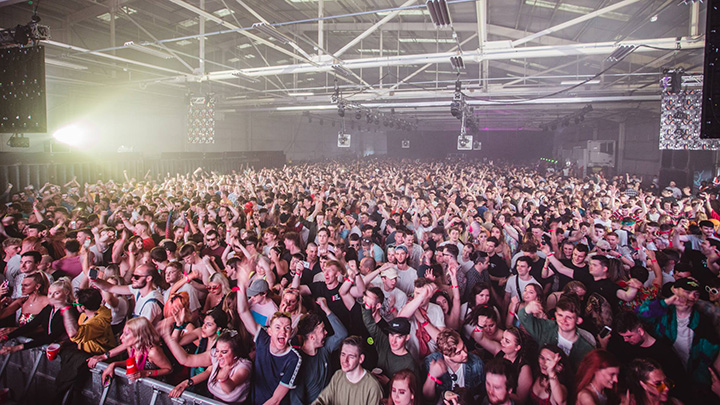 After being held in T13 in the Titanic Quarter of Belfast for the past 3 years, AVA Festival moved home this year to S13. S13 has a capacity of 5000, meaning an extra stage was added, and Boiler Room ran on both days. The venue is an old reformed B&Q Warehouse, meaning the standard components of a B&Q, such as the greenhouse and the loading bay, were put to good use. The Main Stage was in the main B&Q building, consisting of a huge room, with a roof that echoed the pumping base throughout the building. The visuals and lights were a force to be reckoned with; showcasing a powerful and impressive display. The Smirnoff Stage was toward the back of the building, a smaller stage, but still as powerful with lighting and arrangement. Outside in the loading bay was the Red Bull Stage, which consisted of a downwards ramp, with the DJ at the end of the ramp, but the stage was elevated, meaning that you could see the DJ no matter where you were standing. This stage impressed the most, as the mirror installation at the back, behind the DJ set, reflected the lights, creating an awe-inspiring display. Boiler Room was also outside, but in the greenhouse, creating a hot and sweaty crowd. AVA also had a chill space made up of fairy lights and seats for when the dancing gets a bit too much, a cocktail bar and a large outside area, with picnic tables. One of the best things about the venue was the windows on the roof, as when the sun started to set, the main room darkened and the lights and visuals came alive. The venue far exceeded anyone’s expectations. 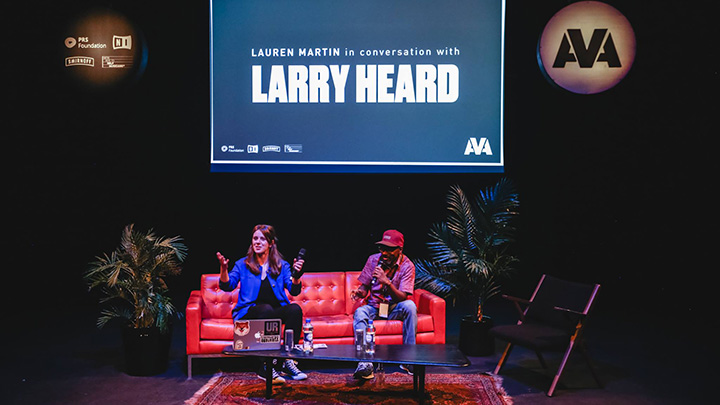 Upon arrival on day one, Northern Irish Holly Lester was absolutely slamming Boiler Room and it was completely jam-packed, but there was too much going on to stop and dance for too long. AVA presents the same paradox in everyone’s mind; with four stages to choose from, all hosting absolutely outstanding talent, it becomes difficult not to miss anything. Heading to the main stage to see Larry Heard aka Mr. Fingers Live, was an out of body experience. Hearing Larry Heard and his ensemble open their debut appearance in Belfast with the iconic “Can You Feel It” was a euphoric moment. The crowd had grown considerably by this point, and the main stage was almost full. Larry Heard was followed by KiNK, who revealed the surprise he had mentioned earlier at the conference was a live samba band accompanying him on stage, bringing both percussion and an electric atmosphere to the crowd.

The lineup for the main stage was too good to miss, as Denis Sulta followed KiNK. Sulta has became a sort of god-like figure to Belfast, after his Boiler Room set at last years AVA Festival put Belfast on the map. After being warmly welcomed to the decks by lots of ‘yeos’ from the crowd, Sulta opened with “Tru Dancing” by O’Flynn, creating an elated beginning, setting the tone of what was to follow for the rest of his set. 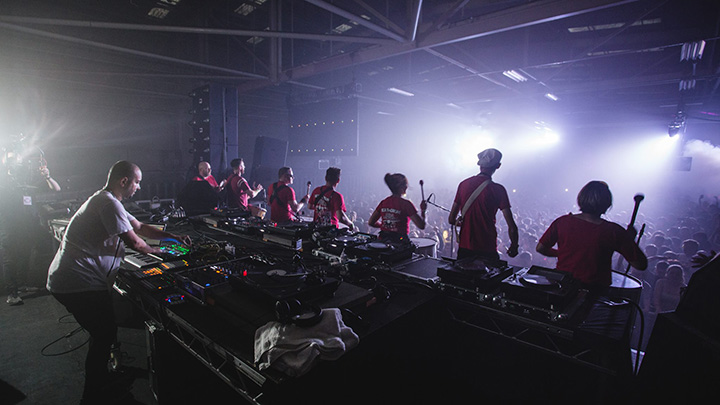 Sulta was followed by Bicep, a duo whose presence in their homeland will never suffice the demand for their sets. Headlining the main stage, Bicep played leading track, ‘Glue’ from their latest self-titled album, and the Four Tet remix of ‘Opal.’ Bicep left the crowd in complete awe, and ready to go for day two.

Arriving at S13 on a sunny day, with the knowledge that you’re in for a second day of phenomenal local and global talent ensued a great exhilaration among everyone, as the atmosphere in the queue was electric. Heading first to Boiler Room to see Belfast local Bobby Analog was inspiring, as seeing Northern Irish people supporting other Northern Irish people in underground music, really created a sense of belonging. Mount Palomar, another Belfast local, thrilled the Red Bull stage with his Live set. Mella Dee took to the main stage late afternoon, followed by Derry native Or:la. After seeing Or:la in an intimate one hundred and fifty person capacity venue called the Menagerie in Belfast; I was looking forward to seeing her set the most. Or:la delivers hard-hitting, heavy sets with a pounding base, perfect for the incredible sound system installed in the main stage, meaning Or:la did not disappoint. Heading to the Red Bull Stage to see the end of Swoose and Cromby, we caught them at the perfect time, as they dropped Afro Medusa, “Pasilda,” a lively and fun piano track which had the whole crowd dancing. Constantly flitting between stages, we headed to Boiler Room to catch Sunil Sharpe’s closing set. Boiler Room was completely packed full, and everyone was dancing. 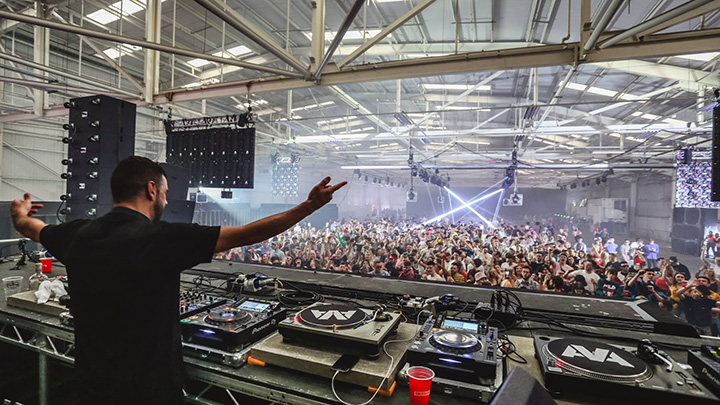 Making our way back to the main stage to catch the end of Mall Grab’s set was ideal, as after seeing his head bobbing behind the decks; it is clear Mall Grab really does play feel good house music, putting the crowd into an ecstatic mood. After catching up with Mall Grab later that evening, he revealed that he played some of his unreleased tracks in his set, and there is a lot to look forward to. Staying at the main stage to witness the iconic opening of Floorplan aka Robert Hood, just as the sun had set: the main room was thrown into darkness, with flashing lights and intense visuals bringing Floorplan onto the stage. Playing his iconic gospel themed “We Magnify His Name,” Floorplan had everyone in a good mood. At this point it was nearly 11pm, and after eight hours of dancing, Hood kept the crowd moving. Hunee closing the Red Bull stage created an ethereal atmosphere, reminding me why I love house music. Hunee has the ability to take you on a musical journey; leading the crowd on a voyage through house, disco, techno, electro and everything inbetween.

After feeling like I had my techno fix for the evening, we headed to the Smirnoff Stage, where Jayda G was throwing out the grooves with some old school disco. An extremely lively DJ, Jayda G makes everyone enjoy themselves, just by looking at her. It’s so refreshing to see a DJ dance behind the decks the way Jayda G does, as she encourages the crowd to have fun. Closing the Smirnoff Stage was Moxie, a favourite of mine. Having had seen Moxie a few years back, I was highly anticipating big things, and she did not disappoint. Her set perfectly ended the fantastic weekend. 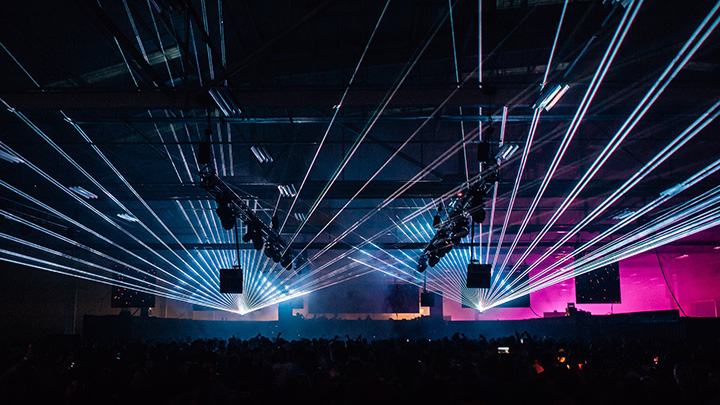 AVA is so much more than just a festival, it is an incredible weekend, which embodies the values of underground electronic dance music. Dance music was born out of inclusivity; it created a place of respite, a safe haven which enables everyone to express themselves, be it through dance, dress or sexuality. AVA embodies the roots of dance music, constructing a physical and mental liberating space in a country which was previously so deeply divided, proving that dance music brings people together, it does not drive them apart.

In Conversation With…Timmy Stewart and JMX 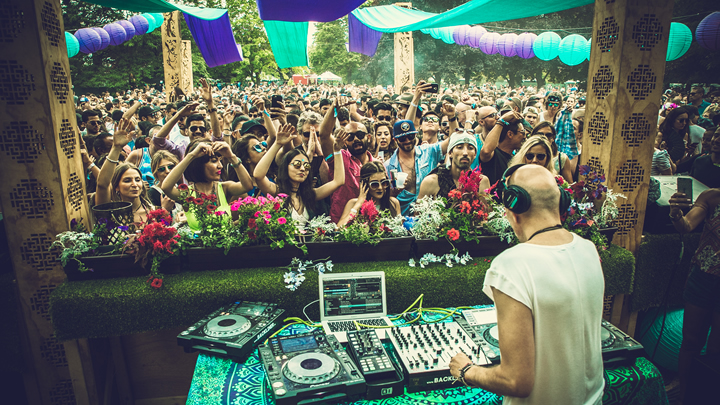