Welcome to the brand new, monthly Survival Tracks. It’s been all quiet for a few months (hopefully you haven’t gone all Bear Grylls on us), but Data Transmission’s round-up is finally back and ready for action. Shifting slightly in format, this feature will collect the top 10 releases of the past month, plus we’ll be roaming the archives for one tried and tested killer. So fear not if you’re struggling to keep up with the latest tunes, we’ve got everything you need right here.

As ever, we begin with a little bit of noteworthy news. Earlier this month, it was announced that Renegade Hardware will be closing down. The label, run by Clayton Hines, has been a staple of the scene for 20 years, offering a progressively tech-centric side to drum & bass. It’s a huge shame to see Hardware disappear, but as the label said via Facebook: “all good things must come to an end.” Thankfully we won’t have to bid our final farewell until February 2016, when Hardware has promised a massive final show.

Whilst I’m talking labels, Samurai Music Group recently shared news of two new labels joining the fold. Altar – a non-Samurai imprint – will offer dark techno (rather appropriate for a label stationed in Berlin); meanwhile Shiro joins Horo and Red Seal as the latest edition to the Samurai family-proper, and is designed to give artists their first vinyl release in limited runs of white labels.

June also saw notable offerings on the LP front, including the long-awaited, artist album debut from DJ Marky: My Heroes. Shogun warriors, Spectrasoul, laid out a long-player too, following-up their 2012 effort, Delay No More, with The Mistress; and June Miller served up a full 15-tracks for RAM on Robots & Romans. You can catch the duo in action on our Live Transmission here. Not an album, but also worthy of a mention, is ‘LVL 09’, the second track from Manchester outfit, Levelz. A mass MC/producer collective (including Dub Phizix, Chimpo, Strategy and Skittles), Levelz cross drum & bass, hip hop and grime. It’s still early days for the group, but they’re already showing a lot of promise, providing an intriguing avenue to a more vocal-driven, structured sound.

Anyway, that’s enough waffling from me, let’s get down to business. In no particular order, here are your June Survival Tracks…

Stray has always been a promising talent, yet often his EPs can be rather hit and miss. Following his incredible Ivy Lab work for Critical, it seems the Londoner is now on a roll with his latest Exit release. Effortlessly cool, title-track ‘Paradise’ continues the hip hop-leaning sound that has become Stray’s signature. Sublime synths, coupled with those trademark pitched-up vocals, form a soft padding around the weighty throb of kick drums. A solid advert for the artist’s most cohesive work to date.

One of the most intriguing cuts on Electrosoul System’s new album, Flawless, ‘8th Dimension’ is – as its name suggests – out of this world. Presumably the result of a hyperactive child being let loose on a sample library, the track oohs, aahs, pings and pongs – in fact, if there’s an onomatopoeic word for it, then ‘8th Dimension’ probably does it. This is no random mash of odds and ends however; the Russian producer has intricately arranged each piece, resulting in an energetic and fantastically jaunty tone.

Fancy a blast from the past? Then Emotif has you covered. The SOUR offshoot has been doing some sly digging and upturned Back To The Jungle, an unreleased Loggi album from way back in 1995. With the LP now finally seeing the light of day, Emotif have also dropped a host of remixes, including this original ’95 version of single ‘Where’s The Love Gone’ by No U-Turn head honcho Nico, under his Deependance alias. As expected, it’s jungle to the core; erratic breaks fly left, right and centre, and the bassline is sufficiently facemelting to require weeks of surgery afterwards. Who ever said nostalgia was a bad thing?

Critical boss, Kasra, and Russian-prodigy-turned-label-mainstay, Enei, certainly pull no punches with this one. Taken from the EP of the same name, ‘Inside The Box’ reps standard juke structures, whilst still sounding distinctly Critical. Typically gruff, tuned-down vocal snippets and snappy snares lead to an abyssal drop, yet the undulating low-end and modem-like whines that follow favour digital sonics, rather than the traditional nod to jungle. Dawn Day Night may have vanished into the depths of his tomb, but in his absence, Kasra and Enei will more than suffice.

Marky doing what Marky does best. Taken from the aforementioned My Heroes LP, ‘Frenesi’ sees the Brazilian in liquid funk mode. The ever-welcome partnership of strings, female vox and lightly-bubbling synths are carefully chopped, adding a start-stop characteristic that reflects Marky’s legendary skill with the turntables. A subtle guitar lick gives the track its rolling groove; expect to spot this one on many a summer playlist (although it’ll serve as a good pick-me-up in the winter months too!)

Just when you thought the ‘water drip’ sample was dead in the… well… water, along come Kolectiv. Making their Plasma Audio debut, the London trio apply drips and other assorted percussion with pinpoint accuracy, forming a curious, syncopated rhythm that always begs another listen. Elements reverberate eerily, as if ricocheting from the invisible walls of a vast subterranean cavern. Don’t be fooled by the understated title, and be sure to check out the flip from Survey too.

Paul Jubei should have made drum & bass in the ’90s. The Brit’s latest offering, the True Form EP, feels like a homage to the golden age, with nods to the tough bass and raw drums of Ed Rush & Optical, and further back still into junglist territory. And best of all, it suits him. Developing notes all too briefly touched upon in his 2013 album To Have & Have Not; True Form lays a stable foundation for a bright future. The EP’s crowing glory, ‘Cold Corner’, is quite simply, a banger. Steo’s deceptively airy vocal creates a false sense of security, doubling the shock once the break hurtles back in, twisting under the obligatory filters and flangers. Jubei has found his calling and revealed his true form.

Beginning a song with reversed notes has a strangely alluring effect. Just like the urge to do that thing you really know you shouldn’t, the intro to ‘If I Smiled’ tugs and niggles at the back of the mind so much, that by the time the track has kicked in, you’re already in love with it. And as if that initial emotional connection wasn’t enough, Dawn Wall then throws in a sugary-sweet vocal with a hint of melancholy – talk about pulling at the heart strings!

Confusing/mildly-disturbing artwork aside, Atic is on top form with his newest release via Free Love Digi. Although a half-step rhythm and sensual chimes make ‘Pyramid’ the most relaxed cut on the Tuff Times EP, the track still packs a punch, with a resonating kick that thuds home like a blaster set to stun. Once the illusion of serenity has been disposed of, the Denver artist reveals an underlying roughness and faint sense of menace that’s gripping to say the least.

When looking for a hefty slab of drum & bass, tapping the older brother of techstep heavyweight and Biotic co-founder Facs, is probably a pretty decent place to start. At least, that’s what UK collective AutomAte appear to believe, and judging by the label’s latest signing from said brother – a.k.a. Fon – they’re bang on the mark. Together with engineer Phormz, Fon expertly balances a raucous breakbeat upon a knife’s edge, utilising space within the mix to seemingly slow down time, and prevent ‘Mistaken Coincidence’ from collapsing into chaos.

Given the label’s announcement this week, it seems only appropriate to dip into the RH back catalogue for our archive track. Released as part of the gargantuan, 30-track Horsementality compilation back in 2011, ‘Seraphim’ finds Loxy & Resound at the height of their collaborative success (the pair released their seminal Burning Shadows LP via Exit the same year), entwining powerful drums and haunting soundscapes. In particular ‘Seraphim’ stands out for the stark contrast between its segments. One moment the track wanders listlessly through a vaguely sinister, yet never truly threatening, world; the next, all hell breaks loose, as a hail of cymbals and snares obliterates the calm. Methodically switching back and forth between these states maintains structure, but the force unleashed by each second phase is both disorientating and entrancing. 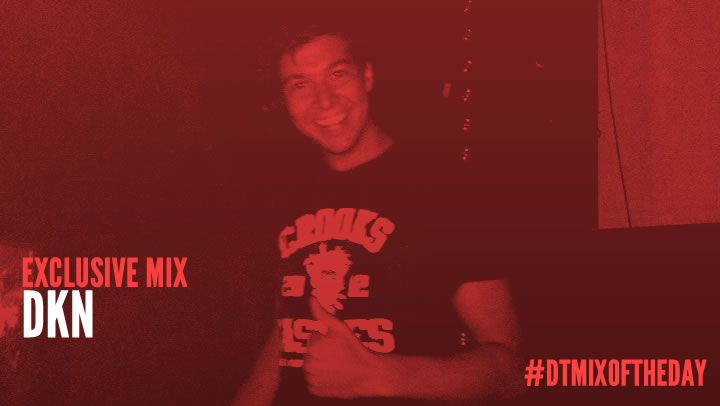