Echo Cat is the new Waves Factory emulation of the 1958 “Copycat” by Charlie Watkins, a tape delay with 3 playback heads mainly used during the 60s and 70s.

As digital technology develops so does the audio plugins and this one is proof of that not only doing an incredible job at emulating the hardware but also bringing more features to the table which would not be possible in the “real world”. 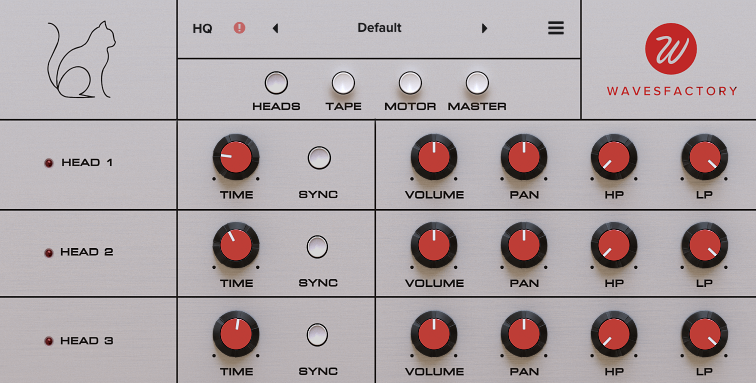 Let’s start with the heads: Previously on the original hardware the heads were pre-set, now you can modify each one of them to your taste adjusting Volume, Pan, Time (You can also sync with your DAW), a LPF and a HPF activating and deactivating each one of the heads from the white 1, 2, 3 buttons underneath.

Moving on to the “TAPE” we got 3 sections:

When getting to the MASTER there are some interesting features:

Apart from all of the main features, Echo Cat comes with an HQ button to allow oversampling, a Panic Button in case you need to erase the tape suddenly, 77 presets, the option of saving your own presets, a By-Pass button as Power ON 220-240 AC and if you’re having issues with the rendering of the plug-in you can try to enable/disable OpenGL on the top right burger menu. AH! I almost forgot. The screen is resizable!

Waves Factory Echo Cat really gave me the feeling of using an old analog hardware. For a producer in-the-box like me, it is an amazing way to get closer to that raw signal. I’m definitely using on my productions from now on.

You can grab the Echo Cat from Plugin Boutique here

The Brazilian Petrus Steil crossed the Atlantic seeking new experiences and he found it. That’s how Reverbate came to be. Even though the project has only 1 year of existence it carries a baggage with important experiences having played in clubs such as Index, District 8 and The Wright Venue, supporting high calibre artists like Gui Boratto, Victor Ruiz and Amine Edge & Dance. He also released in record labels such as Price Incorrect (BR), Puchero Records (CR), Data Transmission (UK), Lust Be (BR), Gangster Music (Chile) and Puro Groove (Chile). On the rhythms and grooves of the electronic music he found a new form of connection, not only within himself but mainly with the public. With intense DJ sets full of swing and energy Reverbate knows how to make the most diverse dance floors shake.