Single Of The Week

I’m hoping I’m not sounding like a broken record when I say that electronic music has turned the corner and found interesting again. Two of the protagonists of that story are Simon Berry & Luke Brancaccio, two of the most experienced electronic music producers on the planet.

When they started working together for the first time it was like a firework had been lit and off the productions shot, leaving tracers across the sky and the rest of us oohing and aahing. This latest chapter, Pukwudgie, is another page-turner in the book of change that is happening and it has all the elements of a best-seller.

Despite Pukwudgie sounding fresh and modern there are some obvious nods to the heritage of both Simon and Luke, call it experience, call it influence, it doesn’t really matter. The bassline and wonderful arpeggio, the length of the track at a whopping 11 minutes have a defiant stand in the history of classic progressive house and, let’s be honest, where else would you want this opus released than the wonderful Platipus. 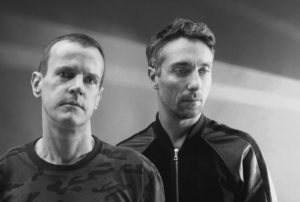 The introduction and build up in the first four and a half minutes of Pukwudgie is a chuggy, bass-driven, percussive groover, beautifully constructed and on its own is an invitation to the club to get ready, to move, to work the floor and open your mind. What it really is, is the fuse, the touch-paper that is slow-burning and leading you to the rest of the track. Consider it like walking down the Yellow Brick Road when everything turns to technocolour (see what I did there) and you look around amazed, for that’s exactly what happens when the breakdown kicks in.

There are arpeggios, counter-melody, rubber bass, lush pads and gated vocals. How they fit so much in I’ll never know. When the whole affair punches back into the groove at a solid six and a half minutes it is to a searing bottom-heavy groove with a touch of the Blade Runner about it. Simon and Luke have made an emotional journey of universal proportions, wondrous, like looking through a telescope and discovering a planet for the first time.

Gai turns in a sharp-sounding, techno-crossover that beautifully utilises the ambient elements and building through to a killer breakdown.

Barry Jamieson’s productions are as deep as they are sharp. The sound jumps from the speakers showcasing his vast experience and credentials with electronic music. His mix is mature as you would expect, but nicely paced and perfectly balanced.

However, the original is the stand-out track of the package. The task of remixing such a complex piece of work must have been intimidating and both remixers have done a great job but I suspect it’s the original you’ll be hearing this summer and for some time to come.

Simon and Luke are writing their own future and I, for one, am hoovering up the plot.