Pete Tong ‘Classic House’ with The Heritage Orchestra conducted by Jules Buckley will be released through Universal Music on 25th November 2016.

This union of classical music and iconic dance tracks is another bold, brilliant move from one of the most influential figures in dance music. The album and shows are a follow-up to last year’s triumphant Ibiza Prom, where Tong worked with arranger and conductor Jules Buckley and the innovative Heritage Orchestra and its artistic director Chris Wheeler to pioneer a show that melded the world of dance music with an orchestra. “It resonated with people in a magical way,” says Tong. The Proms had approached Radio 1 a few times about doing something at the event, but when they asked in early 2015 just as the station was pondering how best to celebrate 20 years of Radio 1 being embedded in Ibiza’s dance culture, everything clicked into gear. The idea was simple: classic Ibiza dance tunes but performed by an orchestra. It made sense that the station’s dance music trailblazer Tong would team up with the most exciting talents in orchestral music Jules Buckley and The Heritage Orchestra to curate and present the Ibiza Prom.

They will take the show to the next level with three UK arena shows in late November and early December and the accompanying studio-recorded album ‘Classic House’, produced by Mark Ralph and featuring Katy B, John Newman, Ella Eyre, Jamie Principle and Cookie, will capture the magic of a formula that reinvented and reinvigorated a number of club classics. It will include special guests – one of Tong’s favourite things about the original Ibiza Prom was how contemporary artists joined the dots between the past and present – and feature some of the songs that lit up the show. These will include the euphoric take on Fatboy Slim’s Right Here Right Now, a track earmarked to open the show, and the mesmerising version of Faithless’ Insomnia. Insomnia was the most repeated part of the set on iPlayer and ended up summing up the captivating chemistry between the two musical worlds. “Jules said to me on the day, ‘if you want to make something a bit longer, give me a sign.’ On Insomnia, what happened during the performance was literally on the fly. Then I couldn’t stop him, he’d turned around and was looking at the crowd instead of his orchestra!”

Tong’s main aim at the beginning of this project was that the Ibiza Prom wouldn’t be an “oldfest of reminiscing”. The event set out its stall and ‘Classic House’ takes it striding into the future. Dance music’s most potent game-changer has just reset the rules again. 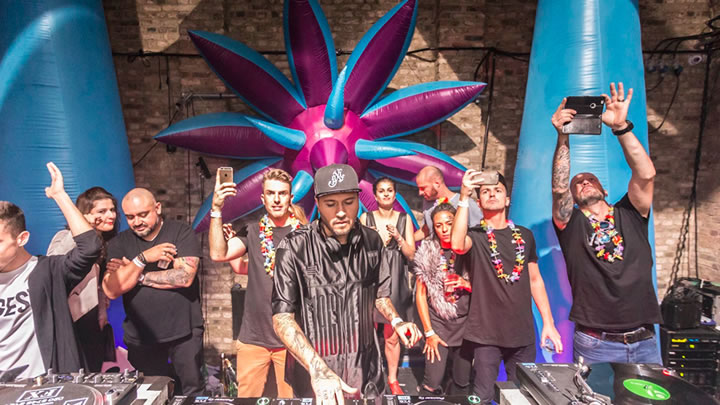 Reviewed: The Little Festival at The Steelyard
Joseph Dent October 20, 2016