We’ve been in Tisno a month. Tisno is not a big place. So far we’ve bonded with two of the local stray dogs, we now have to avoid two local restaurants after – following a fairly uniquely Yugoslavian amount of pressure – we conceded that yes we’d “hook them up with VIP” at the next festival, we’re still patching together memories of a few of the afterparties after we fell asleep from exhaustion and we’ve spent far too much time with an insane tattoo-artist and a travelling indian-clothes salesman. It’s time to go. Before we limp back off to Novalja however, it was time for one last festival.

Stop Making Sense, makes no sense. It’s a tiny, British (sub-1000) festival, situated in a tiny fishing village in Croatia. Yet, this awesome-audio-anomaly has been ticking along steadily since 2010. It boasts a uniquely London-warehouse-style line-up, and the promoters and parties are pushed as hard as the line-up themselves: Not So Silent, Phonica Records, AUS, Kiwi’s outfit Boom and London heavyweight contender Percolate are amongst the professional party starters that make this petite event possible. The line-up is impressive: Nick Hoppner and Anja Schneider, Tiger & Woods adding brands of European whilst the likes of Mosca, Maribou State, T.Williams and Will Saul keep things resolutely UK down on the A salt-stained Adriatic dancefloors. Here’s how it went down.

Day 1: We’re kidnapped by a Yoga teacher that wants us to film her being bodypainted nude, offsite. Later that night we head down to the beach stage to watch Mr Ties play a tough brand of analoguey tech house, equipped with an enormous, bizarre analogue mixer and a huge amount of cigarettes. Following that we head on down to the Barbarella’s afterparty to see Harri & Domenic go B2B.

Day 2: We wake dazed and confused in our PodPad, spend most of the day making like the crowd and aggressively sunbathing before heading down the the Woods Stage to check out Will Saul and Leon Vynehall. We meet an insanely gorgeous girl who tells us she’s Bahraini. We ask the usual in-retrospect-embarrassing questions about life in Bahrain which she laughs off with “British People” and disappears in a glow of hot red light. We quietly scream in despair. Leon drops a really good tune. The night is recovered. We head to Barbarella’s, again, and see Mr Ties, with his crazy mixer. We meet Bahraini-girl again. She buys a drink, pulls us to one side and says “Tell me, everything about you…”. DT can’t believe our luck, until our usual brand of luck kicks in and we’re essentially rugby tackled by a far sweatier, far more male person we’d met at pre-drinks before who starts yelling something indiscriminate in our ear. Our own personal Jasmine disappears again. Mr Ties drops a really good tune. The night is recovered.

Day 3: We wake up. Possibly in our PodPad. We struggle onto a boat party. On board Mosca is laying down a pleasantly jacking groove. We speak to him pre-set, and learn the following things:

-T.Williams is a really nice guy

-Vodka on a boat is better than vodka on land

-Please don’t write anything about Mosca.

He did, however, play a stonking set.

Day 4: Tiger & Woods more or less entirely destroy it on the Beach Stage. We’re in total amazement. We may or may not have woken up in a PodPad.

Day 5: Percolate have an all day afterparty, which we all-day sunbathe to. We meet Kiwi for a chat. We like this festival, we’ve decided.

Stop Making Sense is Croatia’s smallest festival. In its own way, it’s also a candidate for the best. It’s got an amazingly eclectic mix of people, students, grads, hippies, travellers, shufflers, sunbathers, experts on music, experts on relaxing. Kiwi feels like it’s a “beach holiday, and a festival, combined.” We feel like it’s more like a perfect houseparty – awesome, emerging, jacking DJs, a crowd of fascinating strangers, a lot of hazy moments, and serious plans to do this again, next year. We’ll come back.

Many thanks to the guys at PodPads for the VIP Glamping experience we enjoyed whilst at Stop Making Sense. See you next year! 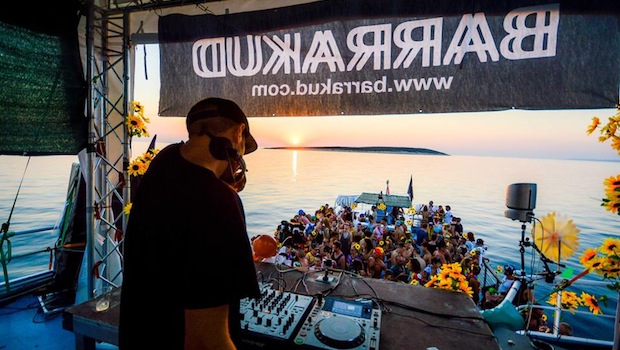