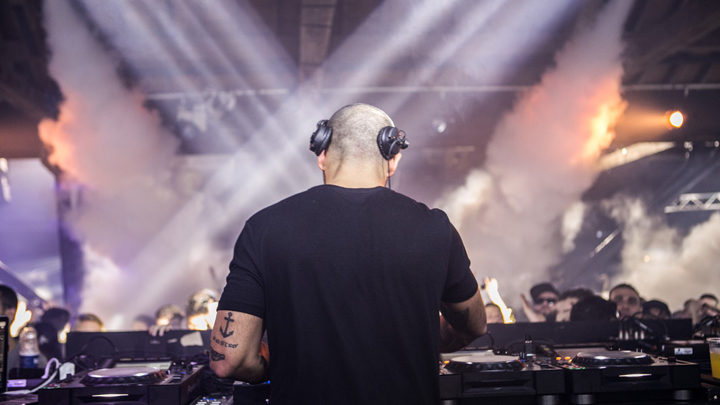 Berlin-based Italian Ilario Alicante is forging a formidable reputation as one of the safest pair of hands in the industry. So much so, that mentor Sven Väth rewarded him with 7-dates throughout the summer. So let’s take a look at his accolades. For starters, he’s the youngest DJ to ever perform at Time Warp and was once affectionately dubbed “Enfant Prodige“. Owing to a string of exhilarating sets, he’s also rapidly becoming our favourite DJ. Soon to embark on a South American tour taking in Chile and 3 stops in Argentina, Ilario Alicante’s star is one on the ascent. We sat down with him for an intimate chat in the Relentless Studio before his set at Drumcode Halloween.

With Mediterranean good looks and two full-sleeve tattoos, he looks every bit the part. He’s affable, with a cheeky smile more befitting an adolescent, perhaps masking a layer of shyness. He’s achieved so much in his career, it’s remarkable to think that he’s still a year shy of 30. He speaks warmly with fluent English (not that we expected anything less). A clubber first, and a DJ second; Ilart talks Drumcode, Cocoon & playing in London.

So here we are again, welcome back to Tobacco Dock for Drùmcode Halloween, we just wondered how big Halloween is in Italy?

It’s really big now, since, in the last 5-6 years. There are lots of parties and festivals. Especially now the biggest is Movement Festival in Turin. And that’s the highlight!

Talking of Italy, the techno scene is really very strong at the moment. There’s a nucleus of artists there who are arguably as prominent as DJs from German and Stateside. Is there anybody else we should be keeping our eye on coming through the ranks?

There are lots of Italian DJs right now producing really, really good music. There are 2 guys in particular, who will be releasing on my label, Virgo: SLV and Depo. They are making some really good stuff. So for me, these are the guys who are up-and-coming.

You’re a huge part of the Cocoon camp and you’re also heavily involved with Drumcode. What’s it like being a part of those two huge powerhouse stables? We imagine you get a lot of inspiration from Adam and Sven? Does it help you with Virgo?

Yeah. I mean, I’ve known them both since a long time. Being in contact with them, playing with each other lots of times, it’s normal that we exchange ideas. They are my inspiration. Sven, I have known many, many years. And we have a really good friendship. How he plays, how he transmits the energy to the people through the music is phenomenal. 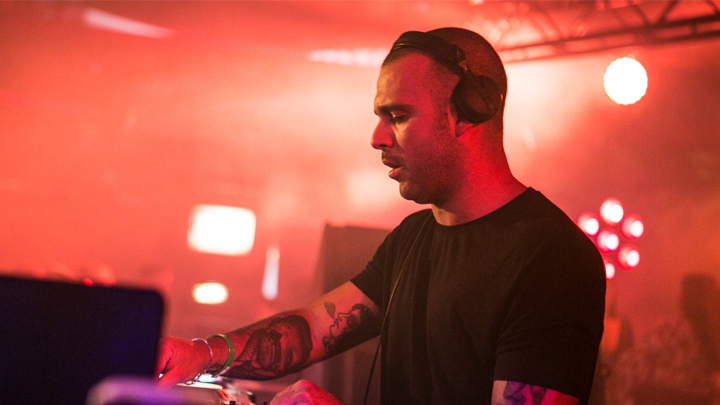 There’s a famous story about you making the trip all the way to Frankfurt to watch Sven and Richie play in your youth – I think 16 or 17 years old? – that’s dedication! Do you know how many round miles that is?

I don’t know. But we did it lots of times! We flew from Livorno – my hometown – to Pisa. And from there to Frankfurt. Every year we would go to Time Warp, Love Family Park, Green & Blue. For me, these festivals were really important. They inspired me. And I think it’s important for a DJ to be a clubber as well. If you are in the middle of the crowd, then you understand. You know what they want.

I guess, sort of linked into that – that dedication of travelling long distances to see your favourite DJs play – we wanted to ask you about comments you made earlier in the year about the rising cost of Ibiza. Pricing-out the everyman and catering too much towards the VIPs. If we could expand on that, it’s important we take this seriously, isn’t it?

It’s super important. If we don’t start controlling this, if we don’t take action now, maybe we will ruin the spirit of Ibiza. Ibiza is freedom.

Some people – some artists – will argue that the VIPs have been there since day one. And, actually, in a lot of cases the revenue the clubs and promoters make from the VIPs can help subsidise the cost for everybody else.

VIP, I accept. But we cannot alienate everybody else. In Ibiza, there was always VIPs. But they mixed with everybody else. They weren’t segregated. And I think we should try to fix this now because prices are going crazy! And normal people can no longer afford to come for a week or 10-days anymore.

Sticking with the subject of Ibiza, but perhaps more positively! – you’ve had possibly your biggest season to date. A handful of shows for Elrow, plus DC10 and of course your continuing love affair with Cocoon.

For me, Cocoon is everything. It was the first techno party in Ibiza. So it’s important for me to be there and be a part of it. It has an amazing history. And I will always put all of my energy into it. It’s my first love. A family.

Tying this round quite nicely, from one family to another. You’ve spoken in the past about how your mother, in particular, was a huge influence on your passion for music, introducing you to all these great records. 80s music, soul music. Do you ever get an opportunity anymore to play those kinds of records? We guess they’re limited?

Yeah. But it’s not always easy or appropriate to play that kind of music, of course. But I always try to be flexible. I don’t like to be only a techno DJ. Mainly I play techno, of course. But I like to explore all kinds of genres. So whenever I feel is the right moment, I’ll try to mix it up for sure.

You don’t fancy producing some soul music under an alias?!

I mean, I do produce under different aliases: ILL-R. I released some material about 3-years ago on my second label Deep Moves, which is a downtempo project. 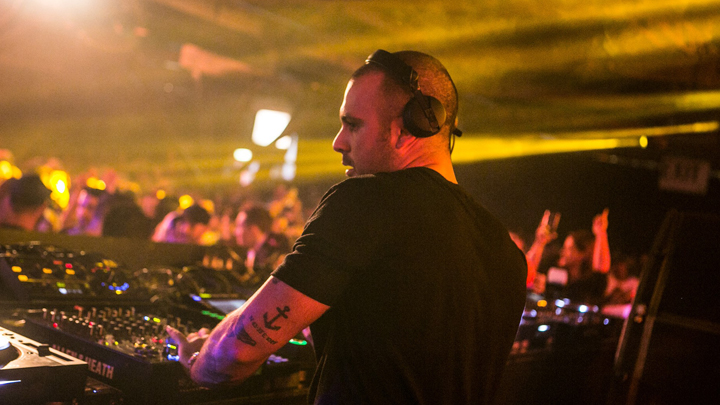 On the production front, your Awakened EP on Drumcode has been one of our favourite releases of the year. What have you got coming up?

I have an EP out, for about 2-weeks now, on my label called ‘The Eye of Virgo’. Then I have another EP for Drumcode that is almost ready. I’m just finishing the final track now – there will be four in total. After that I’ll be working on my next Cocoon release.

Finally, moving back to today, obviously it’s a daytime party, and your set-time is 5pm. But you’re also scheduled to play the afterparty – which would normally be the morning after… But in this instance, it’s at night! So does the dynamic change with those roles reversed? Are you tempted to leave a little in your locker for the afters?

Of course, normally I like to play different sets when I play an after hours. I always give everything on the main stage. But the after party is more intimate. So I can go through other styles of music, you know. So I can be more free with what I play. It won’t only be big peak-time music. So it doesn’t change – I will still play different.

We think we’re right in saying that today is your third date in London this year? If you include We Are FSTVL and August Bank Holiday weekend for Solo Danza. And you’ve also got a fourth date coming up before the end of the year – November 25th for Amnesia London: The Terrace Sessions at Electric Brixton. What does Ilario Alicante do on a typical visit to London? Is there anywhere, in particular, you like to chill? Eat? Record shop?

Normally I come, play and leave! That’s DJ life, you know! But I really like the city. I don’t know if I could ever live here. But I’d love to stay for more days. Maybe come beforehand and enjoy the city. Come and enjoy the nightlife! 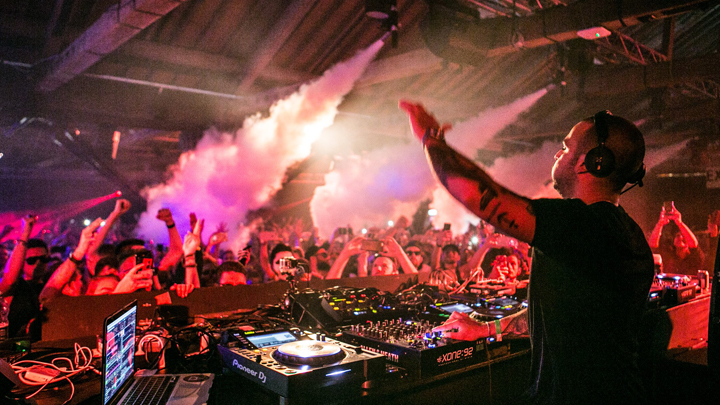 Later we head to the Great Gallery to catch his set, front-centre right in the path of the CO2 canons. The same spot, we suspect, Ilart would be himself if our roles were reversed. It’s nothing less than a rip-roaring set, as we’ve come to expect. Our highlight being an edit of Age of Love/Regal – ‘Pulsar’. One we’ve heard him play a few times this summer.

Now we look ahead to November 25th at Brixton Electric. We’ll be there. Front-centre as per (where else?) On this outing, we expect they’ll be a few more joining us for the ride! A star on the ascent he may be. But then again, it’s been that way for well over a decade and he just keeps soaring higher!

‘The Eye of Virgo EP’ is out now via Virgo and available from all good download stores.

Her Future Ghost with Tim Green 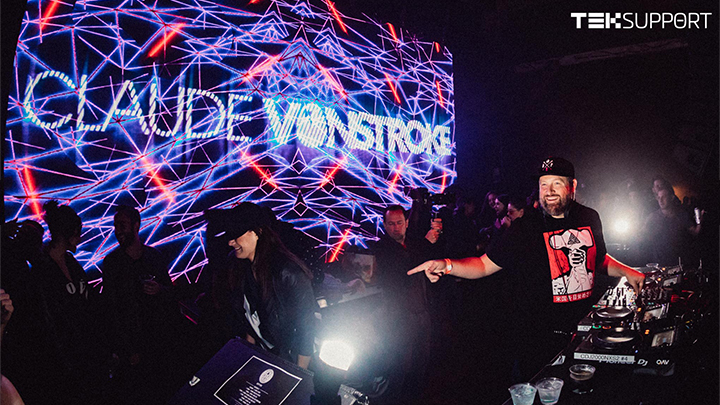