A Guide to Vujaday Festival in Barbados 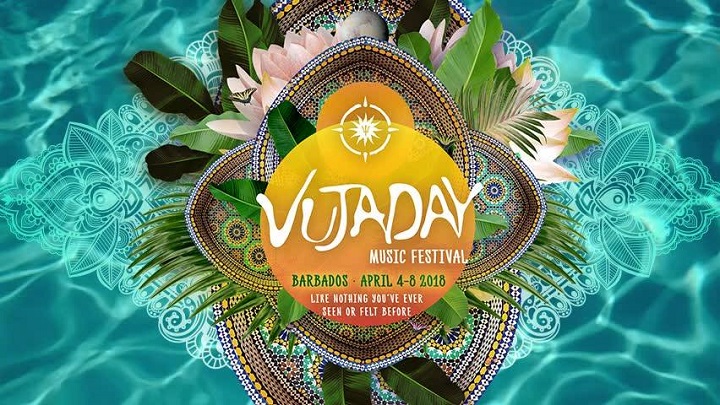 This April Data Transmission heads to the Caribbean island of Barbados for sun, buns, and festival fun. In an age where music festivals give fans feelings of déjà vu, Vujaday promises a brand new festival experience. “The name is the opposite of déjà vu, it means, like something you have never seen or felt before,” says Vujaday cofounder and Further Future producer, Ryan Kruger. Known as “the gem of the Caribbean,” Barbados provides the perfect backdrop for a beachside adventure: safe country, friendly people, stunning beaches, and an invitation by the government and tourism board. In a recent interview with Forbes magazine, Kruger says “Barbados is a modern country with modern infrastructure which is perfect first for a great vacation, then a great festival.”

Of course adventuring to a destination festival promises memories to last a lifetime (unless you’re Fyre Festival), but there’s more than beats and beaches to experience. We’ve gathered some knowledge on the best that Barbados has to offer in terms of food, fun, and excitement so visitors can get fully immersed in the Vujaday experience.

Barbados was voted one of the top Caribbean destinations for travel. Perhaps its the warm culture and friendly people that welcome visitors to the island, or maybe it’s because Barbados offers the world’s tastiest Cou-Cou and Flying Fish. Sure that all sounds grand, but the Cou-Cou is best enjoyed alongside a variety of beautiful beaches. Head to the island’s west coast for calm azure waters and sandy pink and white shores. Enjoy a relaxing swim and snorkel sesh at Brandons Beach, Batts Rock, Fitts Village, Paynes Bay, Sandy Lane and Folkestone Park in St. James, or soak up the sun in Mullins Bay and Heywoods in St. Peter. Adventurers can indulge in jet-skiing, kayaking, catamaran cruises, swimming and snorkeling in the calm crystal blue waters that the west coast has to offer.

Heading south you’ll find flawless golden sand beaches and livelier waters ideal for a host of watersports including windsurfing, kitesurfing and boogie boarding. Affectionately nicknamed the ‘Fun Coast’, the beaches and bays of the island’s south side are great for thrill-seeking adventurers looking for day to night fun. Beaches and bays to visit include Accra, Brighton Beach, Browne’s Beach, Carlisle Bay, and Cotton House. Moving along the east coast the beaches are wide, wind-blown and not recommended for swimming. Ideal for surfers, the east coast shore is pounded by the Atlantic so if you want to make it to all the Vujaday parties we don’t recommend swimming on this side of the island. Head up north and take in breathtaking views of coral and sandstone cliffs that can rise up to a hundred feet out of the sea.

That means traveling off the beaten path and finding back street cafes, street vendors, and fresh fish markets. Found within the beautiful waters of Barbados lives an abundance of marine life which means islanders enjoy some of the freshest fish dishes that the world has to offer. Dine like a local and indulge in some dolphin, maceral, swordfish, and traditional Bajan dishes. Be sure to taste Cou Cou served with Flying Fish, the national dish of Barbados. Somewhat similar to polenta or grits, Cou-cou is made with cornmeal and okra. Find your way to Oistins Fish Fry on the south coast, a must for incredible food including the Blue Marlin Cutter sandwich and Mac Pie! Local fish markets are a great place to pick up the catch of the day at bargain prices; have a street vendor throw something on the grill while you get lost in sunset views. For a livelier scene head to “the street that never sleeps” a.k.a Baxter’s Road in downtown Bridgetown. Known not only for its nightlife and non-stop music, Baxter’s is praised for its variety of delectable fried-fish stands posted alongside the road. Though you’ll encounter street vendors throughout the island, Baxter’s road is where you want to taste the Islanders’ favored fish balls. Be sure to stop for street vendors throughout the island to enjoy fresh coconut, fresh fruit, plus many other fresh treats that Barbados has to offer.

Bathsheba is home to a small community of fishing families, Bajan visitors, and surfers that live for the East Coast’s pounding waves. This is where you’ll discover hidden attractions such as Welchman Hall Gully, Gun Hill Signal Station, the Morgan Lewis windmill, and peaceful Joe’s River Forest. These areas are best explored by jeep tours, or maybe rent your own jeep and zoom along winding paths, grassy hills, limestone cliffs and river gullies. Head up to the North Point of St Lucy to witness nature at its finest at the Animal Flower Cave, the island’s lone accessible sea cave. Where the Atlantic meets the Caribbean sits the cave’s seaward entrance and coral steps, a discovery made in 1750 by Welsh naturalist and author, the Reverend Griffith Hughes. Once inside the cave you’ll encounter sea anemones, which locally are known as animal flowers Though this natural wonder was formed at sea level, the cave stands six feet above the high water mark because Barbados rises 1 inch every 1000 years. After gathering an appetite from cave swimming, make your way up to The Restaurant at Animal Flower Cave and enjoy local cuisine with breathtaking views. 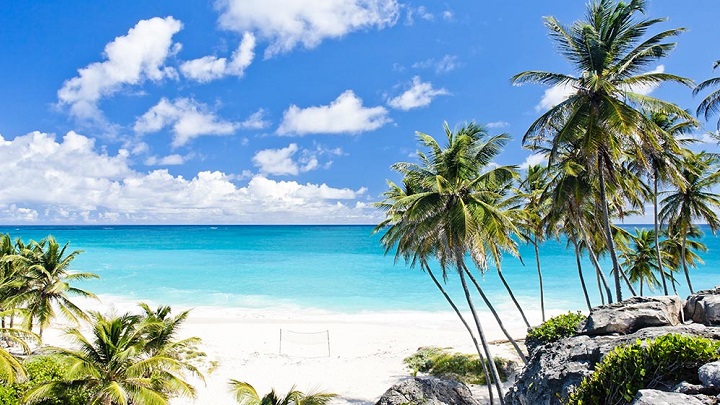 Travel inland to experience one of Barbados’ greatest wonders – the magnificent Harrison’s Cave. Located in the central uplands of the island, this crystallized limestone cave is outlined by flowing streams, deep pools of crystal clear waters, a profusion of native flowers, plants, towering trees and animals unique to the island such as green monkeys (you can look but don’t you touch – see list of what NOT to do below). Folkstone Park Marine Reserve has an exciting water trail for snorkeling as well as a selection of historical museums; the Scotland District is an unspoiled area of rugged and forested highlands wonderful for exploring on foot or by jeep.

Feeling ultra adventurous in between Vujaday parties? Plan an Island or Sea Safari Tour to take in the vast scenic beauty and animal life found throughout the island and surrounding waters. Start by exploring the unspoiled countryside and picturesque East Coast lands before setting sail on a diving or snorkel expedition. Barbados is home to the hawksbill and leatherback sea turtles which can be spotted along the island’s west coast. Due to the calmness of the West Coast waters and the friendliness of these island creatures, visitors can swim freely alongside the seas turtles in stunning turquoise waters. Jeep and catamaran tours with open bar/buffet options available. Check out the Island Safari website for a full list of tour options.

Each of the five Vujaday locations offers a unique setting that showcases the island’s natural beauty. Nestled along Barbados’ south coast is The Tiki Bar which overlooks the calm, aquamarine waters of Rockley Beach. This open-air bar will serve as the pre-party to the main event each day and features a colorful array of 68 house cocktails. In the snorkeling hotspot of Carlisle Bay sits Pirate’s Cove, a gorgeous outdoor space that allows festival-goers the rare and sublime pleasure of dancing in the sand. The coconut palms and thatched umbrellas provide plenty of shade for those who require some relaxation. Shifting gears from beach to mountain is the Cornwall House, a private estate with a swimming pool that features a striking vista of the rugged Bathsheba coastline. The Bellevue Plantation features spacious, lush garden grounds, a large swimming pool, and a beautiful bar area. And for the full-on beach fiesta head to Copacabana where you’ll enjoy a stage in the sand surrounded by beach chairs, umbrellas, kayaks, and an epic dance floor. More info on the VIP venue and the exclusive afterparty venue will be announced soon so stay tuned.

An itinerary of TO DO’s is set, now here’s a list of what NOT to do in Barbados…

The team behind Vujaday brings decades of festival and nightlife experience to the beautiful island of Barbados. The founders have owned and operated world-renowned Toronto nightclubs Footwork, Coda, The Hoxton and The Velvet Underground, as well as produced prominent festivals including Digital Dreams, Electric Island, Further Future, World Electronic Music Festival and All Day I Dream.

Get ready to embark on a remarkable journey where island relaxation and festival culture seamlessly intersect. Head to VujadayMusicFestival.com to purchase tickets, plan travel, and learn more about this unique Caribbean experience. 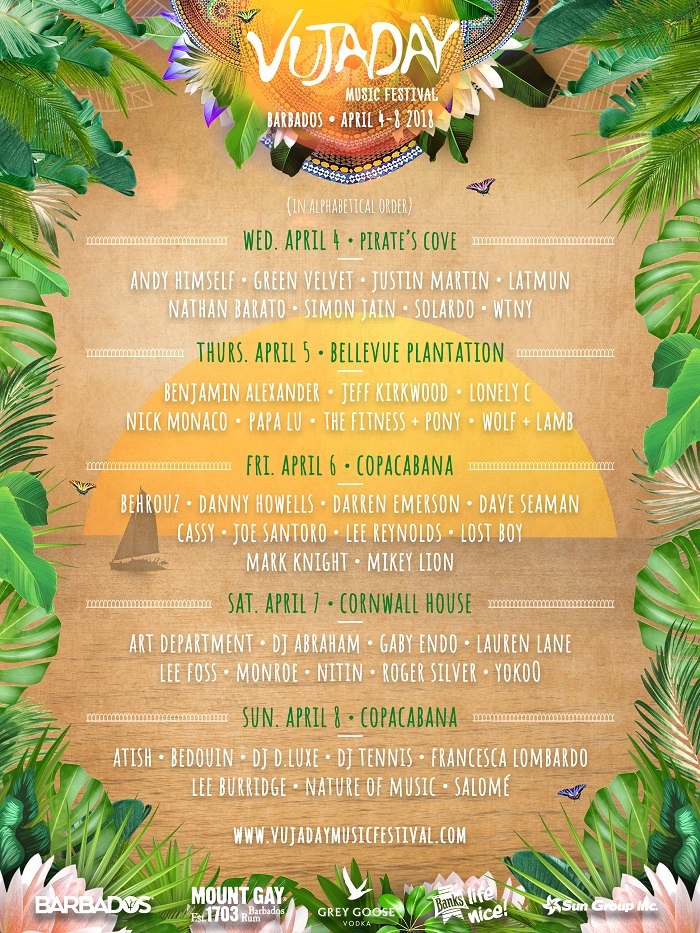