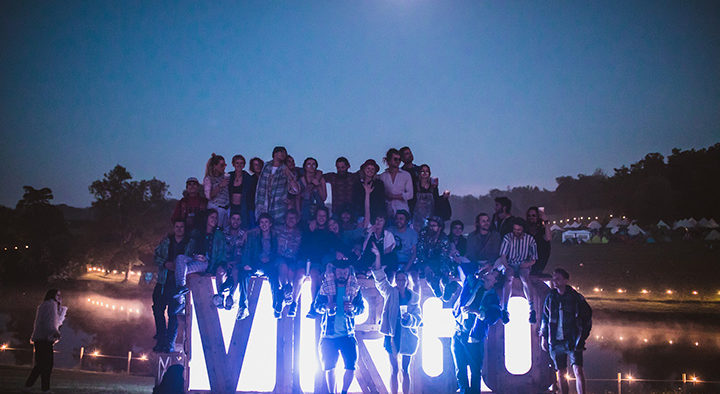 Virgo is the celebration of a huge network of friends, artists, musicians and good music in the rolling hills of Devon. The festival is curated by a small but mighty crew and is a testament to their ability to get the right people together and get a party started. At all times you are quite literally a handshake away from everyone – as a few hours on site quickly reveals that not only do the DJs know each other but punters, artists, stage managers and even the build crew all seem to be friends. This connectivity shines through the event from every level and has made it really stand out as something quite different from other boutique festivals on the scene. The result of all this is an event that feels like a reunion party full of some of the best selectors, dancers and all-round party people anyone could ask for, and apparently, we’re all welcome to join… 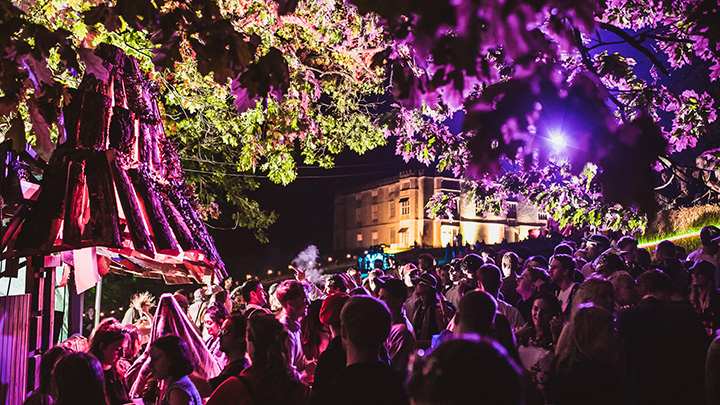 A perfect blend of regal yet familiar, the Fulford Estate is the sort of space that is endlessly refreshing to explore, but small enough to find your mates without a half marathon. After testing the waters with the main stage last year, Virgo now installs 4 point sound from Funktion One in all it’s musical spaces and the 360-degree coverage gets a resounding yes from me. Now 4 years in, Virgo stands stronger than ever and laid out a feast of delights.

The Jam remains at the centre of the experience – a beautiful walled garden that holds much of the crowd in its flowery embrace. A Love From Outer Space (Andrew Weatherall and Sean Johnston) were the big name draw of the weekend and showed the Jam what they are made of on Friday night. The 80’s space mission sounds were undeniably appropriate and launched Virgo in style. The avoidance of big cheap thrills drops and the unabated commitment to slow sounds were clearly approved by the rammed dance floor. A Love From Outer Space may have started as a b2b act and event project, but it has grown into a clinical and intriguing act that has an unspoken synergy between the two at the heart of it. This was strictly head in the game business and I liked it. Solid booking. 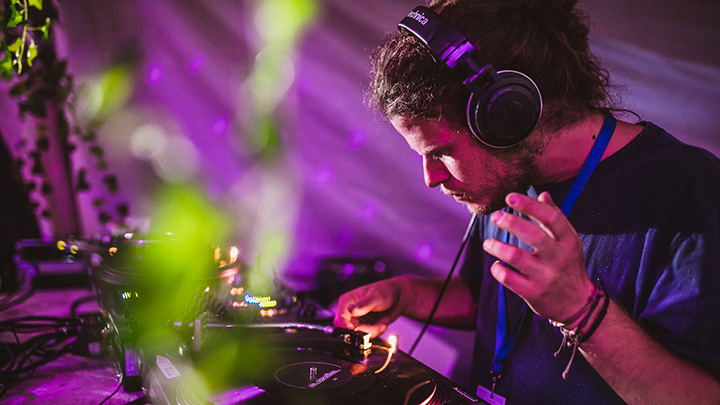 Dan Shake has now become synonymous with the festival as a flagship headliner and for good reason. Mahogani Music has taken Dan to new heights, but his beginnings lie in Leeds alongside many of the organisers and collaborators. Pure dance floor fever erupts every time the main man steps into the Jam, and this year saw more grins and shapes than you knew what to do with.

The Jam continued to pump out nothing but good vibes and intrigue all weekend and saw Prosumer, Tristan Da Cunha and Evan Baggs each give a masterclass of their own tastes and desires.

The Saratoga Stage became the hub for all things funky as a new glitzed out geo dome replaced the low-slung chill space of previous years. The dome stepped up to the task with YoungOnes residents Hoochy and Clive setting the tone on Saturday afternoon with hard, no frills thumping disco. Velv.93 took to the decks with chuggy techno that caught attention and got the people dancing until the early hours. Penya played a really interesting selection of world and dub sounds with 2 beautiful vocalists. One of the singers interchanged her vocals with trombone throughout – an instrument you don’t often see donned over these genres. 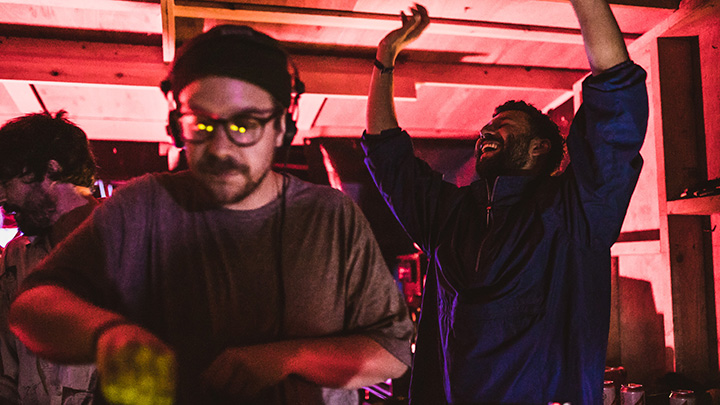 Judging from the vibes, however, it was Leah Floyeurs closing set in the Saratoga that stole hearts. Two hours of clinical, punchy, strictly vinyl techno selections were the talk of the town and were a nice pat on the back for the Virgo team to keep entrusting primetime slots to the underground.

If the Jam and Saratoga were the staple diet of the festival then it was the Rainbow Shroom that provided a little pudding. With the DJ inside the distorted wooden mushroom, a stack of hay bails to dance or chill on and beautiful giant unicorn tail LED lighting throughout the over looming tree, the shroom eventually lured you one way or another.

Pablo V & Hecha were probably the happiest DJs I saw there all weekend. These guys had seriously good taste in all things funky and took us through an afternoon of pumping saxophone jazz house and glitchy numbers. The boys from Mavrik have been making movements in London town with their disco and funk but decided to pull out a serious party set with garage and hip hop undertones. Having seen them before I was surprised to see that they had this secret heavy side to their sound but it was really well received and effortlessly mixed. As the weekend moved on the Shroom grew heavier and heavier and drum and bass began to make an appearance. MPH of Audiofarm played a tasty rolling set and dropped ‘Virgo’ by Marcus Intalex – a nod to the Manchester hero on the anniversary of his untimely death. 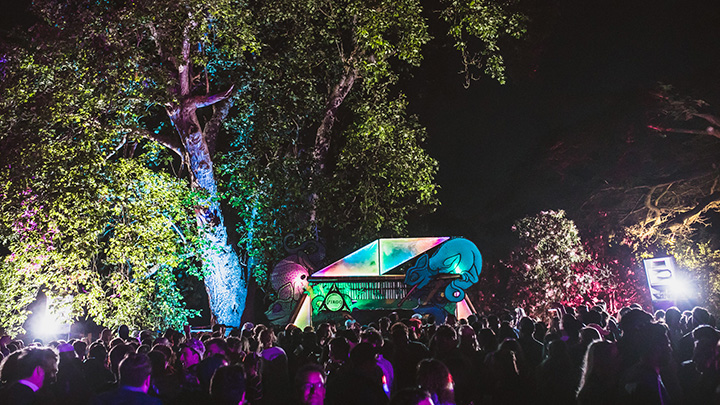 Finally, this year saw the addition of a new healing area with a chai tent, yoga workshops, fire pit and a cushioned ambient zone for the slow and deep end of the spectrum. This was the home of sounds for those looking to dip out of the full flow, with dub, reggae, downtempo house and world music taking over. Having a space to wind down en route to the campsite was a nice addition and I look forward to seeing how the area progresses in future years.

Virgo is a festival firmly entrenched in the grassroots of the UK music scene. Of course, there are brilliant headline acts and a wonderful setting but the heart and soul of this festival is its commitment to the underground and to the relationships at the heart of it all. This is a festival that celebrates the parties and the friends that are flourishing and the bottom line is that Virgo will always be about crate diggers, selectors and good people. The growth here seems to be focused on an attempt to give balance to the festival site and to make it a more immersive experience by spreading out the genres and sounds. 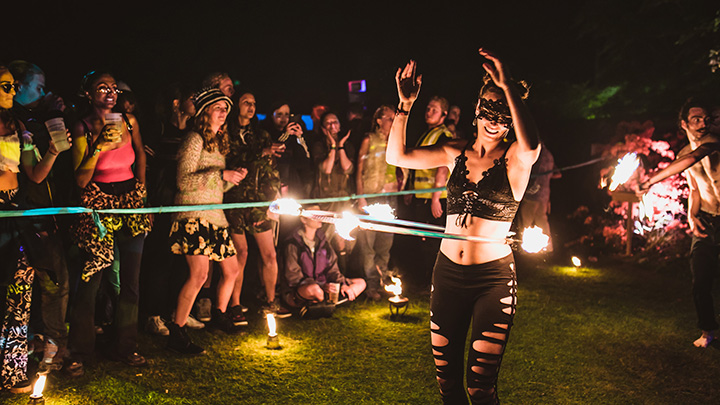 Progression, it seems, does not necessarily mean filling a line up with loads of producers that every man and his dog have heard of. The overall result is a festival that is not trying too hard to gain numbers and appeal to the mass, but instead is putting trust in its approach and its people.