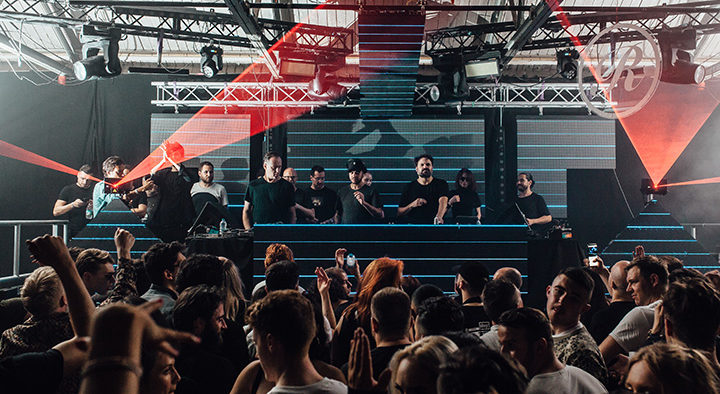 When I heard that Renaissance Records had come out of hibernation to put on an event, I was there! Arriving in Birmingham (Brum) on a sunny Friday afternoon, I was pleasantly surprised by the city, being a Brum virgin. In all honesty, I was a tad anxious for what the night ahead had to offer; I’d heard rumours on the grapevine regarding the ‘aggie’ crowd, and that it’s quite common for events to be cancelled due to promoters, police, gang issues or a mix of all three. Either way, I was intrigued and ready to have a great night.

Days before the event it had been reported that the original venue had been temporarily shut down by local authorities and Renaissance had to find another home for the night – up stepped Boxxed. After getting to the venue and a swift entrance inside you were greeted with what felt like a small festival tent at the back of the site; intimate, full of energy but with visuals to compete with a main stage. Marino Canal was gracing the stage to a near empty room but still produced an excellent warm-up set. Next up were Agents of Time (DJ set) – the Italian trio has quickly built a reputation for high energy, melodic sets that take you on a journey, and they did not disappoint. They delivered a well-built set, demanding more and more energy from the crowd, including a personal highlight when they played Quenum “Solitaire”.

Arriving 10 minutes late, Tale of Us opened their set with the unreleased “Nova” and then continued with an hour of high energy, dark, aggressive melodic techno, which has become their staple sound over the last few years, as they’ve moved away from their deep house roots. Their set just kept on giving. Then sets up, Sasha who intricately mixed their last track into his first, the Maceo Plex Renaissance remix of “Bladerunner”. Instantly that continued the vibe and sound from the Tale of Us set, which included dropping Afterlife favourites like Denis Horvats “Modelo”.

Thanks to all who came out to play last night, lots of familiar faces🙏..,The handover 🤝… Maceo Plex Renaissance Remix of Bladerunner, due for release early summer 🙌🔥❤️🎶

I’m not a big fan of hour long sets, as I feel the moment you start to catch a vibe, they’re over! But the great thing about this event is you have two, one hour mega sets from Tale of Us and Sasha respectively. However, we still had the real treat, which was the first Tale of Us b2b Sasha set for the remaining two hours. Now although I would have preferred for Tale of Us to play a bit more of their darker sound throughout the b2b set, all three DJs were chucking a high energy house vibe which leaves the goers wanting more even at 5.40am when the club was scheduled to close at 5. They ended there b2b set with the Energy 52 “Café Del Mar” Tale of Us remix, which was an electric and euphoric end to a mammoth night.

The only downside to the evening was the male toilets (think low budget festival meets nasty) but everything else by Renaissance was spot on! Venue (even with a last minute change), sound, lighting, DJs and crowd were all top notch! Amazing night, the only question now is what’s next for Renaissance?

Agents Of Time team up with Mathew Jonson for a brand new EP
Nicholas Wind March 21, 2019