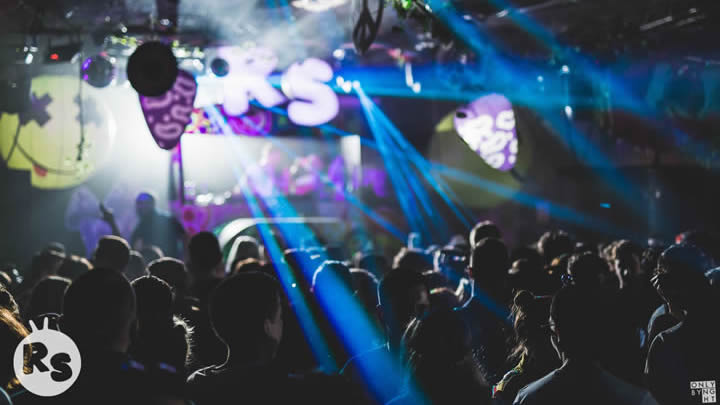 It was the start of the Easter Bank Holiday weekend and I decided to kick things off with the mighty Regression Sessions. The festival-tinged event series is the brainchild of Michael Mouch and Anna Herbs. The story goes that they went to a load of festivals during the Summer of 2012 full of glitter, loud outfits and fun times. Upon their return to London, the clubs they went to during the Winter felt very dark and moody comparatively. They thought to themselves why can’t we bring that Summer festival vibe to the nightclubs of London and that’s pretty much exactly what they did and then some. Since then it has evolved and grown into one of the pioneers of the UK scene. You have to keep in mind that this was started during a time before elrow (which only came to London in March 2015) when 4 walls, a good sound system and decent headliner would satisfy the punters. The idea of having inflatables for people to rave with at your event would have seemed ridiculous back then. Fast forward to 2017 and people are now expecting to be blown across the spaces in their minds. If there isn’t a confetti cannon blowing ice cold jets of paper money and sound waves directly into your face or a laser show strong enough to blind you into submission then you’re losing at least 1 star when it comes to a Facebook review from a chin-stroking hipster the next day. 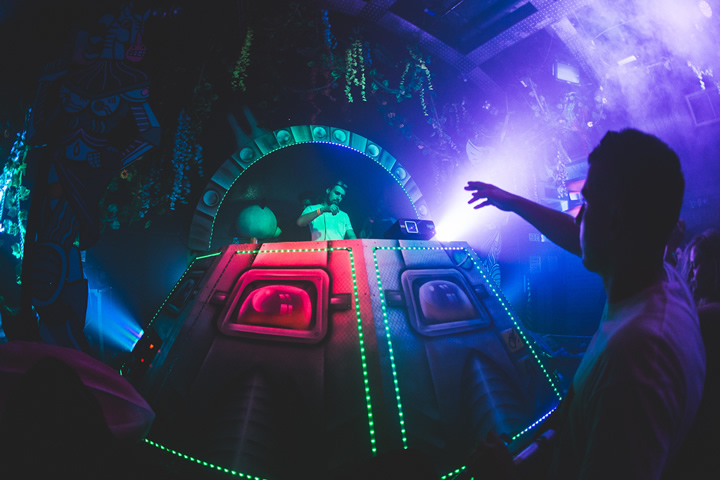 Their aim is to return attendees to an earlier stage in the psyche when everything was simple and fun was easy. Maybe it’s just me but I am in this state perpetually. I live and breathe the mantra. I think it actually perplexes people how I manage to sustain such a lifestyle in the reality of an adult world. My advice is to stop worrying about what other people think and just get on with it. So off I went to their 5th birthday being held at Bankside Vaults, an archetypical under the train tracks venue next to Blackfriars Bridge. I had first heard about the venue when Maceo Plex was doing his Mosaic Party on NYD and had been wanting to go check it out ever since. Plus the Land of Nod theme made it ripe for knocking off the bucket list. Over the years these guys have had the likes of Roger Sanchez, Marshall Jefferson, Richy Ahmed, SUBB-AN, Adam Shelton, Citizenn, Audiojack, Maxxi Soundsystem down and their 5th birthday was no different with headliners Ninetoes and Toyboy & Robin on the bill. The night was spread over 4 main arches. 2 arches for music; a house room and DNB room. The other 2 arches making up the bar room and chill out/smoking area. It reminded me of a rave that got me into raving called Planet Angel which used to be hosted at the now defunct Hidden Nightclub in Vauxhall. Almost classic in nature in the sense that there was something for everyone there both musically and interactively. A rare species in the London rave repository. Whether you go to stand by the speakers and feel the drum and bass in your chest or go to get glittered up, put on your pink wig and jump in a ball pit like a child there was a spectrum for all. The venue itself I would describe as a slightly grimier version of The Steelyard but nowhere near the scale of The Warehouse Project. 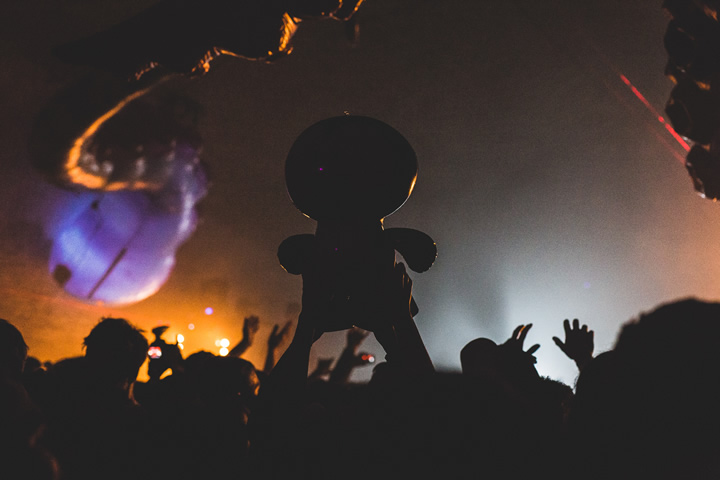 Upon entry, I was informed that someone had managed to get a wee bit over excited and knock their own teeth out. How one does this beats me but what is a rave without fools. I was promptly introduced to ‘The Mighty Mouch’ who reminded me of a friendly bear with the personality to match. He took no time at all to get me settled in on stage in the house room where I belong with a few drinks in hand. Pals from my Manchester Uni days Toyin Mustafa and Rob Drake aka Toyboy & Robin were getting the crowd going with their crowd-pleasing mix of rocksteady rollers and bang tidy classics. It was great seeing and hearing a testing of their new track ‘This That’ which will be released on Regression Session’s own record label this month Palace EP RGS002. You can get a taste of how that went off here:

I spent pretty much the entire night on stage in that room. The arches lent themselves to the production which included LED hula hoops, giant dream catchers, traditional lampshades and birdcages containing freaky looking baby dolls floating through the ceiling space. On stage, the production was centred around a clouds theme with Elmo and Pink Panther performers getting down alongside tasty females in bodacious get-ups. Even me and my missus ended up dancing on stage in Mario and Luigi costumes. We couldn’t resist. They were just lying there. It was a simple and fun choice to put them on and get our groove on in front of a couple hundred ravers. Less thinking, more doing. 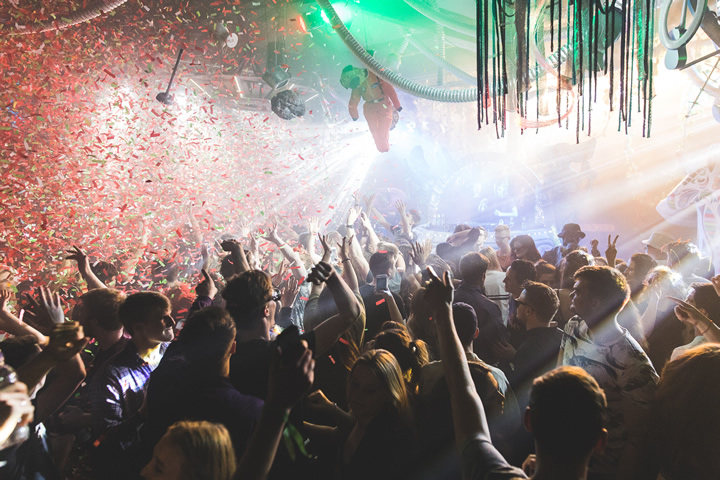 After an amazing set from Toyboy & Robin, Ninetoes came on to grace the decks with his mix which veered towards the colourful and deeper end of house rainbow. I distinctly remember confetti canons going off when his Summer vibe weapon ‘Finder’ was unleashed peak set and people losing their shit. Following from the starter of a night I ended up at the main course after party with the Regression Sessions crew which went on till about 3pm the next day. I was informed midway through this morning that this also happened to be the home of the Ketflix & Pills (181,000 FB page likes) and Sesh Club (28,000 members in FB group) crew. I only mention this to make you the customer understand that these guys and girls well and truly live and breathe the lifestyle. Parties put on by seshion heads contrived in a rave mecca just like it should be. A few days later after the bank holiday when we’d all recovered I managed to grab a few words with James Wright, 2nd in command:

You guys are renowned for putting on parties with pretty wild themes such as Space Safari. How do you come up with them?

The first time was about 1.5 years ago. Before the themes, we had the ball pit, bouncy castles and space hoppers. Naturally, we wanted to freshen it up a bit and take the events up a level. We were driving up to Scotland for an event in Edinburgh. It was 10 hours and we wanted it to be productive so we started brainstorming some random ideas together. We thought for each theme to merge 2 ideas into 1. Space Safari speaks for itself. The Land of Nod was something surreal we wanted to do for our 5th birthday and are taking on our UK tour next month. That idea started as Dreamworld. Hippie Trippy Shakedown seemed right at the time. That was our first themed event. Was a nice one to ease everyone into. We usually do the brainstorming over a couple of drinks or on long journeys. 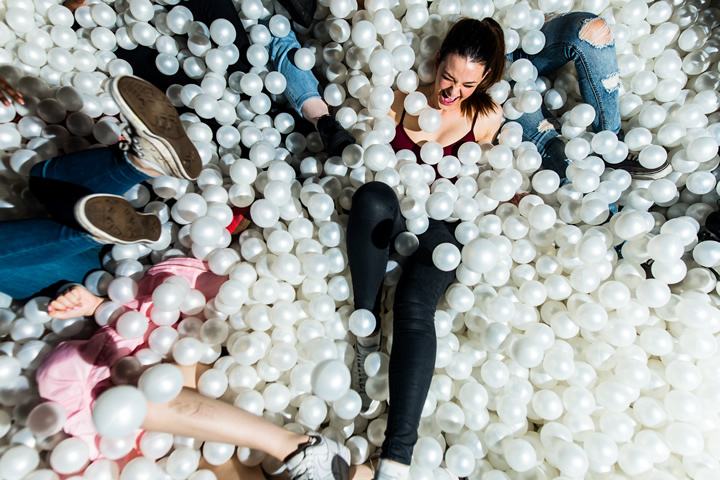 The themes are good because it gives everyone a centre point to focus on as opposed to just rocking up and listening to a DJ.

A lot of people are doing it now. When I went clubbing at university standards were a lot lower. You would just pitch up and listen to music and there might be a shitty laser. Now everyone is trying to outdo each other and people are expecting more for their money. It’s hard finding that winning formula, but we’re always striving to give our crowd something different and unique! 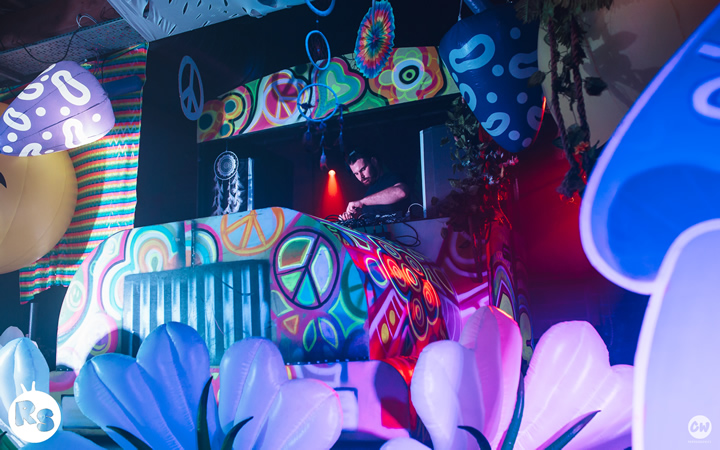 What have you got in the pipes?

Themed nights we’ve got coming up include Birds of Paradise at Fire and Lightbox on 3rd June and Red Light Apocalypse at Ministry of Sound on 8th July. We’ve also got a mini tour with Toyboy & Robin. We started up our label in February and our second release is going to be with them. They’re coming on the road with us. 26th May Canal Mills in Leeds, 27th May Antwerp Mansion in Manchester, 28th May we host our own stage at We Are FSTVL in London, 2nd June Lakota in Bristol. The Palace EP will be released a week after the tour ends. We’re getting some remixers locked down for that at the moment. It will be a very strong release so watch out! 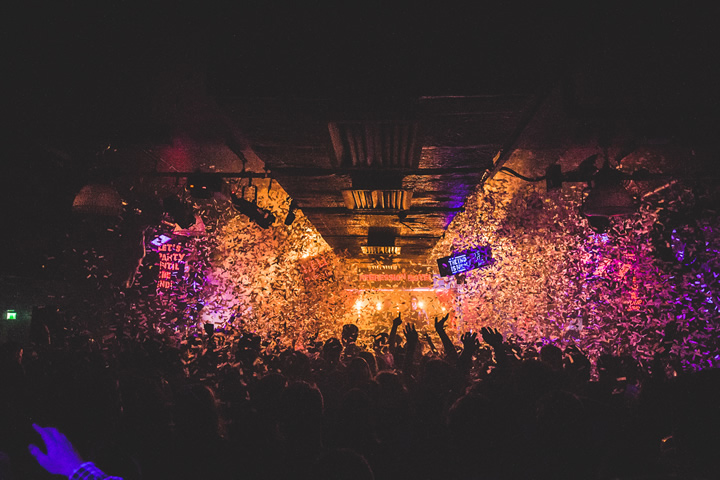 Tell us about the label?

We were thinking about calling it RS records but we decided to keep it simple with Regression Sessions and build it in with our events. Myself and Josh Carew head it up. The first EP was a 3 tracker called ‘Hit The Club’ from a sick producer called Mad Villains based in Leeds. The tracks are absolute fire including 2 originals, one of which is a collab with Maxine Garman, and a remix by Djoko. It charted at 40 on the tech-house chart on Traxsource.

How often are you going to be releasing music from the label?

Every 2 months, so 6 releases a year. The plan is to put releases out and do them in conjunction with a mini tour. Part of a package to get the artists out there a bit more. Gives them something to shout about.

How did you meet Toyboy & Robin?

At university actually. They played at my night Nine Lives at Joshua Brooks once. I’ve known them since then. We all went down our separate paths and now have reconnected through the industry really. Once the tour’s done our final party with them will be at Secret Garden Party 21st July.

Jack Swift and Devstar as residents then. It’s funny I’ve been following Devstar for a couple months and met him for the first time at your 5th birthday. He had no idea who I was obviously haha. And Jack Swift is another great one. He was always my source of old school garage mixes back at uni. So been listening to his stuff for about 6 years now. Met him for the first time properly outside 93 Feet East after the His & Hers party a couple weeks back. They’re both Abode residents now aren’t they?

Yeah that got announced a couple months ago. They’re blowing up.

Good choice of residents. How did you bring them into the fold?

They were already residents when I joined Regression Sessions. Jack came up to Mouch and handed him a mixtape CD in a queue or something and the rest is history. He’s been playing for us ever since. Our other residents are Mista Bounce, Naked Jake (1 half of the London Disco Society) and DJ SD.

I’m also one of the residents Granite State.  Had a bit of success with an EP I released on East Recordings recently. The EP was called 338. The track ‘Tuku’ did pretty well in the tech house charts and reached 30 on traxsource which is quite good for a debut release. It got featured on Toolroom Records radio show last week. Quite funny hearing Mark Knight saying Granite State on the radio haha. Had a few labels firing me emails after that asking for originals and remixes which is nice. It’s not tech-housey, I play a lot of melodic stuff which is quite different to the tech-house that everyone is bashing out at the moment. I’m working on a remix for a German label right now. Stepping stones man.

So to summarise Regression Sessions have 7 events coming up:

Great choice of venue in each city for the UK tour. 4 themes to choose from depending on taste. 2 festivals. You really are spoilt people. Start messin and get regressin 😉

Mix of the Day : Jamie Haus We Concur Residency Mix 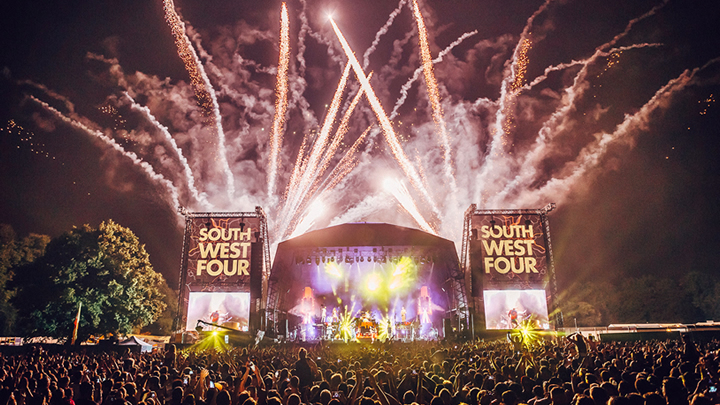