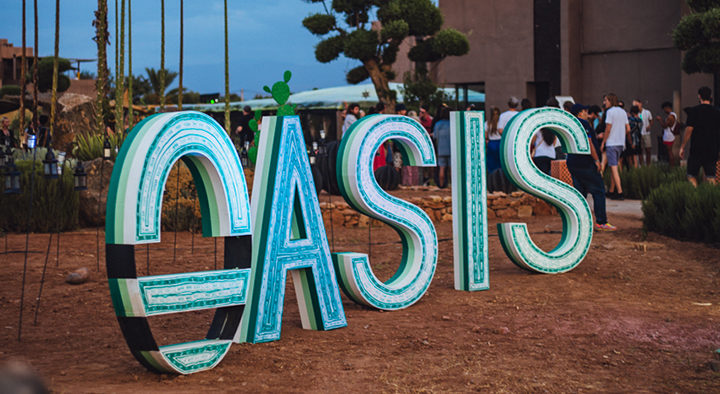 Let me tell you why Oasis needs to be on your festival checklist for next year. My second time returning to the festival which is now in its fourth year and they’ve gone back to their roots and returned to the original site The Fellah Hotel Marrakech.

Similar to last years site (The Source Hotel) The Fellah grounds also have tiny winding paths & off road dirt trails with various herbs planted around, still making it the best smelling festival ever. Stages surrounded by bamboo trees, handwoven lanterns hanging around some cleverly placed lighting and smoke machines helps to create a mystical ‘Oasis’ of an atmosphere. 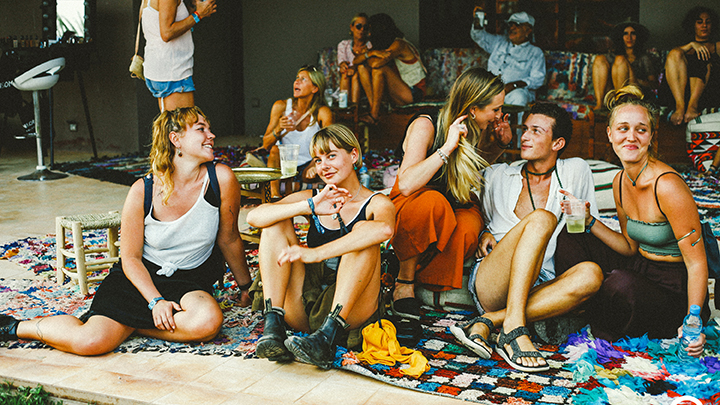 This year there were 3 main stages, Oasis, Bamboo & Mirage and 2 smaller hidden ones also playing music during the day. Each stage had a very different feel with the Oasis one having a huge pool covered by decking which got quite bouncy when it filled out. The bamboo stage was my favourite, literally an arena surrounded by huge bamboo trees with a little island in the middle with a moat. Needless to say, not everyone stayed dry at that stage after it got dark! Finally, the Mirage stage was very open with a big pool and lots of inflatables and a big chill out space, each stage carried its own unique sound and atmosphere on each day. 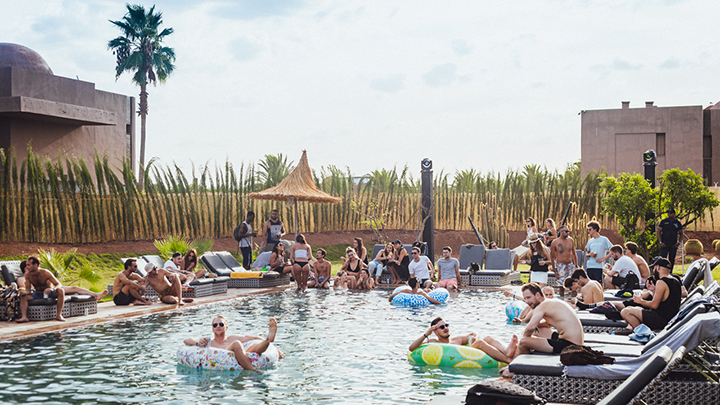 One of the more hidden locations Welcome to the Kingdom was a little fashion boutique showcasing some of Amine Bendriouich’s modern and vintage fashion expressions and some of Africa’s finest contemporary art. You could even get a haircut in there! After having scoped the site and met some raving buddies it was time to get stuck in, straight over to the Bamboo stage to catch one of Australia’s best CC:Disco! Have to say I have never heard such booming disco, it was a heavy hitting variation with dirty basslines and uplifting vocals.

Switzerland’s finest, Deetron over on Oasis stage, let’s go! Accompanied with his usual 3 deck set up and versatility in the music game, he was slinging out vocals, house beats & techy wobbles seamlessly and captivating the crowd There’s no chance for a rest when Deetron is playing. 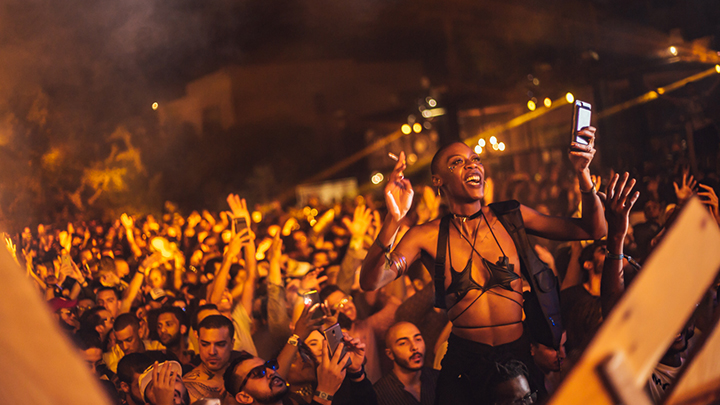 Nastia was up next and her goal of making people dance was definitely achieved, the main stage was packed with high energy and good vibes right in time for Paula Temple to take over with an intense dosage of hardcore techno. Having never seen the self-confessed noisician play before I didn’t know what to expect but she was relentless. No shadow of a doubt my love for heavy techno has grown after watching her bring such energy and when she was ready to go, she smiled to herself, swiftly shut her laptop and strolled off stage like a boss!

None other than Berghain resident Ben Klock closing out the main stage turned the day to a techno marathon with a class display of his skill to curate a vibe and atmosphere. 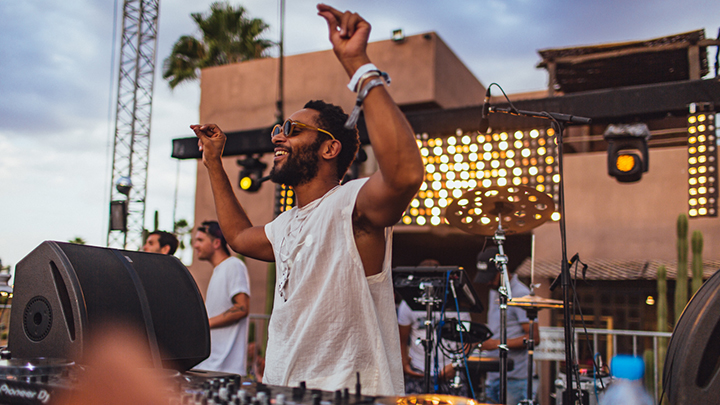 Arriving on the second day I noticed a bit of a theme in the style of music being played and soon discovered they have a music called ‘Gnawa’. It’s the sound of south Morocco and music of the Nomads and it’s a very repetitive almost tribal style of music which many of the Moroccan DJs were able to mix in with techno/house bassline to create a unique sound. William Djoko was on the main stage getting his groove on with super uplifting tracks and high energy behind the decks, I mean we all love it when the DJ is loving it too right? What a character!

Triple back to back set next with Oasis champion Amine K, Denis Horvat & Alex Niggemann. Three talented DJs for 3 hours all from different parts of the world coming together to create something special. Combining techno & melodic Gnawa sounds it had a real tribal vibe and the Moroccans were absolutely loving life. 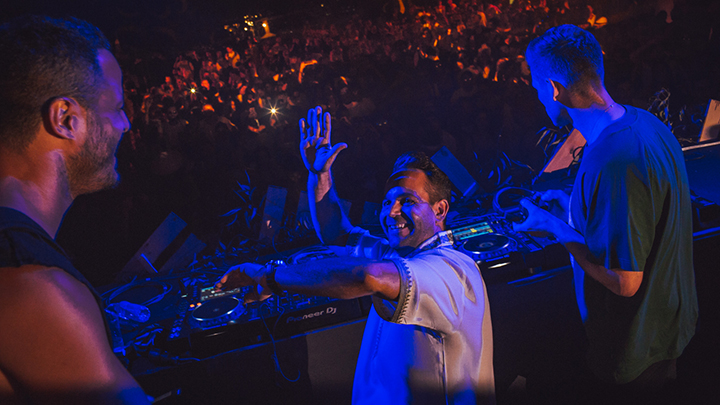 Anyone who has seen Carl Cox play before will know what I mean when I say he lives up to the title of the King. After the close of Space, he spoke about doing fewer shows and only hand selecting where he plays around the world and being my first time actually seeing him play I was blown away! The man knows the recipe to create a sick party and also one of the few that can get away with using a microphone. Mixing in Ultra Nate’s – You’re free with a banging bassline to close out was cheeky. Smashed it!

My final and favourite day at Oasis and I could hear the sounds of La Fleur through the bamboo shoots and so dived in to get my wiggle on. Fighting to the front to find out who is creating these Tech house vibrations and I discovered a little Swedish woman dancing around behind the decks, damn she got good vibes, definitely recommend catching her set if she’s on a line up near you. 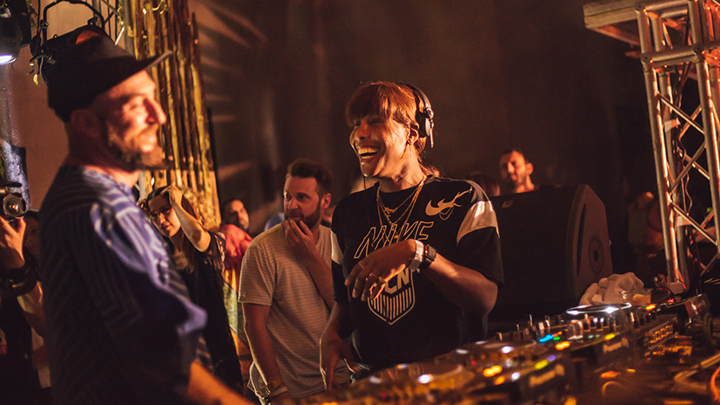 Crosstown Rebels boss Damian Lazarus took over and drew an epic crowd. Bringing that house & techno sound he’s infamous for, his music is somewhat of a journey, really curating a well thought out set leaving us wanting more. Here’s my next dilemma; Honey Dijon up next and Derrick Carter b2b The Black Madonna are over on the main stage, damn. Honey Dijon got started and I had to stay for at least an hour. Jacking house & Chicago techno running through her veins and being a common name on Defected’s line up it’s no question why she causes chaos on the dancefloor, mixing in hip-hop vocals to big beats had us captivated but we had to catch some of the main stage and we were not disappointed we did.

What Derrick Carter & Black Madonna created was something I had never seen before. Soulful, housey, bouncing, vocal, bassy, disco & techno all in one set! The flavour and energy they were creating was sick, to be able to be that versatile and bounce off one another behind the decks was a true display of mastery. These Chicago house heavyweights are one not to be missed by any means! 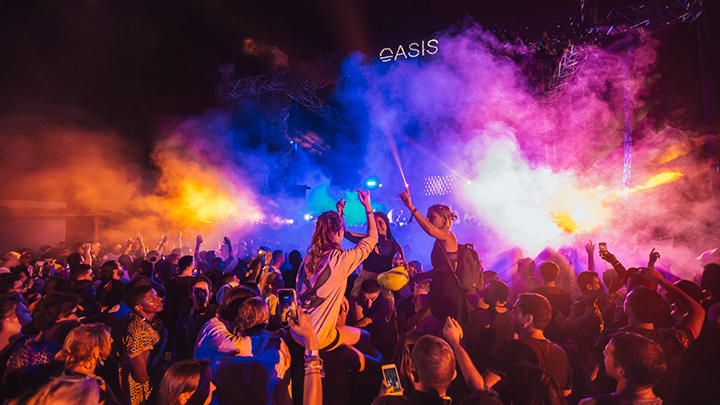 The penultimate to take the stage, Black Coffee steps up to fire up the dancefloor with his tribally infectious, vocal-laced beats, anyone familiar with Circo Loco will know what I’m talking about. Finally, German DJ & producer Koze stepped up to close out Oasis. Slowing down the pace a little with some atmospheric techno breaks between heavy vibrations he left us feeling fulfilled.

I find there are 3 key ingredients to a good party; venue, crowd & music and honestly there was a lot of skill, diversity and creativity among the talent attending; a true display of some of the best underground music around. Combining that with an absolutely stunningly designed, quirky festival site with a lot of attention to small details and originality then sprinkle a diverse, open minded and loving crowd of people from over 45 different countries and sounds like you’ve got the recipe Oasis!
Thank you for having me and you know you’ll see me next year still chanting ‘Crepes & Vibes!’