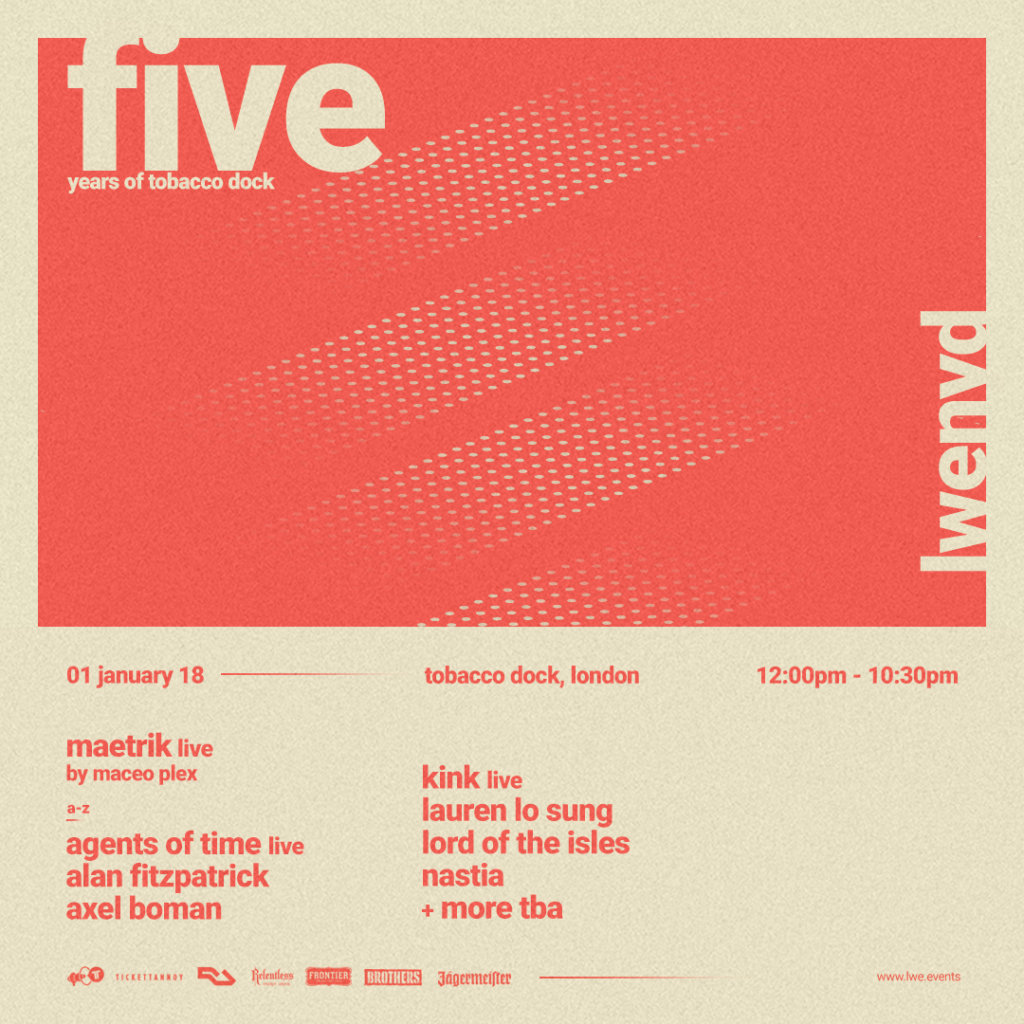 Over the past 5 years LWE have built quite a reputation for hosting some of London’s biggest and best parties across breath-taking event spaces, this NYD I opted for Tobacco Dock as it’s become somewhat of a tradition for me.
Given it’s a daytime event (12:00-23:00) the chances of getting there for the start of the event are always ambitious on NYD. After doing the essential locker & token run we were ready to scope the talent and where better to begin than the Car Park, my favourite room at Tobacco Dock. We rolled into Rhymos booming bouncy house vibes, the atmosphere was uplifting and the dance floor still had plenty of room to bust a move. I noticed the production levels in the Car Park had improved massively since last year with lights and lasers running all the way down the narrow walls as well as up by the stage. Up-front house sounds had lifted my spirits and attracted quite a crowd, Rhymos had certainly warmed us up for Alan Fitzpatrick who was taking over next. 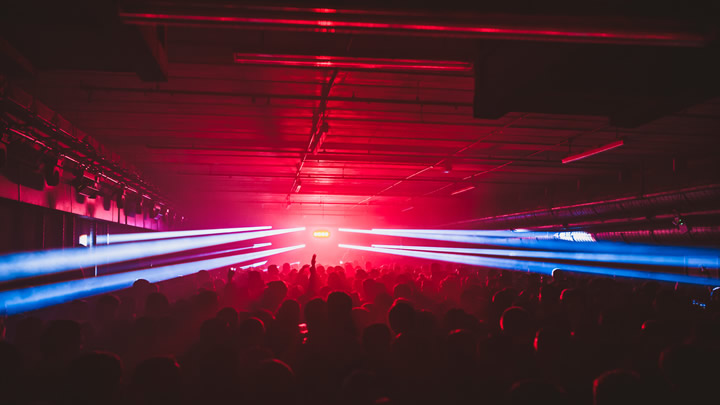 Alan Fitzpatrick kicked off his set with a somewhat darker sound than his predecessor, with a super heavy measure of bass and drums. The Car Park had quickly filled out minimising space & oxygen, luckily Fitzpatrick was throwing down techno wobbles and percussion holding us together. Although the Car Park is a big space the feel was intimate and the music was on point, we reluctantly battled out through the crowds eager to get a front row space in the Little Gallery.

We arrived at a rather empty little gallery which was perfect after how compact the Car Park was, yet again the layout of the room had completely changed; with webbed ceilings, colourful lighting and a larger stage with double the capacity.

KiNK‘s grinning face had appeared! Holding one arm high in the sky and with each flick of his wrist a booming drum was heard, anyone familiar with KiNK’s style of a live set will know to expect the weird, wonderful and adventurous. The first 10 minutes started off quite deep and techy with him building on this sound progressively, the room was now fully packed as it should be. 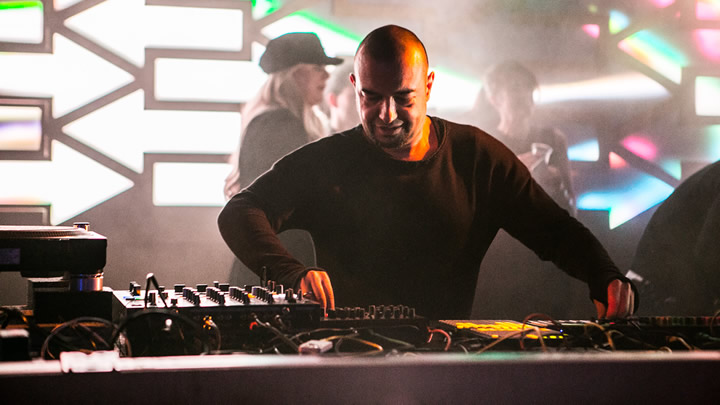 Transitioning through sci-fi techno beats and lasers, the sound evolved into a melodic disco-y vibe earning a huge reaction from the crowd, few sets are known to have as high energy as one of KiNK’s. Still grinning and bouncing away, paying close attention to the crowd he dug deep in his equipment box and pulled out a vinyl deck and was tapping away on a record to bring in those breaks he’s well renown for while banging out some chords on his handheld keyboard, he was loving it and the crowd were feeding off that energy. Towards the end of his set, the pace slowed a little and got deep and softer – what a set, the sheer amount of different techniques and equipment that he uses is impressive as well as being able to improvise with different sounds and feed the crowd that energy, definitely a must see. 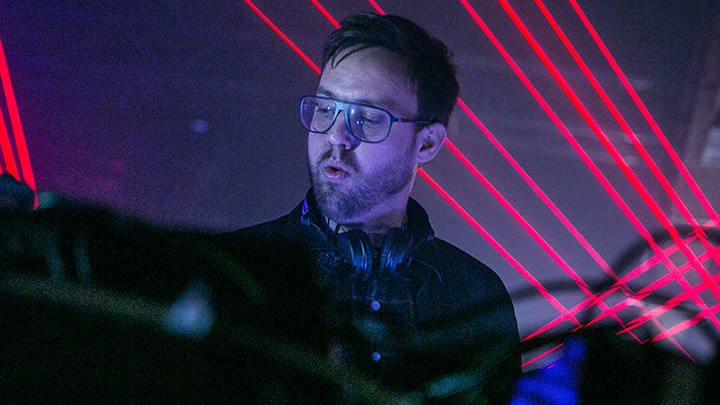 Off to the Great Gallery to catch the end of Maetrik live (aka Maceo Plex) and as expected a deep bassline is rolling, red lasers shooting from all angles make for an impressive light show, the production across the venue had been upgraded massively and the Great Gallery showcased it well. A reliving kick-drum with accompanying high hats joined the party and the crowd responded, techno fan or not, Maceo or Maetrik are renown for delivering big build-ups, heavy drops with dark basslines and today was no exception.

To finish the day off we scoped out Floorplan in the Car Park, to no one’s surprise it was packed out, this father-daughter combo are a rare occurrence in the DJ world but they really work well together behind the decks to produce a unique minimal tech/gospel house sound. Given the setting of the Car Park I felt they opted for deeper techno wobbles and breaks through this set, their energy behind the decks was wicked with b2b tracks bouncing off each other the difference in sound was clear through hearing Robert Hood‘s sets before, the sounds Floorplan were creating together was definitely something that had evolved through pairing up with his daughter. 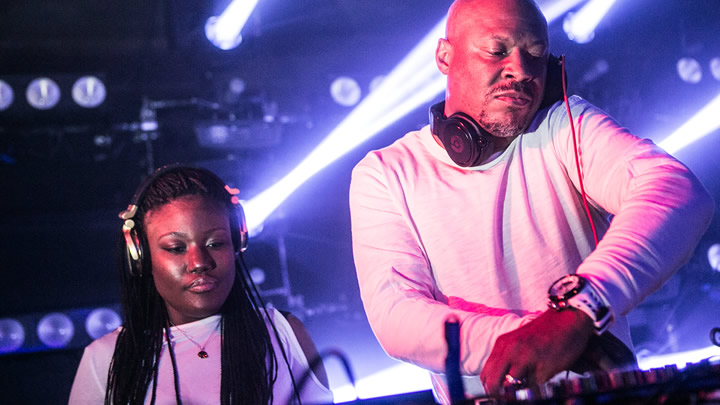 All in all, LWE, you did it again, the venue, quality of music and production is ever unmatched for a New Year’s Day party. See you next year for more good vibrations! 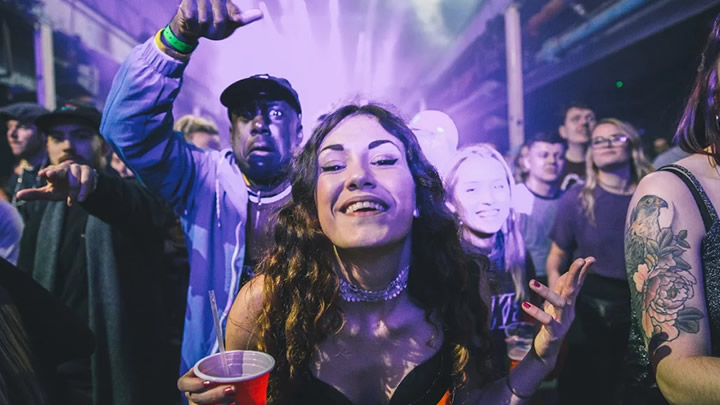