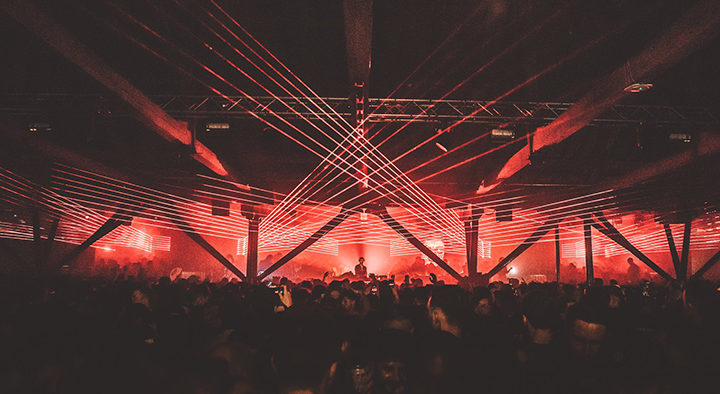 Everybody loves a bank holiday because it calls for a well-earned weekend of raving. Whether you’re out on just one of the days or all three, there’s always somewhere to go and get your groove on. We were lucky enough to find ourselves down at Tobacco Dock for Hot Since 82’s Labyrinth. Fresh from a season in Ibiza, Hot Since 82 brought the heat with a stellar line-up consisting of some of the big dogs in the scene.

We arrived in East London at about 2pm and after the usual pre-rave business we were inside the main lobby of Tobacco Dock. Ambling through the venue, scouting out each room, we decided to start off in the Little Gallery. Kicking things off for us behind the decks was William Djoko and let’s just say, it was the proper way to start the day. Dishing out some absolute thumpers Djoko was getting the party off to a great start. The atmosphere in the room was electric, the low-down ceilings and netting really added to the vibe, creating a proper intimate setting. Pumping out one of his crowd favourites, ‘William Djoko – OMG ft Camilo’, Djoko had the ravers on their toes. The percussive, bass heavy monster had the speakers wobbling all over the room, proper heavy duty.

Moving on quickly, leaving the Little Gallery with high expectations, we headed into the Great Gallery for the wizard that is Butch. The Great Gallery, dark and dominating. The perfect setting for a thumping tech house set and who better to deliver than Butch. Everyone who loves house music loves Butch, synonymous for his unique approach to production, Butch always knows how to get a crowd grooving. Throwing out tracks such as a remix of one of his own, ‘Butch – Countach (Kolsch Remix), the room was bouncing. This melodic stomper was doing the Great Gallery justice as some sporadic strobe lights flickered about the place. Track after track, mix after mix, Butch was dictating the party like a true party animal.

Before shooting off into the Car Park for house head Eats Everything, we decided to take a little stroll back into the Little Gallery for the sounds of Archie Hamilton. A set that we had been waiting for all day, it was time for some serious minimal tech house rollers. Planting ourselves in the front row seats, deck side with the man himself, we had the best spot in the house. Hamilton’s energy behind the decks was just what we were looking for, grooving away in true style, Hamilton pumped out an absolute ear teaser, ‘Rhoowax & Iglesias – Keep On Dancin’’. A proper wobbler, beeps, squeaks and some tingling hi hats. Impossible to praise it enough, Hamilton had selected one to remember.

When people talk about Tobacco Dock, one thing that always comes into conversation is the Car Park. It’s no understatement, it’s literally a car park and it’s unbelievable. As you take the long walk through the venue, down the tunnels and into the dark underbelly of the Car Park, it starts to feel a little surreal. The thumps of some heavy techno numbers hit your chest before your ears as you slowly reach the entrance. A pitch-black car parking lot with an array of strobes, the atmosphere is something of a dream for any techno lover. Line-up heavyweight, Eats Everything was taking to the decks to show everyone just what the Car Park was made of. Clearly, everyone was thinking the same thing in wanting to see him as it was absolutely rammed. Rammed to the point that you couldn’t even make it far enough into the Car Park to even worthy being there. Nonetheless, top dog Eats Everything was giving the fans just what they wanted, shelling out some pumpers like one of his new ones with Matador, ‘Eats Everything & Matador – Burn’. A bouncer, one to get you bopping from front to back in time with the beat, one where you can just ride the groove of the tune. The set was electrifying, absolutely popping but it got to the point where it had to be called off. Too busy, past the point of being safe and no rave is worth it if you can’t even enjoy it because of the sheer amount of people.

Time had moved on ever so quickly and we found ourselves back in the Great Gallery, waiting for the head honcho himself Hot Since 82 to take to the decks. The house icon kicked things off with a bang, pure energy. With some stellar pickings such as ‘CamelPhat & Au/Ra – Panic Room’, 82 had everyone in awe for the final set of the day. This one was a proper crowd favourite, with a similar sound of ‘CamelPhat – Cola’, it had the crowd bouncing all over the place. Another track that caught our ears was a proper party starter, ‘PAX – Every Night’. The vocal loop of the words ‘Every Night’ met with some quick hats and thumping kicks, this track was a force to be reckoned with on the dance floors. Thoroughly selecting his tracks, 82 mixed his way through to the final minute of what was a truly remarkable day.

And there it was, another day, another dollar. Hats off to Hot Since 82 and the rest of the gang, they put on a truly spectacular show once again for us ravers and it’s safe to say it was definitely one you shouldn’t have missed!