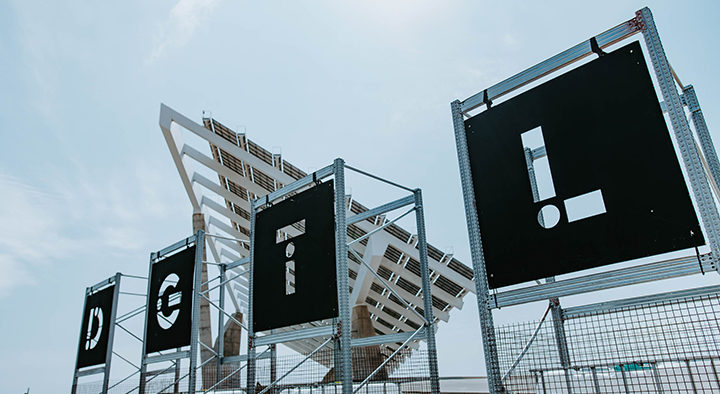 On August 10 and 11, the 4th edition of the DGTL Festival was held in the Parc del Forum de Barcelona.

With a line up of more than 60 artists, distributed among the 4 stages of the festival, more than 35,000 people enjoyed a weekend of quality Techno, with some of the most relevant artists of the moment.

Since its appearance in Barcelona 4 years ago, the Dutch festival has not stopped growing, both in terms of attendance and production quality. With different art structures and an Imaginarium based on the industrial aesthetics of the main festival of Amsterdam, DGTL has positioned itself as the most sustainable festival in the Spanish territory, its goal is to generate zero waste for 2020, something that is greatly appreciated due to the huge waste problem that exists in the city each summer, generated mainly by the massive and festive tourism that the city attracts. In addition, and against the general trend, DGTL increasingly attracts local audiences (50% in 2018, compared to 10% in 2014, according to festival data). Along with the music on offer, mainly Techno, House and Disco, DGTL is one of the most anticipated events of the summer season in Barcelona. 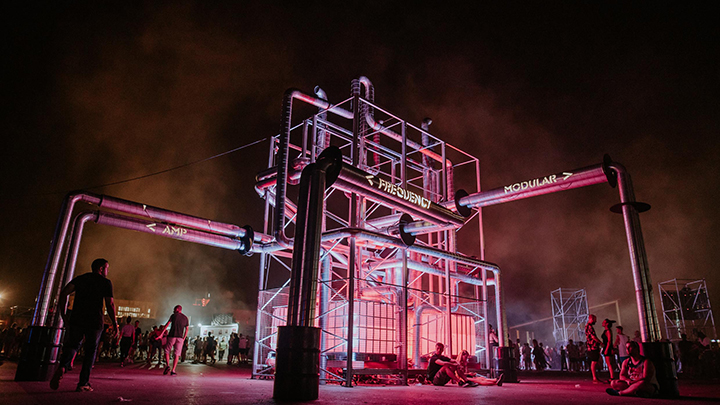 The festival started on Friday at noon with simultaneous performances in the four stages of the festival: Modular, Generator, AMP and Frequency. In spite of the heat and the little shadow of the enclosure, from the first hour, we already began to perceive that the attendance was going to be multitudinous. As a curious fact, three of the first performances were offered by local DJs, something that is not very usual in the international festivals of the city.

IVA, a DJ from Derrick May’s ‘Transmat’ label, was in charge to start at Modular, the main stage, with a dark and mental Techno set. After her, we could enjoy on the same stage the beginning of the set of DJ Fra, a resident of Apolo Club and one of the most emblematic DJs of the city. Anika Kunst did the same on the Generator stage, with a more forceful set, full of Acid and Rave sounds, while Sonodab offered a more melodic set, with a progression towards Electro sounds. Abu Sou, creator of the local platform ‘Canela en Surco’, was commissioned to premiere the Frequency stage, undoubtedly our favourite festival scene. Through African and Caribbean sounds, boogie and disco rhythms, the Galician born delighted us with an ideal session to start moving the skeleton, creating a space of good vibes in which only smiling faces were seen. After him, the co-founder of ‘Líbido’ label & music platform, Pau Roca, was in charge of continuing to maintain the good vibes, increasing the intensity as the stage was filled, with a more personal style. 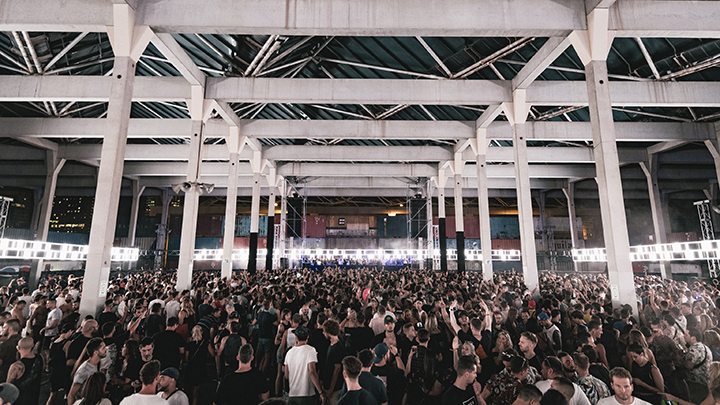 Meanwhile, the Generator stage was full to the flag waiting for one of the most anticipated live performances, the Berlin trio Fjaak. The young Germans are one of the revelation artists of this year and have been doing sold outs all over the world. It is not surprising when you see them live, with a very energetic live performance they delivered to the audience throughout the set.

Back on the Frequency stage, we were able to enjoy the duo Tuff City Kids, formed by Gerd Janson and Phillip Lauer, who did a live set of House music with modular synthesizers, drum machines and effects. Due to the last-minute cancellation of Eclair Fifi after missing her flight, Abu Sou and Pau Roca made us enjoy what was one of the best Dj sets of the festival, this time in a b2b format. It is easy to see when two DJs know and understand each other well, and this was undoubtedly one of those cases. In addition to seeing them super comfortable in the booth, enjoying a very dedicated audience, they played a very varied set full of Disco, Funk and House bangers. 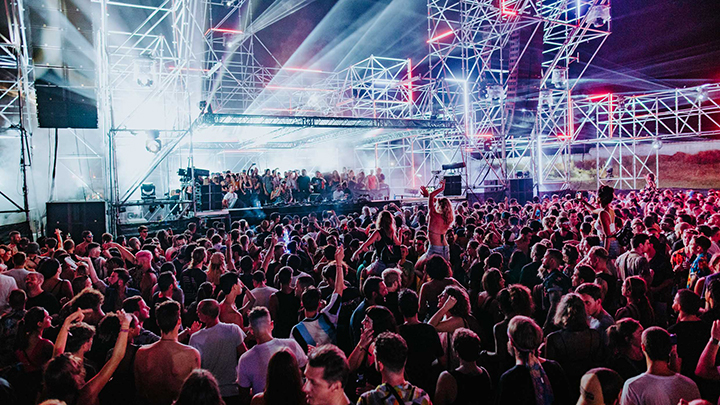 Infected by the good atmosphere that was felt in that scenario, we stayed until the end to enjoy the two back to back that closed the Frequency stage. After that, we enjoyed the set from Antal and Palms Trax, a set for ‘connaisseurs’ from beginning to end, full of disco pearls and tracks of dancefloor housey beats, with which the founder of Rush Hour and the Londoner kept the vibe very high.

To close the stage, we had another couple who did not need presentations: Ben UFO & Job Jobse. Ben UFO, co-founder of Hessle Audio has been placed in the dome of non-producer DJs who, along with Jackmaster and Oneman, have managed to build a reputation for their musical knowledge as a selector and not for their own productions, as it usually works. Together with the Dutch DJ, resident of the famous Amsterdam club ‘De School’ and producer of the ‘Innervisions ‘ record label, they performed a b2b for the record, with a dizzying musical selection and impeccable technique. 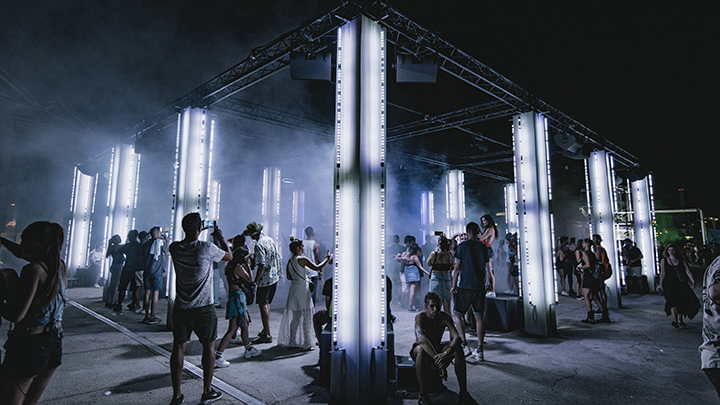 For those of us who continued with the party in the Sala Apolo, where this time we could see an Eclair Fifi in a state of grace, DJing hand in hand with ISAbella after Pau Roca’s set, the day of Saturday started a little later and relaxed than the previous one.

Despite this, we gathered forces to land in the Parc del Forum and see the end of the set of national DJ and producer JMII. From the Space Disco to Funk of the producer from Hivern Discs, we went to see the live performance of Fatima Yamaha. For those who have not had the opportunity to see it live, the Dutch producer is quite a show on stage, both in terms of music and attitude. Totally delivered to the public and enjoying it better than anyone else, Fatima Yamaha delighted us with a live set full of songs from his latest release, the EP ‘Araya’, as well as some of his best-known hits, such as ‘Love Invaders’.

After him, as the night was falling, we went to see Honey Dijon, one of the most anticipated DJs of the event, for the charm and grace that surrounds this woman. Her set full of disco house music classics of the 80-90 as ‘I’m Every Woman’ by Chaka Khan, kept a lively and lively atmosphere on the dance floor of the Generator stage. 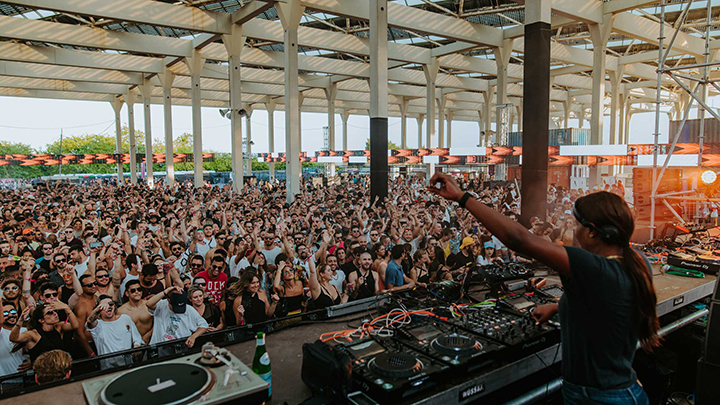 With the fall of the night, we came to see the live show of Fort Romeu & Pional on the Frequency stage. We really liked the fact that the festival put on several occasions DJs with this format that, despite their obvious similarities, can offer a speech that makes them leave each one of their comfort zones, as these artists mentioned in a recent interview for a local media. His session was a mix of refreshing House and New Disco, which gave entrance to the last night of the festival. From one end to another, we went to see part of Amelie Lens‘ set, which this year repeated in the DGTL line up, after its success in the last edition. The French DJ is in a moment of grace, having climbed to the top within the hardest and most industrial Techno circuit. No wonder she could not fit a pin on the track, after seeing the sold out she did just a few months ago in the Razzmatazz room in Barcelona.

Again, we totally changed the musical record to see one of the artists who, apparently, less hit in the line up this year. The DJ and producer from Leeds Nightmares On Wax is well known for his love of Hip Hop, as well as his broad career related to the genre. With countless releases on the Warp label, the British surprised us with a set full of Funk and House that stood out among the most techno and blunt live shows of that time. 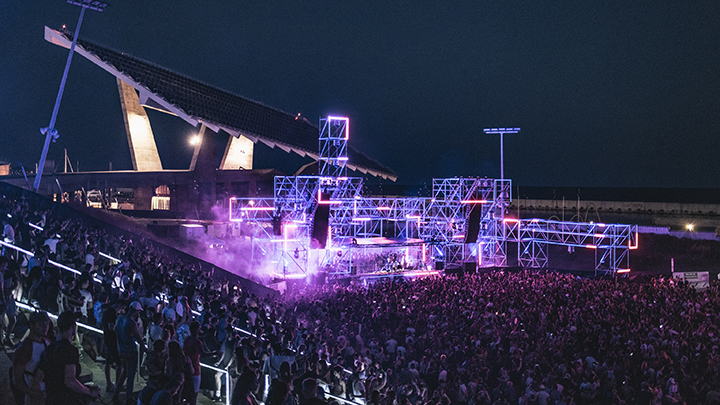 Without going any further, the renowned national producer Oscar Mulero had already taken a run and had the stage full and the audience delivered when we got to see him. With his technical characteristic at the time of mixing and his dark and industrial sounds, the Madrilenian did not keep an ace up his sleeve in one of the last sets of the festival. 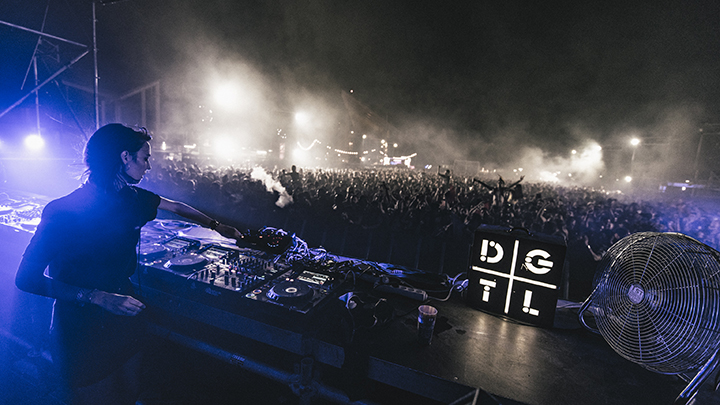 With the head like a drum, we went to see our last live show of the night, with Motor City Drum Ensemble on the 1’s and 2’s, again on the Frequency stage. As we already mentioned, the Frequency stage was our favourite stage without a doubt, mainly because it accommodated a greater musical variety, with easier listening styles and not so much hard floor techy music. And it is very appreciated that, in a festival dedicated mainly to Techno, there is occasionally a refreshing balm for the ears that is not a rhythmic pattern directed by dark drums and industrial sounds.