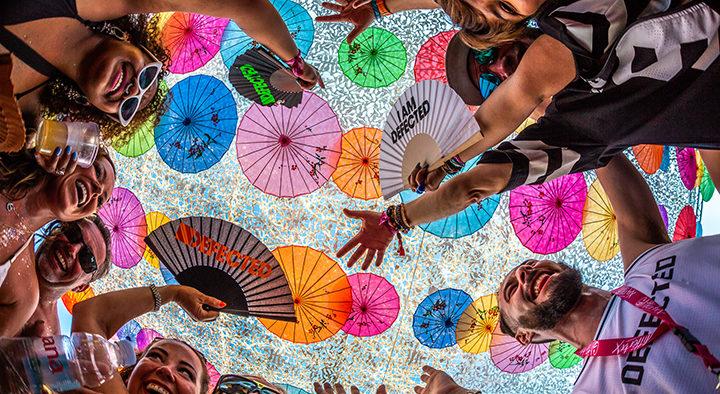 Anyone that’s been to a festival that’s more than 2 or 3 days will know it can be a struggle to catch all of the artists you aim to see. Even if you have a pre-plan, that quickly goes out the window, especially with a line up as killer as Defected Croatia. I was returning for the second time to Defected Croatia arriving a day early to settle in only to get a WhatsApp message from the Defected group announcing a pre-party on the beach from 8-12 with Defected A&R managers Andy Daniell & Melvo Baptiste…as if 6 days and nights wasn’t enough! The spontaneous beach set was absolutely banging attracting around 500 early birds radio DJ Melvo Baptiste kept having to remind us all that we still have 6 days to go and pacing ourselves is absolutely essential, Ha! Sounds of Jon Cutler – ‘It’s yours’ (Joey Negro remix) & Purple Disco Machine – ‘Dished'(male stripper) set a good foundation for the 6 days to come.

Officially day 1 and Todd Terry kicked off the Olive Grove stage with block party beats, a bit of disco & 90s hip hop – Nice to see such a great response to old school rap from a crowd of house heads. Heading over to the main stage Mat.Joe had done a stellar job of creating an energetic crowd prior to Claptone’s infamous mask & top hat emerging. 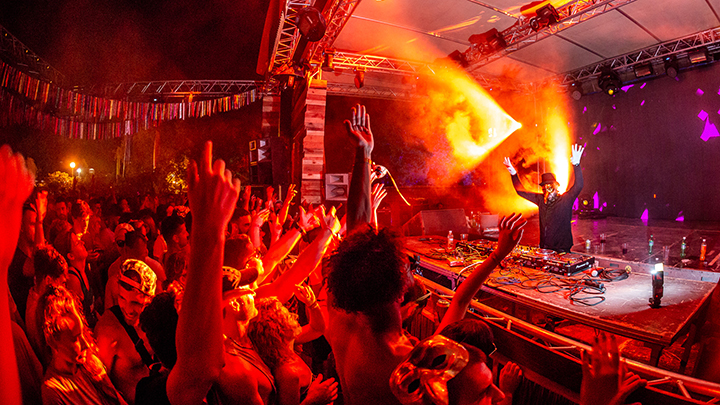 Big build-ups and dirty drops were on the agenda, Fisher – ‘Losing it’ & Claptone’s remix of George Kranz ‘Din Daa Daa’ we’re a couple of favourites. Basement Jaxx took over with a DJ set to throw us back to some of the ultimate classics of all time, mixing in his own ‘Do your thing’ & ‘Where’s your head at’ had the crowd uplifted and vibrant. Head honcho Simon Dunmore took to the stage to give praise to legendary Basement Jaxx & take over the controller with Sam Divine until the sun came up. As opposed to the debut year of Defected Croatia the main stage now stayed open till 6am for the first and last days of the festival which I thought was an absolute treat!

Day 2 aka ‘Flamingo Friday’s’ saw the beach stage taken over by Glitterbox with the likes of John Morales, The Shapeshifters (with Teni Tinks) & Todd Terry. It was bouncing with two steppers belting out vocals alongside the seafront covered in Glitterbox stamps and inflatable flamingos – this truly felt like a Glitterbox party. Absolute highlight tracks would have to be Whitney Houston – ‘I’m Every Woman’, Masters At Work – ‘To Be In Love’ & Aly-Us – ‘Follow Me’ (club mix). Purely through the reaction from the crowd to some timeless classics, it certainly felt like house heaven. 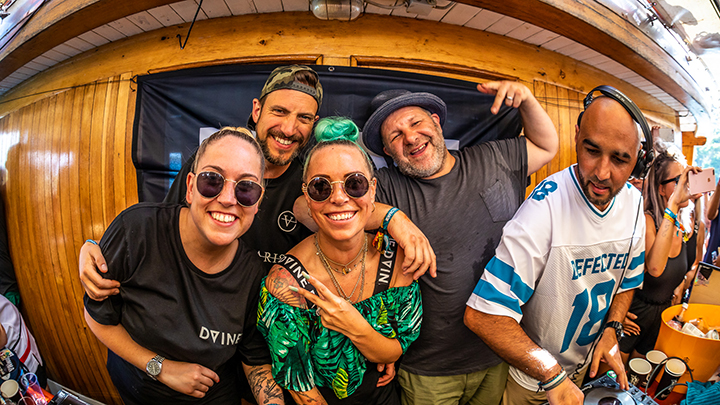 As CamelPhats flight was delayed, the main stage got pushed for an extra couple of hours which allowed Radio 1 DJ Monki & Defected resident Franky Rizardo an extra half hour or so each to play from which I heard no complaints! Hard-hitting house tracks gave little time for a breather on the dance floor with Franky blasting one of his biggest and best ‘Same Man’. CamelPhats recent boom in popularity through their hit ‘Cola’ with Elderbrook fools some into thinking they’re new to this. CamelPhat have been around for over 10 years and it really showed in their set, they drew a big crowd and delivered some dirty house bangers, of course, their new one ‘Dopamine Machine’ was heard and there was no other way to close their set than with the global favourite ‘Cola’. 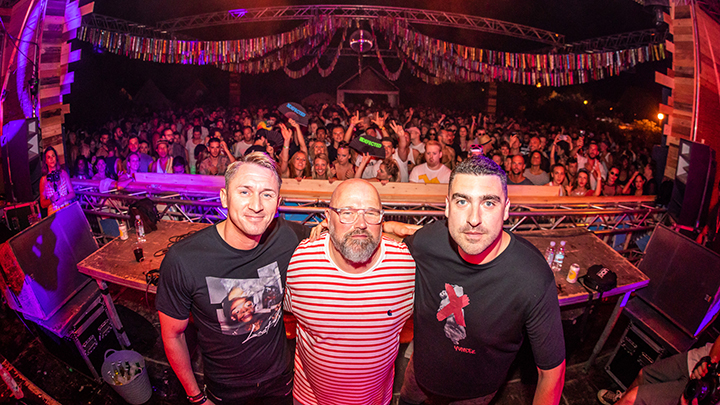 Day 3, Halfway through and praise to Wez Saunders opening garage sessions at the Olive Grove & Sam Divine going b2b with her husband DJ Hatcha while I floated on a donut. Can’t go wrong with a bit of Sweet Female Attitude – ‘I’ll Bring You Flowers’ or Artful Dodger- ‘Moving Too Fast’. The energy in the b2b set was fire with Hatcha staying true to his roots and even throwing in a cheeky bit of drum n bass!

Low Steppa drew me from floating around the beach stage with a filthy bassline dominating the festival grounds. I think it’s important to say that even though Defected host 3 stages and 3000 house heads across 6 days the stages are constantly busy without feeling overcrowded, there is always room to dance and if you wanna get right up to the front of the stage it’s not an epic battle, the quality of sound is also so good I felt more than comfy being around the edges of any stage. Amine Edge & Dance came on to play and absolutely shut down the main stage with their new track with Clyde P – ‘Dancin’ and kept the vibe just as banging throughout, we were left thirsty for more so off to the Barbarellas we went to catch them play again. 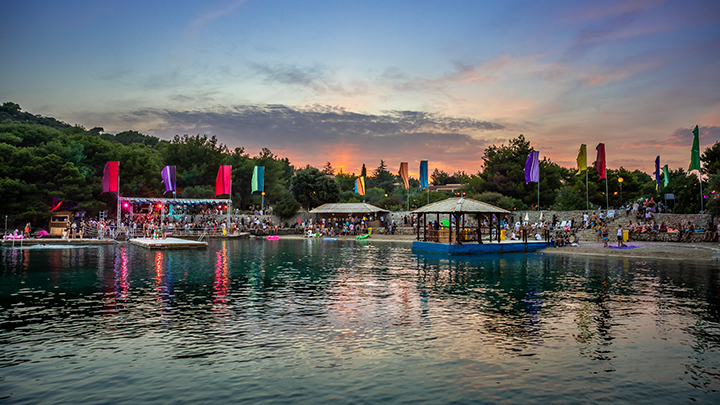 Day 4 and arriving around 1pm the site was a little empty, everyone clearly feeling it, lucky for us Defected had a very special guest Peggy Gou who absolutely rammed the beach stage! Dropping 2000 and One – ‘Spanish Fly’ and her remix of Shakedowns – ‘At Night’, safe to say we were not disappointed to have got up early for her set.

Dimitri From Paris took to the beach stage to rock some dirty disco house and warm us up for Masters At Work who were nothing short of incredible. Anyone who has seen Kenny Dope or Lil Louie Vega play before will know the kind of energy they have and together behind the decks it’s always something special, they closed out the main stage with a full dance floor till the lights came on, what a day.

Day 5 and my favourite of all days. Energy levels were low, everyone was off to a slow start, luckily block party beats on the beach stage were keeping us coherent, but the real treats were packed in at main stage: Andre Hommen opening up the with sounds of The Martinez Brothers- ‘H 2 Da Izzo’ and Mat.Joe’s – ‘Love Stream’ got feet stomping again. Josh Butler soon took over with one of my favourites ‘Be Somebody’. The energy was back, the air was filled with love and disgusted bass faces, gwan Mr Butler! 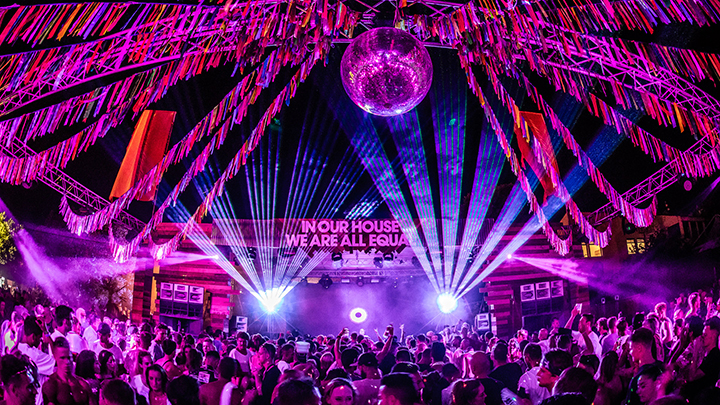 Next up was Honey Dijon, not a minute to take a breath! It was the kinda set where you need to nip off to the toilet but just can’t as the beats are too banging. Big build-ups had us feeling like she was playing with us but the drops were well worth the wait, I think they turned the bass up for this one.

The man, the legend, Dennis Ferrer emerges to close out day 5, I love the energy this man has when playing! Always dancing and singing along to each and every track dropped. I’ve seen him play many times before, what separated this set from all others is the encore. Lights on applause all around quickly to be drowned out by a crowd acapella of his hit ‘Hey Hey’. Of course, he dropped the track and had Simon Dunmore & Sam Divine front row in with the crowd getting down too – what an atmosphere. But hold up… only one man can get a second encore – Dennis Ferrer. At this point, Simon gave him a nod and he dropped his remix of ‘Underground’ followed by ‘Fish Go Deep’ and ‘Mind Your Step’ while several of the Defected DJs climbed onto the back of the stage and danced with us, absolutely legendary. 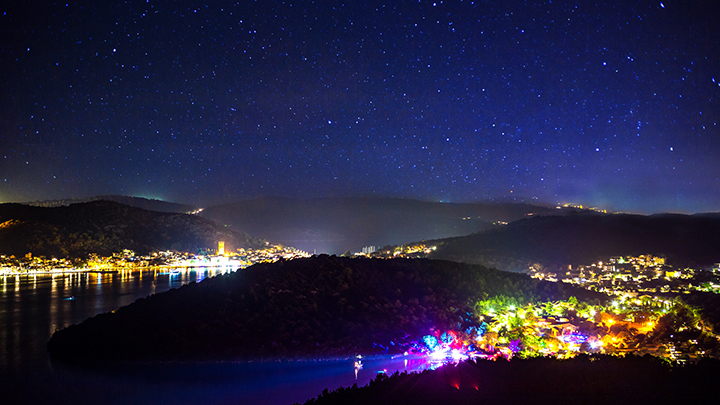 Day 6 and Defected you’ve been incredible, what better way to close out the last day than with, Horse Meat Disco & Purple Disco Machine on the beach stage bringing all of the disco classics that have built house music to what it is today, could definitely feel that we were ready to wind down till hitting the main stage and the likes of Sandy Rivera dropping ‘So good’. Sam Divine smashing out her rolling house set with a favourite Sweet Female Attitude- ‘I’ll Bring You Flowers’ remix & her banger with Curtis Gabriel – ‘Confessions’ and house royalty Roger Sanchez remixing Underworld -‘Born Slippy’ was a perfect end to an epic week.

Massive respect and love to the Defected team for setting new par levels with how to organise and run a festival, I returned for the second time for a reason – It’s unmatched, for quality of sound, music, artists, location and crowd you absolutely nailed it again. Safe to say I’ll be seeing you next year for another week of house hedonism heaven.