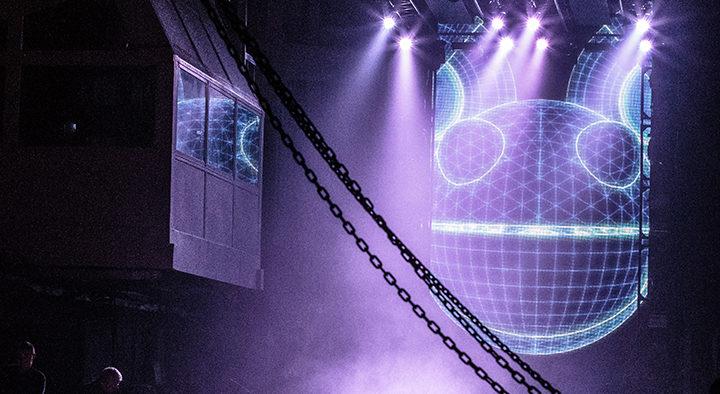 It was back in May of this year when we first heard the whispers of a one-off show at Printworks, headlined by none other than deadmau5 (aka Canadian producer and DJ Joel Zimmerman). The show promised to be an audio-visual spectacular, with ground-breaking music from an individual who has truly mastered the art of composition and production.

Joel and his label ‘mau5trap’ are responsible for some of the most prestigious and ingenious productions within modern day electron music. Having had singles, and albums that have topped charts around the globe, deadmau5 is now quite arguably one of the notorious electronic artists on the planet. Headlining countless festivals and club nights across the world, Joel has also become renowned for captivating his audience and plunging them into a musical journey like no other. With visuals playing a key part in his performances, and a venue as unique as Printworks scheduled as the location for the event, to say I was feeling excited is a definite understatement. 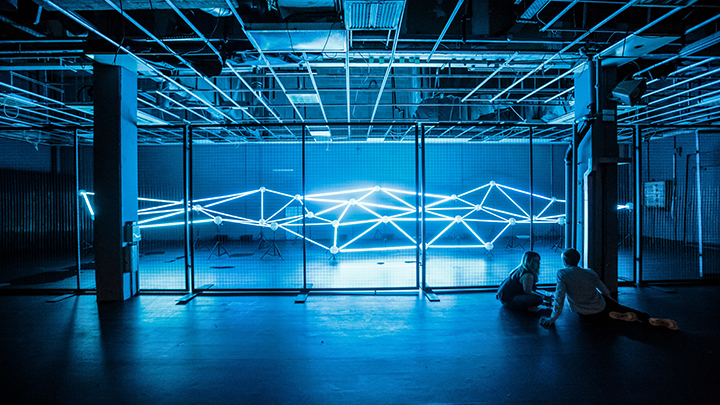 In this day and age, Printworks is truly a unique venue, with a substantial reputation for holding some of the most innovative events currently taking place within London. It is comprised of six vast event spaces, all arranged over numerous levels with a maze of corridors and rooms. Original machinery and industrial features are also retained throughout the establishment and act as a reminder that the venue used to once be a fully functioning printing press. Tickets for the event sold out far in advance and it was clear that once more, Printworks would be the location for a particularly special evening.

On the night of Friday 16th November, we arrived at Printworks at about 9pm, and it was clear from the number of people that had turned up, everyone else also knew that this deadmau5’s first indoor show in the capital for 4 years! We quickly made our way through security, which was extremely smooth and well organised, before strolling through into the first bar area. After loading up with some much-needed drinks, we headed straight into the action. Walking up the stairs and coming out into the cavernous main room is truly breathtaking. For those of you who haven’t yet been lucky enough to yet attend an event at Printworks, the sheer size of the place is hard to comprehend – 5000 capacity! With the crowd laid out before us, the speakers rumbling through the foundations, and with the night still young, we head forward into the madness. 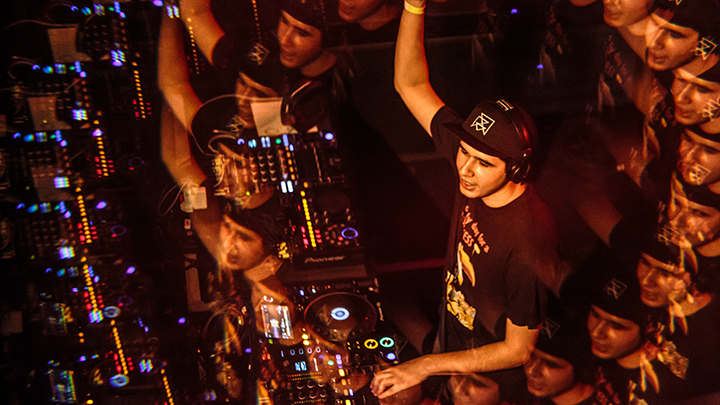 The first supporting act we witnessed that night was Monstergetdown (aka Eliazar Torres). Deadmau5 actually released a new album a few days before this event took place, titled ‘mau5ville: Level 2’. The release featured three new tracks from the label boss, a collaboration with Mr. Bill, a remix by Chris Lorenzo, and new original music from Gallya and Monstergetdown. Born and raised in California, Eliazar has had support most recently from the likes of Richie Hawtin and Pete Tong. Over the past few years, this young artist has gone from strength to strength and he continues to tour with Deadmau5 in both the US and Europe. With this in mind, I was particularly keen to hear what sounds would feature within Monstergetdown’s performance. Shifting between genres seamlessly, the set compromised of some particularly groovy tech, blended in flawlessly with some truly atmospheric house – thoroughly enjoyable! A particular highlight for me was Kyle Watson’s remix of ‘Prophecy’ by Tchami and Malaa.

Next on the bill was fellow LA producer Rinzen. In March 2017, Rinzen fulfilled a long-time dream, officially joining Mau5trap with his debut original, ‘Renegade.’ Over his career, he has become increasingly well known for his unique ability to blend cinematic tropes with forward-thinking house and techno production. He then followed up with his debut EP, Forbidden City, again on mau5trap, in October 2017. The three-track concept EP was applauded by Billboard, who hailed it as “a sonic exploration of human depth.” More recently, he’s been selected for Mixmag’s coveted Impact series. He opened his set with ‘Muyu’ by Tom Demac, Rinzen and went on to prove exactly why he is such a highly regarded artist. The talent and skill behind his set were mesmerising and I was truly transfixed from start to finish. Previously I had not had the chance to come across much of Rinzen’s work, but having now experienced a taste of his performance capabilities, I will definitely be keeping track of his imminent progress through the industry. 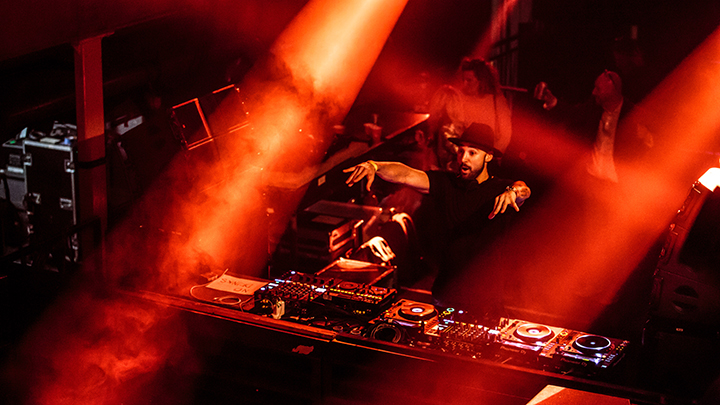 The final supporting act that night was OFFAIAH. Originally from Argentina, OFFAIAH received support on his debut single back in 2016 from the likes of Annie Mac and Danny Howard. Since then he has gone from strength to strength producing some particularly clever productions and facilitating the use of some especially playful hooks. Some particular highlights from his set for me were two of his originals titled ‘Private Show’ and ‘Work It Out’. Both tracks follow a particularly techy style and are the result of some of his most recent work.

Unfortunately, we had to cut the OFFAIAH’s set slightly short in order to resupply for the final two hours of the evening. Drinks needed to be restocked and a crowd position would then need to be renegotiated. Heading back out into the main room we managed to nestle ourselves into the main body of the crowd, making sure that we had a good view of the action that was about to take place. Complete darkness fell over the room. 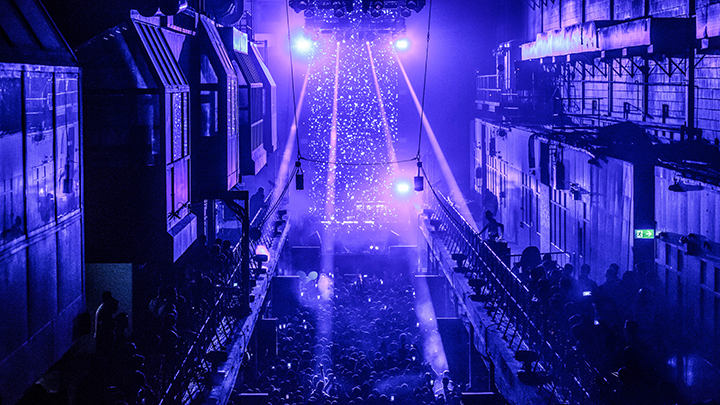 From the darkness, a red laser visual started to create a large loading pattern on the rectangular screen, which stretches between the decks and the ceiling. This marked the beginning of one of the craziest visual displays I’ve seen throughout this year. One can’t help wondering if deadmau5 and Eric Prydz perhaps share tips and techniques around one another’s visual effects. Their styles are so incredibly similar, but also extremely unique at the same time. Regardless, they both completely captivate their audiences with their immersive effects in order to create the perfect musical journey.

The opening half hour of Joel’s set was inspired by his alias ‘Testpilot’. Blending and sculpting some thumping techno through the darkness, the music could not have been better suited to the venue. Testpilot is Joel’s step away from the growing expectations of deadmau5 and into his ultrasonic alter-ego. Testpilot first premiered in a legendary back-to-back performance with fellow Canadian producer Richie Hawtin at South by Southwest in 2013. Since then he has used the alias to pop up at a few different locations over the years, but it is only within the last year that the frequency of these occasions has started to increase. I would say that this is probably one of my favourite styles that Joel currently produces, and that initial half hour was absolutely mind-blowing. 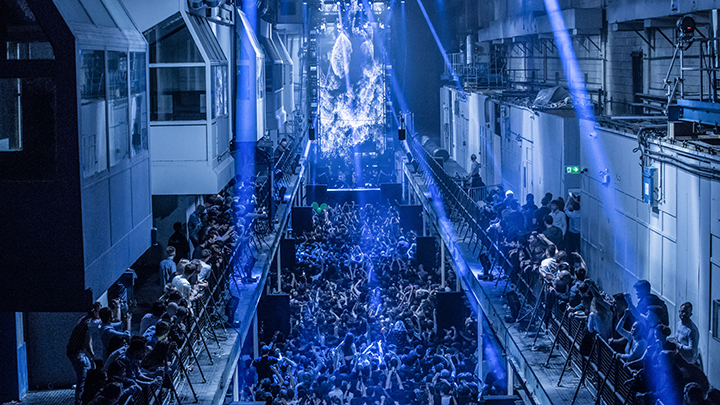 As we reached the half-hour mark, the mood changed and we saw the introduction of some of deadmau5’s true classics. Accompanied by some extremely animated visuals, the Mau5-head went on, the big bright eyes lit up, Joel’s hand raised up towards the ceiling, and the original deadmau5 had finally arrived! Smashing through some of his biggest hits including the likes of ‘Maths’, ‘Sometimes Things Get, Whatever’, ‘Raise Your Weapon’, and of course ‘Ghosts ‘N’ Stuff’, you could look around and see that everyone was truly transfixed by what they were witnessing, and the room was aglow with countless smiles. 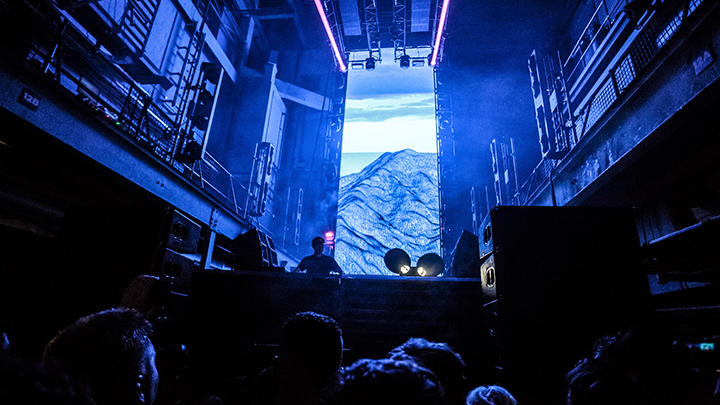 The biggest reactions of the night went to a number of key tracks. ‘Monophobia’ which acted as Joel’s second collaboration with Rob Swire from Pendulum, was definitely a crowd pleaser, with ‘Strobe’ and ‘The Veldt’ also playing a crucial role in the evening’s structure. As the show started to draw to a close, Joel removed his helmet again and could be seen on stage standing above the decks, cigarette in hand, surveying the ecstatic crowd that was laid out before him. It was at this point in the night that I realised a few things. Firstly, this had been one of my favourite events that I have attended over the past 12 months. Secondly, the amount of effort and time that it must take both Joel and his team to create the display and sensations that they do is astounding. It raises the bar massively in regards to live performance and I believe sets a benchmark that many will struggle to even come close to. My final realisation was that the event had run incredibly smoothly and was probably the first event in years that I’ve attended where I haven’t witnessed a hint of trouble. Maybe that was down to the crowd that attended, maybe it was down to Lock N Load being extremely well organised and run as a promotion company, or maybe it was just the magic that Joel brought to London that night. I guess we will never know. A huge thank you to all who were involved. It was truly an experience.

Reviewed: day of the deadmau5