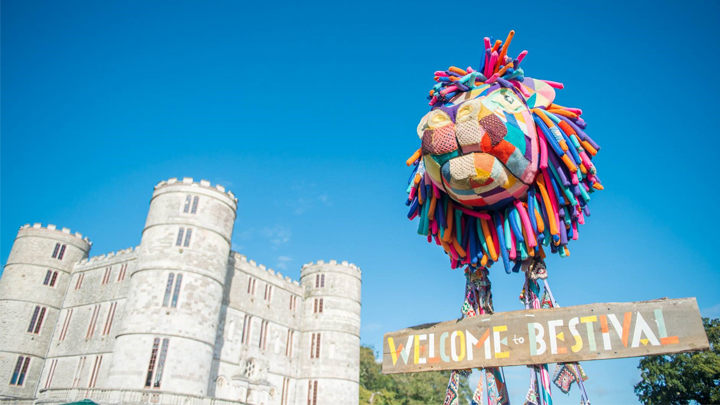 This year’s Bestival, its 14th outing, saw the festival in a new location moving from the Isle of Wight to the Lulworth Estate in Dorset just outside of Bournemouth. This made getting to the festival a hell of a lot easier than the usual full day slog it takes to get over to the site on the Isle of Wight. Before we set out the weather forecast for the weekend had been somewhat ominous but in true festival spirit, we thought nothing of it. Fast forward four hours and I’m very glad that I packed my wellies.

Having never been to Bestival before I was reliably informed by nearly everyone that I asked, that Bestival had so much going on it was impossible not to enjoy yourself. Exploring the festival arena, it wasn’t hard to see why with many themed stages often uniquely decorated inside, not your standard festival tent. One of the standout stages was the Temple, home to some of the big hitters of electronic music over the weekend. Thursday night at the Temple began with radio DJ and all-round cool cat Annie Mac wrestling the reins off of High Contrast for Radio 1’s Bestival takeover. The full effect of the Temple’s design, light production and the world’s biggest confetti cannon being revealed as the sun set. 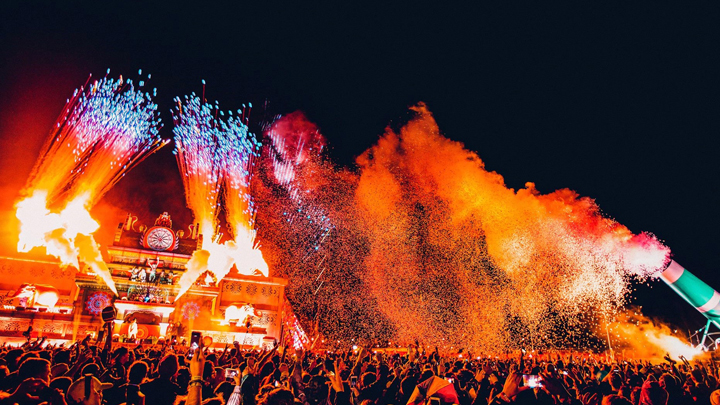 Another stage synonymous with Bestival is HMS Bestival, and many revellers joined in with the nautical theme throughout the festival. Friday saw the party ship being taken over by some garage legends with Oxide & Neutrino and Matt Jam Lamont amongst others on the bill. We dropped in for Oxide & Neutrino who dropped old school anthems like ‘Heartbroken’ by T2, ‘Wile Out’ by DJ Zinc and ‘MC DT’ from DJ Pied Piper that had the crowd waving their gunfingahs aloft. Back over at the Temple, rising star Peggy Gou is thrilling the audience with her unique blend of house and techno as the sun dips beyond the horizon. As the night wears on we take in Preditah at the Bollywood stage before heading over to the Box for Bjarki’s early morning set. Five minutes in and Bjarki has the crowd bewitched with his industrial style of techno, then the music cuts. Another five minutes is spent as staff busy themselves on the stage trying to fix the problem. The bass swells out and the audience’s patience has been rewarded as Bjarki lays down a barrage of assorted bleeps and mechanical sounds whilst intense lights flicker behind the Icelandic producer. 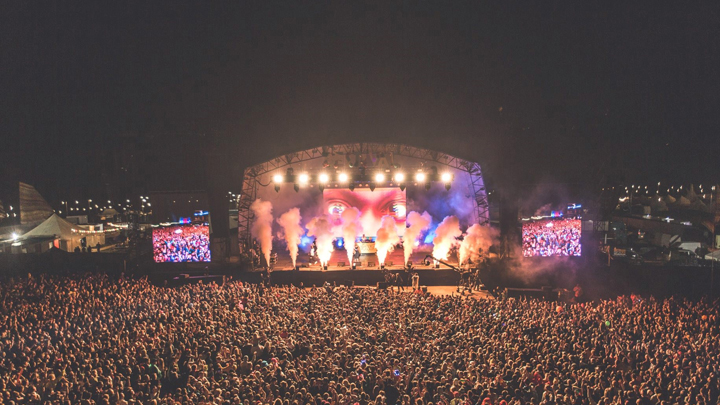 Roll on to Saturday and at the mid-point in the festival everyone is decidedly muddy and merry, after easing into the day with New York style hip-hop from Rejjie Snow, I turn my attention to the Temple for Patrick Topping. Undoubtedly one of the big stars of this summer, the Newcastle-born producer did not disappoint even bringing the sun out with him too just to top it off. A well-received highlight from his set was Johnny Dangerous’ 1992 classic ‘Club America’ with its memorable refrain “I’ll beat that bitch with a bat” that had everyone moving and grooving in their wellies. Later in the evening we returned to the Castle stage for Dizzee Rascal and A Tribe Called Quest, who performed their last ever show. Needless to say ATCQ rose to the occasion cementing their place in hip-hop history as one of the all-time greats.

For her second Bestival appearance Annie Mac did not disappoint on the Temple stage, but it was Melé who really wowed us. His high energy dance music pushed the crowd on into the night and a personal highlight for me was when Melé dropped ‘Space Cowboy (Classic Club Mix)’ by Jamiroquai. This David Morales remix really is a classic track and was a fantastic selection, nothing quite says Bestival like you belting Jamiroquai out at 2AM Sunday morning. 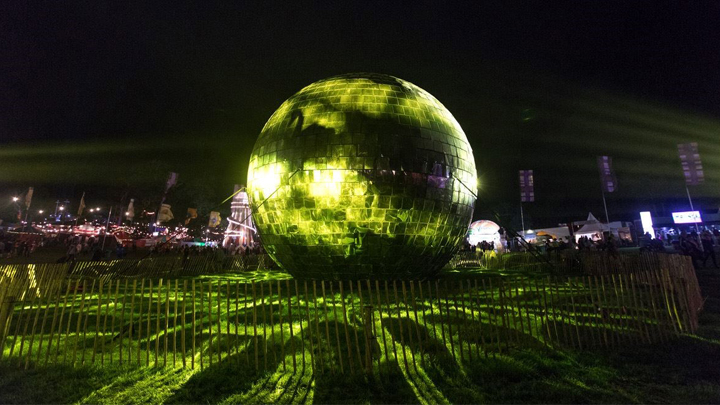 Sunday, the last day of the festival and possibly the biggest in terms of lineup. I’ve already missed so much because of set clashes and today was no different. We started off early at the Temple watching jungle legend Jumping Jack Frost shelling it down with The Ragga Twins MCing both putting in some of the best performances of the weekend. Frost plays 2009 Sub Focus hit ‘Timewarp’ to many cheers despite the rain and wind lashing it down. Over on the Bollywood stage Toddla T is bringing his carnival sounds out before we are told the arena has had to close and everyone has to be evacuated back to their tents due to high winds posing a health and safety risk. After safety has been restored to the site festivalgoers pour back into the arena, and we head to the main stage to catch Soulwax – the fleshed-out band from the Dewaele brothers behind 2ManyDJs. Equipped with the most analogue equipment I’ve ever seen on stage, three separate drummers and a bassist, Soulwax provided one of the best audio-visual experiences of my life, complete with a giant revolving silver head. 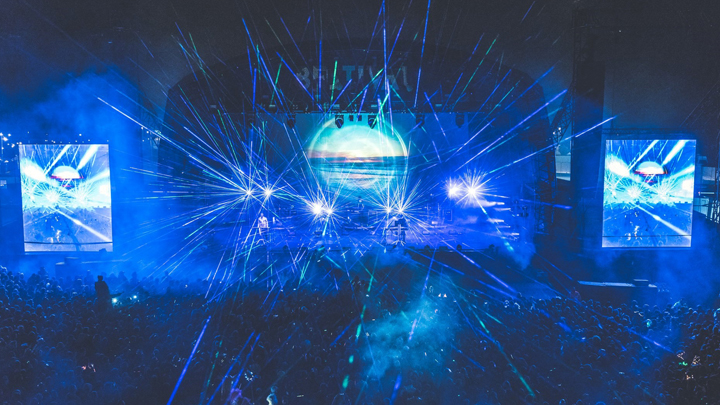 As the final evening drew in we headed back over to the Temple, where Andy C had brought his 25 years of RAM party to the stage culminating in a headline slot from the big man himself. Culture Shock is on stage as we drop in and are treated to ‘Timewarp’ for the second time today. Andy C takes to the decks and brings sub-heavy drum and bass to the Temple, ‘Tarantula’ by Pendulum provides the background for a hands-in-the-air moment as thousands get their skank on. Calyx & Teebee close the Temple out for the festival laying some newer dnb down for the remaining ravers. As all the stages begin to close, there is time for just one more act as we squelch our way down the muddy hill to see the legend DJ Yoda. His unique mixing and mashups leave no stone unturned as we hear everything from Pac Man and Tetris sound effects to Roots Manuva’s ‘Witness the Fitness’ and with that Bestival is over, and it’s quite easy to see why so many people call it the best festival. We can’t wait to see what they pull out for their 15th birthday celebrations next year.

Data Transmission would like to extend their condolences to the Michie family who sadly lost their daughter Louella in a tragic accident on Monday morning at Bestival. 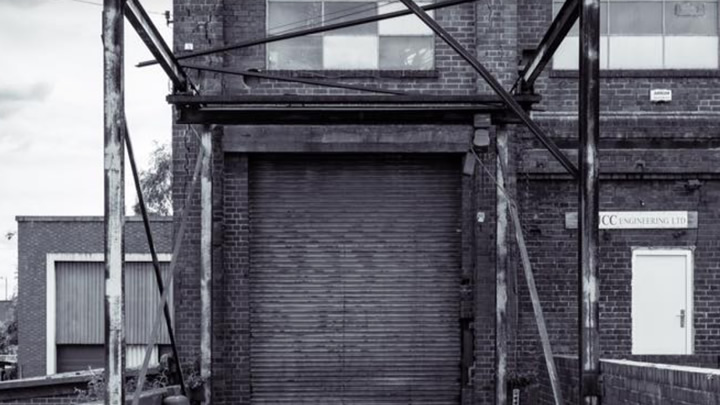