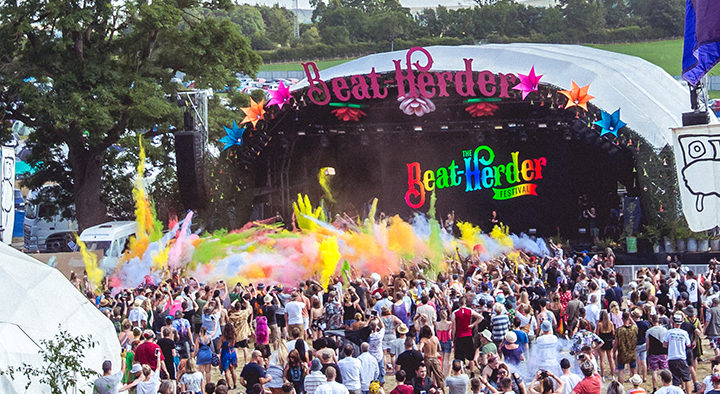 Every summer, Lancashire’s glorious South Ribble countryside transforms into the weirdest, the wildest and the most wonderful vibrant three-day party in the UK festival calendar; Beat-Herder.

Now in it’s twelfth year, the festival originated from the free party rave scene and still feels as exclusive and wayward as it’s secret parties from many moons ago yet now homes over 17 incredible music arenas, 14 bars, 40 plus stalls, fairground rides, a craft tent, a healing tent, children’s climbing frames…..the list goes on!

Having worked in the festival scene for the last 8 years, Beat-Herder was one of the very few festivals I hadn’t yet had the honour of attending. I had heard some amazing reviews over the years through the grapevine and to say I was ‘really excited’ about the adventures that lay ahead was an understatement! 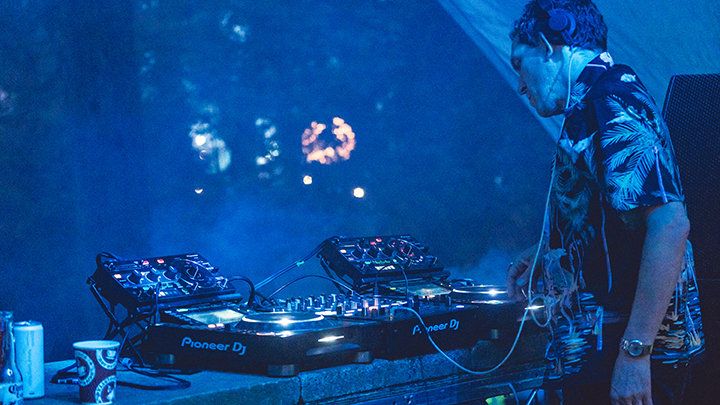 After an epic six-hour road-trip from our home-turf of Hertfordshire, my partner in crime for the weekend, DJ and music producer Mr Beatz, and I expected to be met by long entry queues followed by even longer wristband queues. However, entering the festival site was thankfully painless! No sooner had we received our press passes we were parking the car and pitching up our bell tent in crew camping, enjoying a well-deserved (and very large) gin and tonic and admiring the most picturesque scenes of the sun-drenched valley ahead with rolling hills as far as the eye could see. How lovely!

One strong cup of coffee later followed by perhaps another stiff beverage to get us in the party spirit, (would be rude not to!) we finally left camp to take a wander into the main festival site. 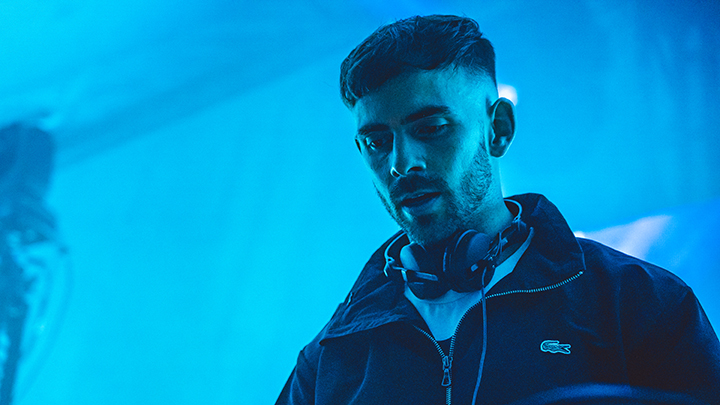 Throughout the entire weekend, we walked mouths agape, stumbling across the most incredible scenes. An underground tunnel, hidden in a phone box (which I refused to enter due to being claustrophobic!) a working tattoo parlour, boutique shops, concealed hangout areas and the most mouth-watering food stalls. 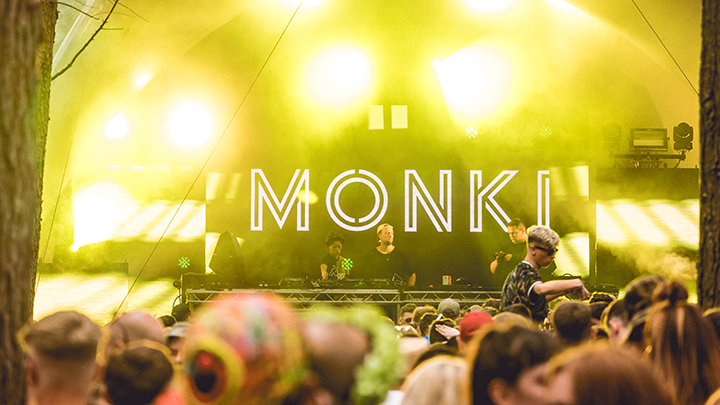 The Fortress, another monstrous music venue made out of corrugated iron is filled with all things breaks, beats and house that according to the organisers ‘reverberate through the dancing-compacted ground right up your spine!” We danced the night away to the most unbelievable line up of top DJ’s including Gemma Furbank, Phatworld, Erol Alkan, Ben Sims, Deekline, Ed Solo, Charla Green and Liohness. 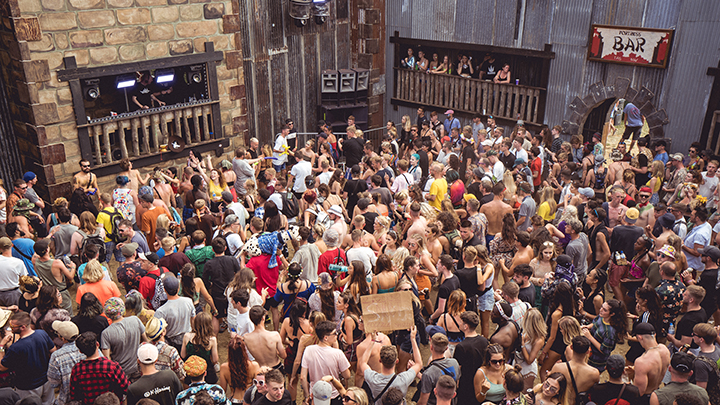 The Garage is a perfectly set small woodland venue filled with hyped up festival goer’s stomping on old, trashed cars to the funkiest of tunes played by DJ’s based from within a booth inside an old vintage banger. The vibe was utterly electric and you couldn’t help but grin from ear to ear and raise your hands to the sky to the most uplifting beats.

My personal favourite setting was The Snug. The festivals most intimate venue housing the likes of funk, soul, pop and dance. We managed to sneak backstage and hang out with friends The Chicken Brothers (the cheekiest Northern chaps you’ll ever meet!) Where’s North? Father Funk and Two Good. They all know how to party! 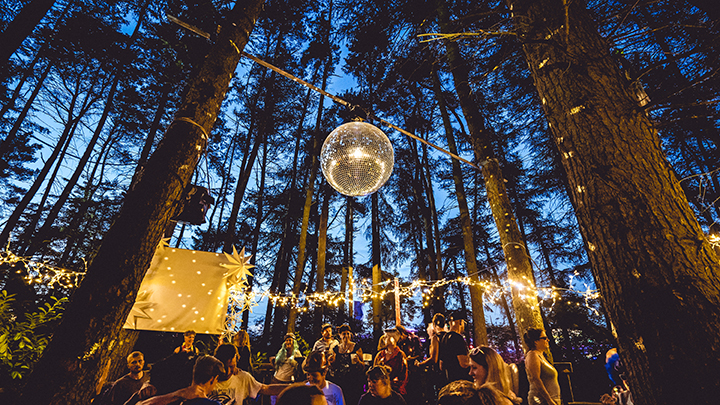 The highlight of the weekend was interviewing Friday night’s headliners, world-class DJ’s and electronic dance legends, Orbital. Brothers, Paul and Phil Hartnoll, (two of the friendliest and funniest chaps I’ve ever met!) have been both critically and commercially successful and known particularly for their element of improvisation during their live shows, a rarity among techno acts. They were initially influenced by early electro and punk rock however on asking which one decade of music would they chose to be eternally stuck in and what genre of music is currently most influential their answers were very different!

Paul: Style wise I’d chose the 1960’s. I’d revel in wearing both the smart suits of the Mods with the contrast of the bright flower suits of psychedelia. Music wise, my current influence is folk music, especially modern folk music led by female vocalists. Sunday afternoon, a glass of real ale, feet up and folk-tinged electronic!

Phil: If I were to time travel, go back in time, know what I know now then I’d go back to 1950’s and totally rinse it!

Another special moment was interviewing Utah Saints who have been heavily involved with Beat-Herder since 2007 when they started booking several DJ’s for the Toil Trees. Now, Tim and Jez host Saturday nights ‘cosmic theatre’ The Ring. Sticking to the theme of most influential decade and genre of music it became clear the 70’s stood out as the true musical influence for them. According to Jez, one half of Utah Saints, the 1970’s funk and disco movements were the catalysts of modern dance music. “The whole disco club scene is completely bonkers. The energy of that and the Sex Pistols ‘God Save the Queen’ is the reason why we got involved with raves. People with soul come through. Everyone connects.” 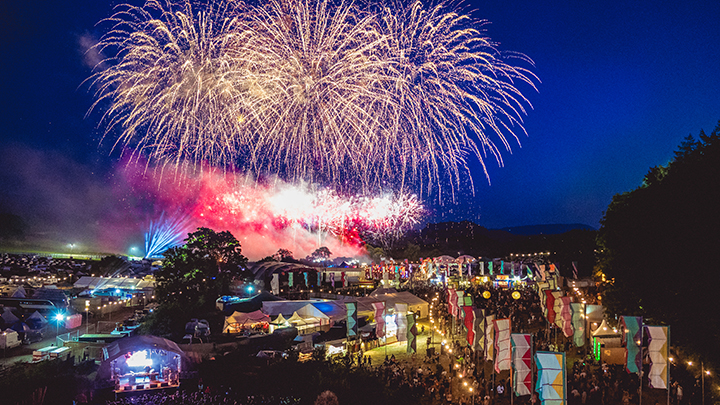 Beat-Herder fashioned an immersive world full of mesmeric and captivating imaginative perceptions. The attention to detail and creativity everywhere we turned was endless and made even more vibrant by the impressive fancy dress costumes following the theme of the letter ‘E.’ Festival-goers did not disappoint with their extravagant attire including Egyptians, emoji’s, Beat-Herder ‘Express’ Airlines, Elvis, Sesame Streets Elmo, Elton John, Edward Scissorhands, elves, emu’s, elephants and more!
A pure feast for the eyes, Beat-Herder is intensely bold bringing in an attractive and barmy crowd of party goers.

What makes Beat-Herder so special? The hedonism? The friendly vibes? The creativity? The barminess? Whatever it is, it’s not one to miss. 2019….here we come!