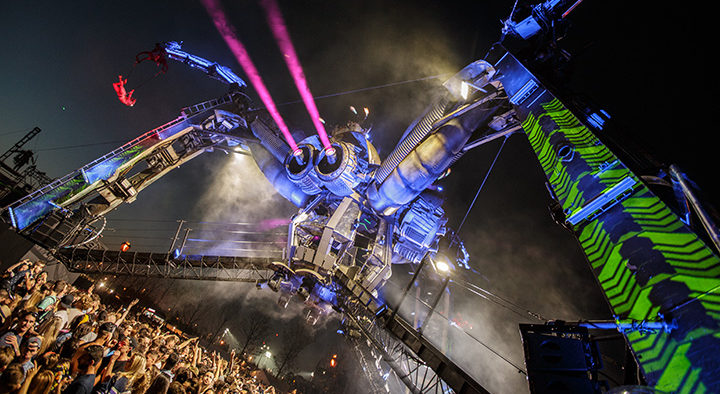 2018 is the year the raving phenomenon Arcadia Spectacular celebrates their 10th Anniversary and what a better way to party than to hold their very own two-day May Bank Holiday Weekend festival, at the Queen Elizabeth Olympic Park, London. Featuring the likes of Leftfield, Groove Armada, Sven Vath, Paul Woolford, Eats Everything and more; the festival in conjunction with LWE truly kicked off the summer with a big pyrotechnic bang, sending thunderous shockwaves across the nation’s capital!

Infamous for their annual enticing appearance at Glastonbury Festival, Arcadia Spectacular is the brainchild of old school friends engineer Bertie Cole and scrap metal sculptor Pip Rush Jansen. The troupe’s installations are built from repurposed military hardware, that explores the relationship between technology and human intent; anchored in themes of transformation and showcasing what can be done with the world’s waste. 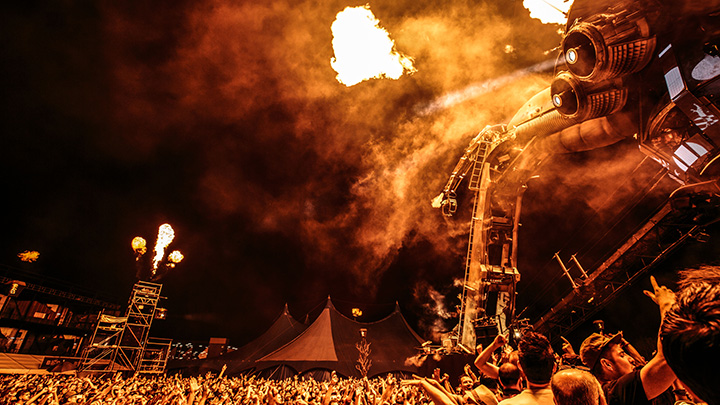 We’d been absorbed in Arcadia’s hypnotic shows many times at Glastonbury Festival over the years and were incredibly excited to see if the same energy could be recreated outside of that crazy Glastonbury bubble.

We arrived at around 2pm and were greeted at the gates by friendly security and front of house staff. The bag checks and ticketing queues went down super quickly and within minutes we were inside the main gates heading straight to the food traders, looking for some tasty grub to line our stomachs for a day of partying ahead! The food offerings were delicious and not too overly priced. We opted for a tasty pizza to share, scoffed it down within seconds then made a bee-line to the backstage bar in search of some thirst quenching rum and ginger!

After knocking back our drinks (followed by a second round!) we rolled into The Reactor, Arcadia’s breath-taking new indoor arena; an experimental sensory laboratory, showcasing a three-dimensional geometric matrix laser show, with alien creatures shooting green strobes out of their eyes flying above the central DJ booth that looked like an alien command centre, giving you the feeling you were inside a futuristic industrial venue in the middle of the night. With its seriously heavy sound system, creative eye candy from twisted visuals, the intense 360 environment left thousands of revellers completely spellbound and mesmerised; as only to be expected at an Arcadia show! 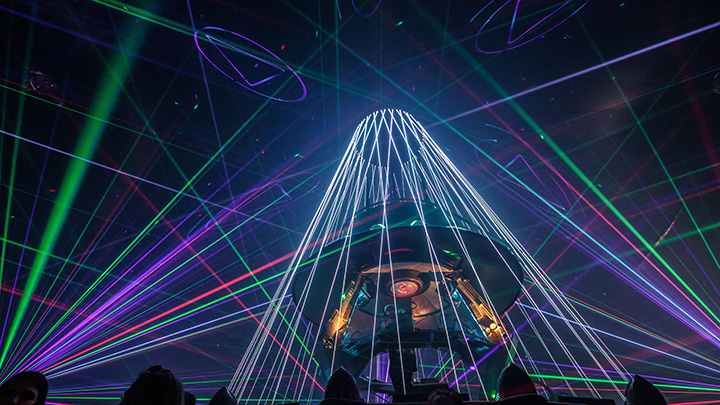 Desperate for some fresh air after being immersed in the mouthwatering sounds of The Reactor, we headed outside and were instantly captivated in the recognisable uplifting-unique-tribal-techy-acid rhythms of one of the planet’s best-loved and biggest selling dance acts, Groove Armada. With the sun shining over the backdrop of the London skyline, playing one banger after the other, their notorious beats were literally getting the crowds ‘superstyling.’

After their set, it was hard to choose between the slick house vibes at the Spider with Dusky doing their thing or the final set on the Bug Stage, with its superbly punchy and crisp sound system off the back of Mad Max style insect truck. We chose Tristan Ingram at the Bug Stage, who had the crowds bouncing with hands in the air summer house vibes.

As the sun started to lower and the skies changed colour, Arcadia Spectacular revealed their collaboration with Aboriginal tribe the Yallor Keeninyara; a performance uniting of one of the world’s most ancient ceremonies ‘Wadjuk Noongar’ with one of the most futuristic creations, the Spider. Dressed in tribal attire and body paint, their ancestral chants and dance resulted in a really powerful, moving and magical experience. 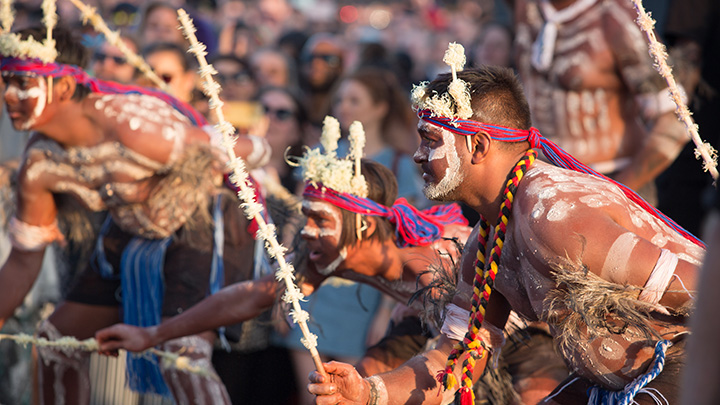 Off we marched with haste back into the Reactor to catch Eats Everything part way through his set. Dan caused his usual mayhem on the dance floor with his unique bumpy vibes, blistering build ups and dropping the odd classic you’d least expect; skipping through lots of super tasty house and techno. The energy from the arena was absolutely insane! 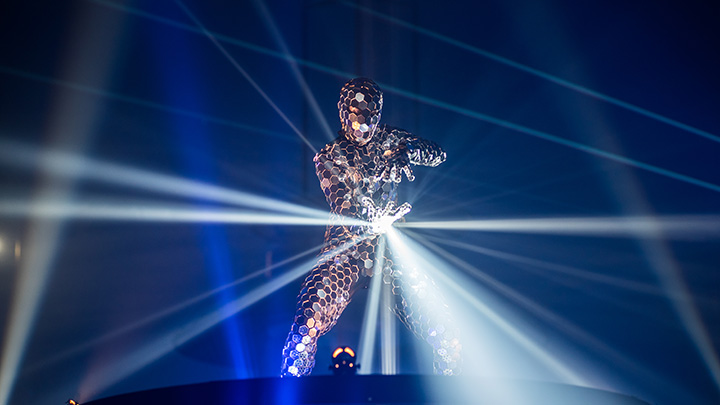 As darkness fell, crowds made their way to the Spider. Energy levels were now at boiling point as everyone waited in anticipation for the day’s highlight – Arcadia’s notorious Metamorphosis show! An immersive story of aliens landing on Earth, aerial performances, members of the public being kidnapped from the crowds dancing below, spiders the size of cars crawling overhead, Lords of Lightening shooting volts of cackling electricity over their bodies, LED-glowing alien-creatures and flame balls and pyrotechnics lighting up the nights sky. A truly captivating experience that left most revellers speechless from its sheer awesomeness!

Rather parched, we headed straight to the backstage bar again to enjoy refreshing cocktails and rest our dancing shoes for a while. Set up around beautifully lit tree’s and bamboo-lined fencing, the peaceful backstage garden had a chilled, tranquil vibe. Lots of artists and DJ’s had come to the event regardless of whether they were performing on that day and it was great seeing everyone together and on top form. We bumped into Dan aka Eats Everything who was grinning from ear to ear and still buzzing from his set and energy the crowd created dancing to his sick set. He had us in fits of laughter when he started sucking at my friend and fellow DJ, Mr Beatz, finger for no reason! Eats Everything literally does eat anything! 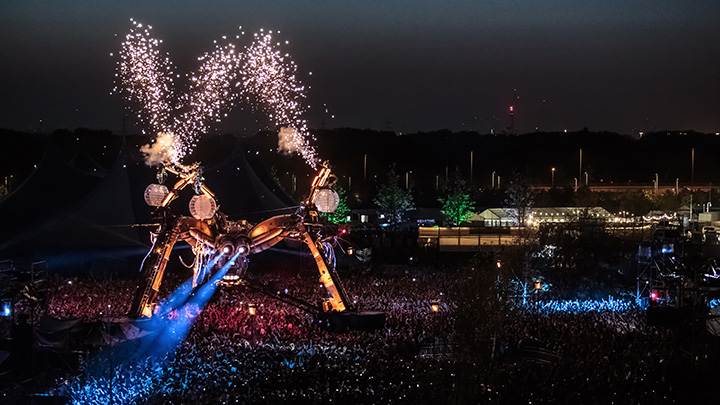 To close off a perfect day the legendary Leftfield performed a live set from the Spider, with band members scattered around on various small stages and the main booth. They glided into the set with crystal clear, bass-heavy, pumped up live versions of some of their best material that has spanned over two decades at the top of their game. Dropping the likes of ‘Not Forgotten’ with that mesmerising synth, unforgettable bassline and jungle sounds had the crowd cheering with sheer joy at the drop! Their unique sound is a mixture of so many different sounds amalgamated together, forming music that is so recognisable to them, with tracks heavily influenced from dub, reggae, house, techno breakbeats and various styles of vocal wizardry. They were the phenomenal ending to a remarkable event in the Nations capital.

Did Arcadia Spectacular and LWE recreate the same high-octane energy as they do from the fields of Glastonbury Festival? Without a doubt! They smashed it! Huge congratulations! Rumour has it they’ve another UK show lined up……who’s game?!

Tags:
Previous Article
Tom Bug returns to Blacksoul Music with ‘Burn The Motha’
Next Article
Work Out Tracks by Audiojack

Work Out Tracks by Audiojack
Shelley Dodds May 15, 2018