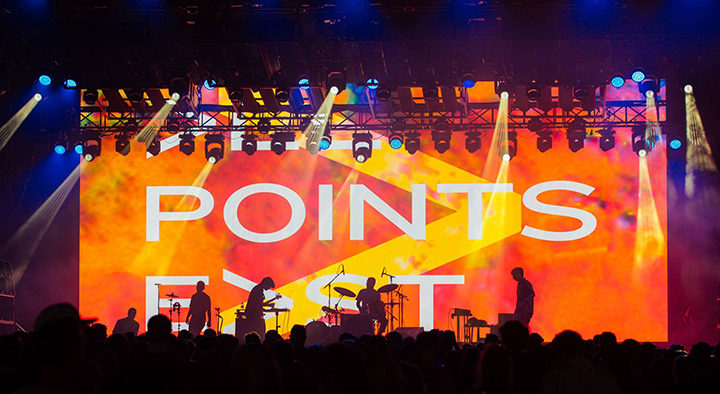 All Points East is London’s most promising new festival. It feels like only a few months ago it started appearing on social media, boasting a phenomenal line-up with headliners LCD Soundsystem, The XX and Björk. As the event drew in closer and closer, more and more names were added, however, the line-up did not seem to display a clear identity. Set over three days in Hackney’s Victoria Park, there were moments where it felt like was a shortage of shows to choose from, nevertheless, the gems that were there had truly memorable performances. Highlights such as Flying Lotus 3D, Björk performing in a thunderstorm and LCD Soundsystem‘s stunning headline set ensured the festival made a strong debut. 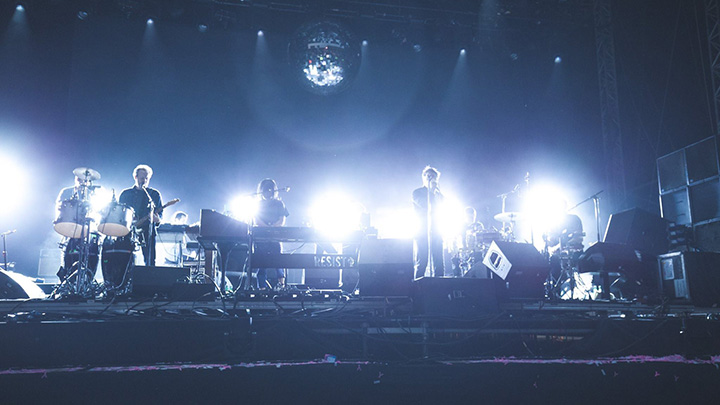 The festival eased revellers into proceedings by kicking off Friday afternoon. One of the first things that was a must-see was the Despacio tent, a stage created by James Murphy of LCD Soundsystem, with David and Stephen Dewaele of Soulwax fame, aka 2 Many DJs. Made up of an intricately designed set of eight stacks of speakers and amps, guests would enter into the pitch black room and be hit with a wall of heat. Once, when the lights came up over the disco ball and the electro-infused version of Queen’s ‘Another One Bites the Dust’ played through the system, it proved to be a moment of absolute joy.

As the evening progressed, there was a double-hit of New York post-punk electronic music, courtesy of the Yeah Yeah Yeahs and LCD Soundsystem. Wearing an all-silver ensemble, and dancing under the sun, Karen O lead her audience into the evening with a stellar performance of both old and newer hits. Then followed a monumental set by LCD Soundsystem. Opening with ‘You Wanted a Hit’ Murphy commands the stage from behind his mike stand, rarely moving and projecting his David Byrne-esque voice over the captivated audience. Then followed a mind-blowing set of hit after hit, executed to perfection by his team of tightly knit instrumentalists. When keyboardist Nancy Wang took command for a cover of Chic’s ‘I Want Your Love’ the crowd went into tremendous elation, this energy continued onwards until the end of the set when they closed with the classic ‘All My Friends’ before the crowd had to leave, somewhat reluctantly. 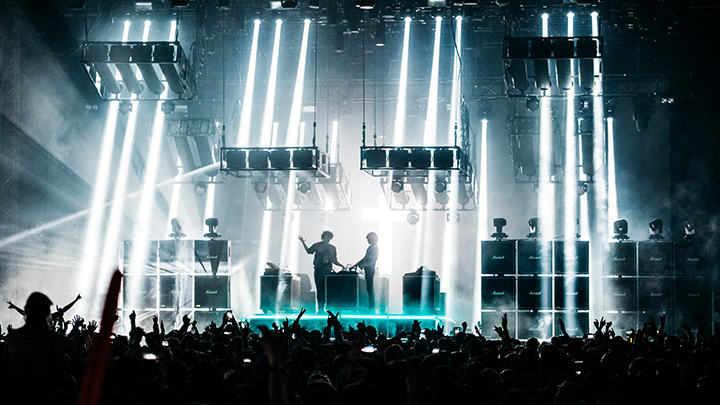 The second day promised even more big names with acts such as Soulwax, Hunee, and Justice all joining the bill along with headliners The XX. Soulwax came along with three drum kits, a few rather large monitors and two spinning heads. Their performance was one of the best of the weekend, with a sense of just letting go and an audience truly throwing themselves into the feel of it all. In the stiflingly hot North Tent, French electronic legends Justice descended upon their audience with rock-inspired electronic bangers. With pivoting light displays and a commanding presence, the crowd erupted when ‘We Are Your Friends’ and ‘DANCE’ blasted out. 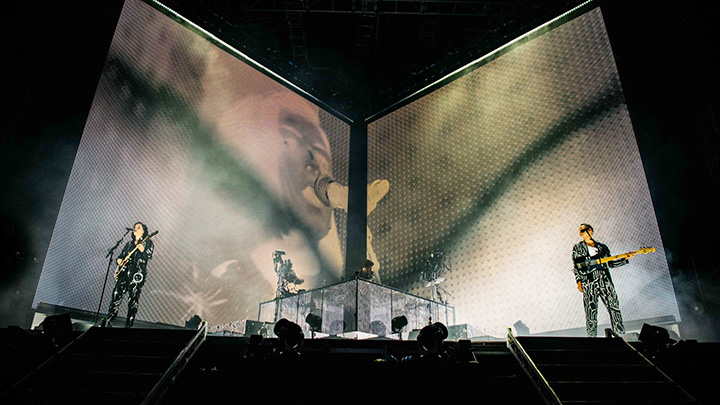 Japanese DJ extraordinaire Hunee took to the decks, armed with a plethora of danceable anthems. Taking to the X stage, a large half indoor, half outdoor construction, the inward facing speakers seemed to engulf revellers in sound upon entry. As Omar-S took over to headline the stage, the main stage saw London’s goth kids turned indie favourites, The XX pull out a phenomenal set packed full of old classics and new favourites. With a more noticeable electronic influence in their latest projects, Jamie xx’s DJing was put more at the forefront, they even allowed him to play a couple of hits from his solo album. The ending ended with Romy pointing to the sky and telling us about the lightning approaching the end of what had been a glorious day. As guests were quickly shuffled out the park, the atmosphere was somewhat electric, it had been a strong day for good performances and the natural light show at the end topped it off nicely.

Sunday was the last day of proceedings, the main draw had to be the promise of Flying Lotus 3D. After being handed a pair of 3D glasses, and being ushered inside the tent, there stood a big plinth made up of what could only be described as some alien flesh-like substance. As the man himself entered, a heavy bassline drones out and before anyone had the chance to realise they were transported to an intergalactic mission through space, time, zodiacs and alien-like bodies. This was without a doubt one of the most mesmerising performances of the weekend. Another standout moment had to be Mr G’s set at the X Stage, displaying a true love for his job, the DJ was getting well into the groove by dancing around and on top of the decks. He was followed by two very strong women indeed, Yaeji and The Black Madonna who each delivered impressive sets. 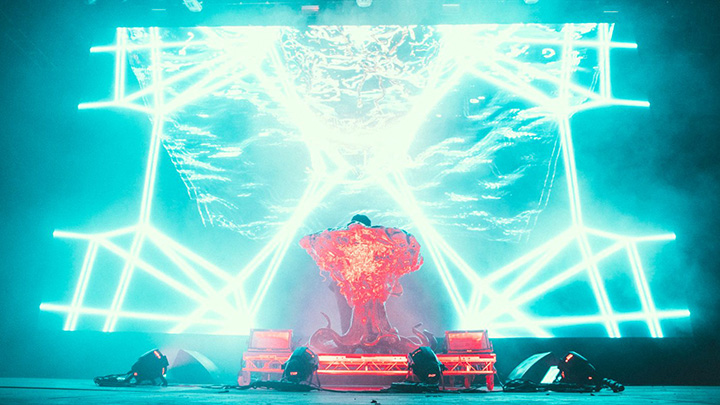 Then, of course, there was the effervescent, and always eccentric Björk. Coming out perfectly on time, which is always a lovely surprise, the black screen covering the stage was pulled down to reveal a stage covered in flowers and fauna. A string section, DJ and drummer took their places, next to giant golden lotuses and pumpkins. Then as the set began to blow in the wind and the sky began to growl with an incoming thunderstorm, a message appeared telling us to be aware of climate change and the matriarchal dome. Soon after, the fauna started to turn and reveal the woman herself in an intricate face mask and flower-inspired white dress with puffed sleeves. Delivering perfectly executed vocals and a carefully curated selection of songs from her most recent ‘Utopia’ album, an electro-tinged collection of delicate melodies and gentle strings. Experience this while under a sky broken apart by lighting every two minutes is sure to be a lasting memory. 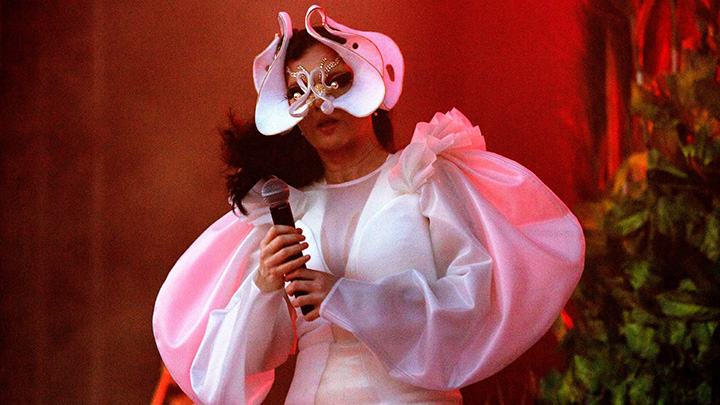 Overall, the weekend was memorable and featured stellar performances. Though it did feel like they were somewhat few and far between. It’s worth noting that this is the first year and it had some big headliners, but it felt like there wasn’t much choice and quite a lot of waiting around. As regular festival-goers, it was easy to miss the urgency of seeing all the best acts at the same time. Nevertheless, it did mean there wasn’t a compromise on having to see who you wanted. It was a very strong premiere, and much of London will be waiting to see how it develops in the coming years. 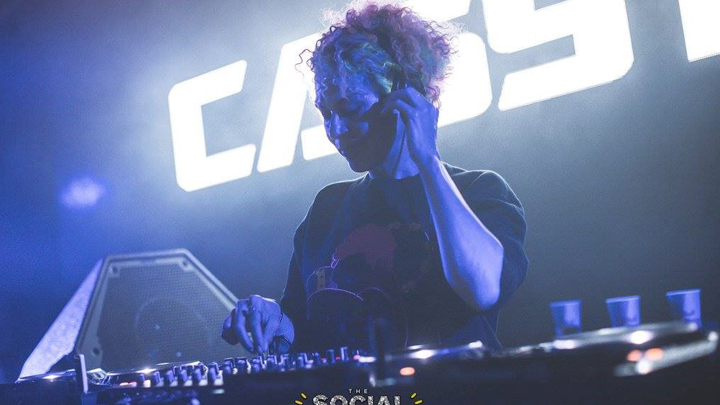