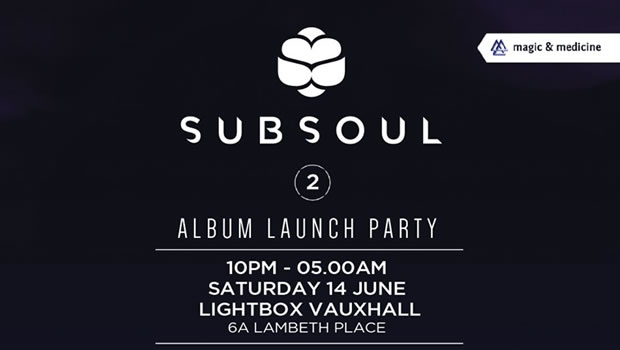 Subsoul return to London’s Lightbox on Saturday June 14 for their next party & album launch!

After their last sell-out show with DJ EZ, Toyboy & Robin and TÂCHES, this time they will be utilising Lightbox’s full spectrum with Its labyrinth of rooms, awesome Funktion One rig, eye-popping light production and – weather permitting! – its outdoor terrace in order to celebrate the release of their forthcoming 40-track album ‘SubSoul 2’.So down to the line-up, they’ve drafted in the mighty Shiba San, who’s track ‘Okay’ on Claude VonStroke’s dirtybird label has been House music’s recent highlight, alongside GotSome, Low Steppa and New York Transit Authority who will bring the darker side of SubSoul to the night & SubSoul resident Ben Knight & the SubSoul DJ’s! You can grab tickets right now from Resident Advisor

Tags
Previous Article
Them – Plan B, London
Next Article
tINI: Leader Of The Gang