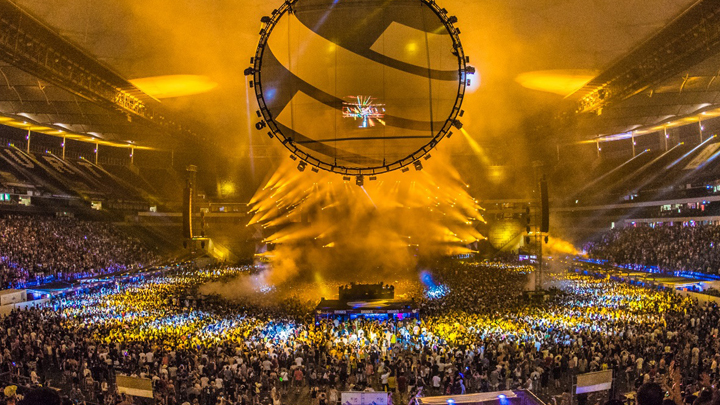 Transforming Frankfurt’s Commerzbank-Arena into the “biggest club in the world” for its fifth birthday, BigCityBeats combined the feeling of a club with an open-air festival perfectly at the weekend.
Spread across 20 stages, 140,000 dance music lovers filled the grounds of one of Germany’s biggest football stadiums in anticipation of high-energy sets from more than 100 of the biggest names in house, techno and dance music..
But before Data Transmission even gets to World Club Dome, there’s the jaw-dropping prospect of experiencing a succession of DJ sets whilst being 10,000 feet in the sky, on the World Club Jet, with less than 100 other party-ready competition winners.

WORLD CLUB JET
After arriving at the private X-Jet terminal, just a short journey from Stansted Airport, the scale of the private Boeing 747 that we’re just about to board becomes real. With ‘World Club Dome’ printed on its front side, it seems to stretch for miles and miles; with wings almost as big as some ordinary planes.
As Data Transmission walks up the long, humid tunnel – filmed by the festival’s own videographers – we’re treated to champagne on arrival and canapés a short while later. The jet itself is one of the most luxurious aircrafts we’ve ever stepped foot on: plush leather seats, endless leg room, Ferrero Rocher’s and the option for a seat massage – that’s without mentioning the amazing views whilst in the air and surprisingly powerful sound-system.
“We’re gonna rock this plane straight to Munich,” encourages the World Club Jet hypeman, adding “this is the weirdest thing I’ve done in years… it’s the start of a crazy weekend and I want everyone to stand up and make a really big party” before DJ Rui gets behind the decks.

At first warming up the 40-person crowd with summery house groovers, the atmosphere remains quite calm and chilled ahead of a performance by Afrojack. With a small espresso in hand (it is only 11am), the Dutch DJ plays to probably his smallest audience ever.
Veering away from the usual EDM bangers, he instead opts for feel-good house and a few classics before inviting Rui back to play his summer-starting anthem ‘Feel Alright’.
After a one hour stop in Munich to pick up the rest of the competition winners – including one group of Le Shuuk superfans in unicorn onesies (they pop up everywhere throughout the weekend), the energetic cabin crew quickly pull the blinds down to create a proper club vibe, ending the previously civilised atmosphere.
Le Shuuk’s bass-heavy onslaught transforms Eifel 95’s classic ‘Blue’ into a plane-rattling anthem (and it’s not the last time we hear it over the weekend)… it’s like we’ve gone to sleep and woken up in a parallel world.
The bass is so loud, in fact, that he blows out World Club Dome ambassador and German superstar DJ Robin Schulz’s speakers in the front cabin as the turbulence increases just before landing…
Partying on a private jet is a completely surreal experience that really is unlike anything else.

FRIDAY
After navigating our way out of Frankfurt Airport and to our hotel, we head out into the heat and straight to the unbelievably massive stadium – via a party-starting train on which two guys blast out techno from a tiny portable speaker.
It seems like the whole city is going to the festival as hundreds of Europeans charge out of Stadion station chanting ‘Big City Beats’. Walking up the long path to the entrance for the first time, the road is surrounded by towering trees and cheers and bass erupts from inside.
Once inside – after an impressively thorough security check – we head straight to the main stage. The biggest of nine stages, with a 50,000 capacity, remains constantly filled throughout the whole weekend.
Smoke machines blast every minute, the fire from the pyrotechnics heats up those in the higher tiered seats, flashing light shows of neon strobes take in virtually every colour, towering speakers shake the stadium and multi-coloured eye-catching visuals cover at least a dozen mini screens.

If there’s one thing that stands out straight away, it’s that BigCityBeats spare no expense in terms of massive, jaw-dropping production: during Hardwell’s headline set he’s joined by two dancing robots, covered in hundreds of neon LEDs which change colour every second.
To close out the first night, the Grand Opening Ceremony more than lives up to its name: think Eurovision but for dance music. There’s an endless explosion of fireworks, cannons constantly shooting streamers and even a voiceover informing the crowd of all the countries that BigCityBeats has expanded to, ever since starting its life as a radio station some 20 years ago, and how proud they are of their five-year-old child, World Club Dome… 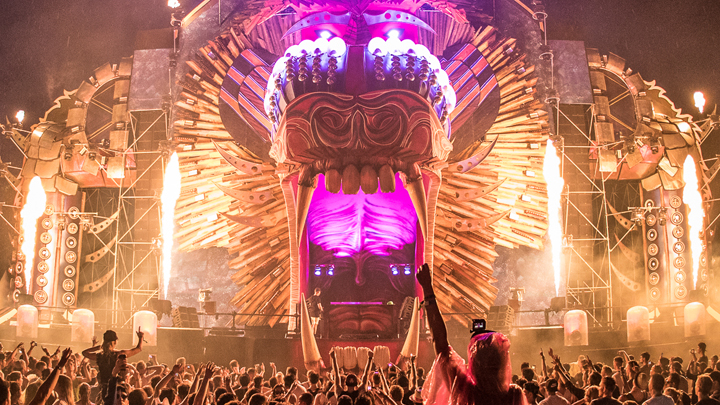 SATURDAY
After fuelling ourselves up for the day, we take time to explore the entire festival. Made up of several large stages and a few resident-style ones, there are also plenty of food stalls (our favourite is the Street Pizza van), bars and hidden areas. Undeniably the loudest stage, Q Dance remains packed with hundreds of hardstyle heads fist-pumping in the open air where it feels like the endlessly pounding 150bpm bass is going to rip through your chest.
Through the trees it’s like another world entirely. Solomun’s Diynamic label hosts Saturday’s poolside sessions, welcoming daytime techno from H.O.S.H., Magdalena, Adriatique and Solomun himself as dozens party from inside the pool and on the slides.

Further round the trees is the hugely impressive Forest stage – a massive towering red tent decorated with owls, butterflies and dozens of trees onstage – which quickly becomes Data Transmission’s favourite. Packing the tent with high-energy house and acid-infused techno, layering her own seductive vocal over the top, Miss Kittin makes it feel as though it’s 4am not 4pm.
There is no sense of time inside the tent: euphoric, atmospheric and trippy, it’s easily the best stage of the festival with club-worthy strobes and blinding smoke machine blasts. 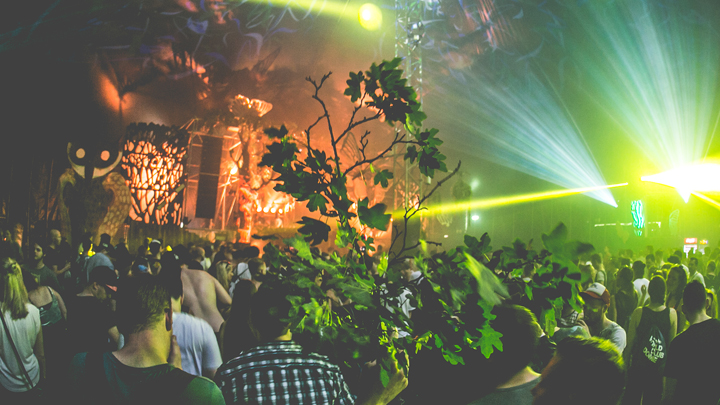 After sharing a hug with Miss Kittin, KiNK delivers an equally impressive performance, lifting each instrument in the air so the crowd knows he’s playing his piano-led uplifting house live. Playing the keys whilst wearing a huge smile across his face doesn’t go unnoticed, either, as an older guy applauds him from the crowd. Around a third of the way into his set, the inventive musician makes an unexpected but much welcome excursion into pumping, laser heavy acid-tinged techno. He’s so into it that it’s interesting to watch and makes you want to join him onstage.

One of the biggest surprises of the day comes when Deadmau5 forgoes his journeying electronic productions and trademark mouse head, at least for the early part of his set, in favour of 30 minutes of chunky, punishing techno more suited to his Testpilot alias.
Ctrl’s monstrous ‘Charge’ is a highlight, though we can’t help thinking that the main stage crowd aren’t as into it as they should be – perhaps because it’s miles away from the EDM bangers and slightly ridiculous cake throwing hedonism that Steve Aoki just unleashed on the gigantic crowd. For the latter part of Deadmau5’ set, though, the crowd is treated to some of his biggest hits including ‘Ghosts ‘n’ Stuff’ and ‘Strobe’, each built gradually to a strobe-heavy laser-fuelled climax.
Though it’s his choice of closing track, ‘Raise Your Weapon’, a euphoric yet emotive classic, which takes on a more poignant meaning in light of the recent terror attacks and leaves a lump in our throat…

SUNDAY
Following the previous night’s terror attack in London, the police presence at the arena is far heavier for the final day – officers and security staff at almost every turn, it’s reassuring and calming for festival-goers who are here to have the best time of their lives.
It doesn’t stop the Frankfurt crowd from heading into the stadium nice and early, though, with hundreds of Alle Farben fans eagerly queuing to get inside the Skyline stage, which is built up with towering skyscrapers.

The 31-year-old German DJ, who looks like he could be in his late teens or early 20s, is having the time of his life: constantly smiling, bouncing up and down behind the decks and getting his growing audience moving and singing along to standout Euro-pop-style banger ‘Please Tell Rosie’.
Two cyber-outfitted dancers soon join him, launching inflatable balloons into the crowd as the chorus drops, whilst the crowd records the moment…
Splitting our afternoon between the Forest stage and poolside sessions, we make the most of the now-beaming sunshine.

Sven Vath’s Cocoon party, and a dozen inflatable pink flamingos for festival-goers to lounge on, pack the poolside sessions thanks to Josh Wink’s heavy house and techno whilst Andhim keep the Forest tent busy with atmospheric techno builders as the crowd screams and cheers.
As the sun beams down Ilario Alicante takes over, laying down chunkier, progressive and pumping techno in front of a constantly growing crowd before Luciano follows with funkier selections. All that’s left is for label boss Sven to close out the weekend with a consistently pumping closing set of the finest techno.

As we leave the stadium for the final time, after one of Data Transmission’s craziest trips to date, we can’t help but think festivals don’t come much bigger than World Club Dome… a constantly unbelievable, completely unforgettable weekend. 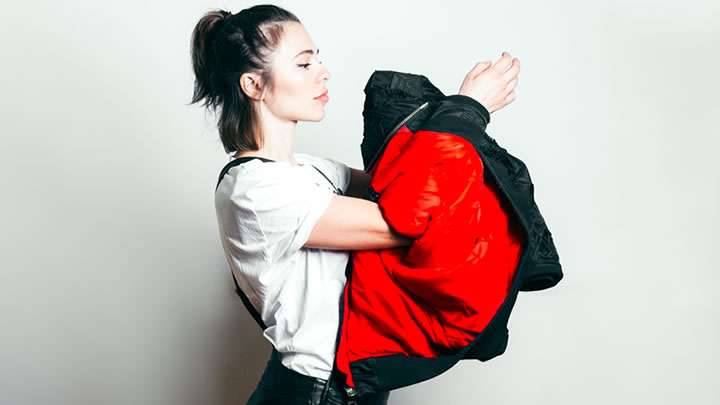