Stepping up out of the U-Bahn I see some green light in the darkness lighting up trees a way down the street. That has to be Tresor, I can’t see the building but from photographs I know its set back from the street. So like a moth to a flame I gravitate towards the light, my heart fluttering with excitement and I’m smiling so hard, I’m even letting out quiet little ‘whooooooos’ to myself.

Wow, I walk past the last building that is blocking my view of Tresor and yes, I obviously knew what it looked like, but to actually be there in the flesh at last was fantastic. It really is an unmistakable power station, with the 2 chimneys standing proud, and in my imagination choo chooing basslines all over the Fatherland!

I can’t get to the entrance fast enough, there’s a bit of a queue but it goes down fast and before I know it I’m across the threshold. The bouncers say something to me in German, I say ‘sorry I’m English’ and it became a pass to get lovely smiley treatment. ‘Hallo, Welcome, Please go there’ I think was the phrase used as he pointed to the cash desk. I didn’t get searched or anything, which didn’t seem to be the norm, but to be honest I didn’t spend many seconds thinking about it, I paid my 13 euros and stepped into the walkway, desperate to dump my coat off, and get on with it. I knew there is three areas with music in the club,  my favorite being the notorious basement which is called Tresor, which looks like the original bank vault.

Down there the DJ box is fronted off by metal bars, the ceiling is low and it has a dark and dirty feel, just how I like it, so even better that this is where Pole Group get to play all night.

At ground level there’s the cloakroom and toilets and some dark little cubicles to shove yourself if you need some time out. I drop off my coat and head to the loos, there’s plenty of them so I don’t have to wait, and not only that, they’re clean with loo roll. They are covered in graffiti, not the pictorial kind but endless writings in different languages. I love it. Kreuzberg is notoriously covered in street art and Tresor is situated in said district so it seems befitting. Maybe I’m just a little over excited  because at this point even the toilets seem great!

I head out and scan madly for Tresor, and there it is, the illuminated red lettering spelling it out for all to see. At this moment there’s a chain across the entrance so obviously Pole Group are starting later, but where’s the line up lists? I don’t see any, so for the time being I remain in the dark and head up to Globus, the other main room of the club. Here’s where the party’s at for now. The dancefloor is smaller than it looked on the pictures as I thought this room would be massive. The ceilings are high but the sound is loud and crisp. Globus is already busy, but the music is very early doors techno, slow and thuddy with a bit of a funky groove, but quite frankly I’m not in the mood for getting into this kinda vibe right now, I’m wanting multi facets and the sooner those chains get removed from the entrance to Tresor the better.

In Globus the people are smiley, the lighting is pretty cool but it still manages to remain quite dark on the dancefloor which is always a winner. I stick around for a bit of a shuffle but my feet are itching, and slow won’t do, so away I head to the +4 bar, a massive bar area with some kind of chill out music, it has views of all the workings of the old power station and apparently views down to the basement, Tresor. Time to get the exploring out the way I’m thinking, and go and get chatting to some of the locals.

The walkways in the club are moody. If you want bright lights and bling you’re in the wrong place kinda moody, they’re stark and dark with just enough light to hint that you’re heading in the right direction. I get to the bottom of the corridor only to see that Tresor is chain free, so it’s obvious, that’s where I’m going. I step down under the red lettering and step into the infamous 30m tunnel. And it is now that I see why Oscar had named his photo on Instagram ‘Tunnel to Hell’, it has that kind of feel. It is about as dark as you can get without banging into walls, but has the odd small red or green light to inform you of your path. It’s concrete, it’s dirty, it’s what I want. The distant thuds turn into chunks of basslines as I reach the end of the tunnel and step into the back of the room. There’s loads of smoke, red lights and quite a few people down here already. I wanna get my bearings and soon realise what’s what.

The room is pretty intimate and the concrete pillars have foot high concrete podiums at their base, which in a low ceiling room is a cool feature for making

the room appear even more intense when full of bodies. Of course there’s only one place for me and that’s down the front. There’s a couple of reasons I go to the front, usually it’s the loudest, but also because I don’t wanna be distracted by punters. I don’t get on that dancefloor to strike up conversations, that’s what the bar or chill out are for.

I get to the front and am ecstatic to realise there is a bank of speakers all across the front of the DJ box. There are also large speakers in both front corners pointing in diagonally, and then obviously the massive DJ monitors I can see inside the box, so there’s no way I’m gonna be worrying about the sound, and that’s not to mention the other speakers, wherever they are. It was too dark to go on an inspection and besides, I wasn’t worried, I’d walked from back to front and it didn’t sound any better anywhere else so that was that. Yeah the DJ box is caged in, and all in all it appears to be the perfect kind of room for a ‘Domination’ party. Smoke, red lights and plenty of strobe give a real feeling of disorientation. 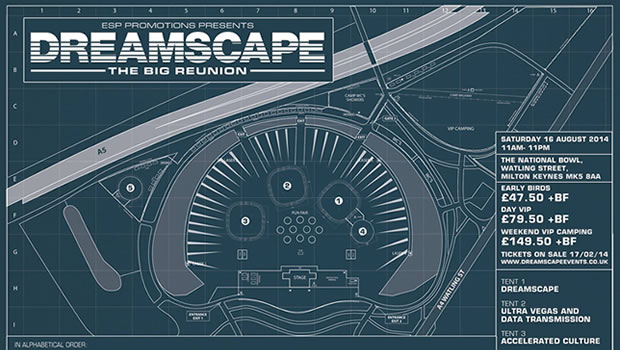