My Music Influences by Saytek

UK Live artist Saytek (aka Joseph Keevill) has sky rocketed to become one of the electronic music scene’s most in-demand live acts.

From multiple shows in Ibiza at The Terrace of Space (RIP) & The Zoo Project and fabric London; a player on Berlin’s underground scene performing regularly at Tresor, Golden Gate, Salon – Zur wilder Renate, Chalet, Sisyphos, Kosmonaut, Ipse, recently making his debut at Watergate Club, to performing live at Danny Rampling’s prestigious Shoom 30 year celebrations; Saytek upholds a relentless tour schedule performing at some of the best parties and festivals around the world.

A master of musical technology with a fresh energy and an ear for melody, Saytek has received acclaim from far and wide for his unique style of improvised live shows, using a plethora of kit to perform a unique blend of deep techno and tough house grooves with dubby acidic hues. Saytek’s music output is prolific and includes Live Jams, EPs and live albums on his own Cubism label, along with releases on labels such as KMS, Superfreq, Liebe*Detail, Soma, Bedrock, fabric (London Club), My Favorite Robot, Wiggle, My Favourite Freaks, Detone, Emerald City, Freakin 303, Constant Circles and Hike Recordings, to name a few!

Saytek’s ‘Easily Influenced EP’ is out now on Awesome Soundwave, so we asked him to give us his musical influences to give a bit of background to what makes him up. 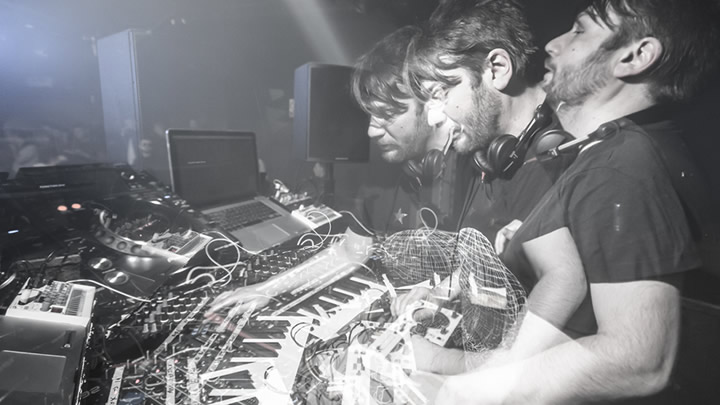 Saytek says “I have a varied taste in music, but for this, I have decided to focus on the dance floor tracks that I would say still have the biggest influence on my live shows. These are the tracks that made me want to make Techno and House music to make people dance and lose themselves, as that’s what they do for me! I am totally in love with all these tracks, they are not obscure or B sides, but all huge underground hits of there time!”

Plastikman – Spastik
Such a simple track, but very clever for its time using a minimalistic drums, a wall of snares filters, FX and an arrangement that creates tension and pay off at all the right times to create devastation on the dance-floor.

In fact, the whole Purpose Maker series was pretty revolutionary for me and Techno in general I think! This track is builder and huge inspiration. The chords are perfect and I love the way they filter to reveal through the track. Once again an exercise in Techno simplicity with purpose!

This tune! Melodic Techno that moved my mind, body and soul on so many dance floors. I love it!

Laurent Garnier – The Man With The Red Face (Original Mix)

Still one of my all-time Techno faves! Beautiful sax meets Techno done properly! It makes the hairs on the back of my neck stick up every time!

I remember hearing this for the first time and just thinking how on earth did they get this sound? It was the beginning of a lifelong quest of electronic sound design!

Probably the most famous acid techno track ever, pounding drums and acid… what else could you want from a track?

Deep, melodic and trippy! It sends the whole club into a dream state, a lovely tune!

An absolute banger! Everyone sings along to “wob wob wob wob, bow bow bow bow” and the “ecstasy, ecstasy” when it comes on in the club! A Game changer!

‘Ambient Works’ is one of my favourite albums of all time, but I remember hearing this at an illegal warehouse party in East London back in the 90’s at 9am of summer’s day. The combination of this track, people dancing and the sun shining through the windows was a life-changing experience for me!

Future Sound Of London – Papua New Guinea
The only track on here which isn’t four to the floor, but such an amazing and influential track! Love it!

Saytek ‘Easily Influenced EP’ will be released on October 26th 2018 on Awesome Soundwave.

Saytek walks us through his ‘Improvisations’ album
Data Transmission September 5, 2019

Saytek walks us through his ‘Improvisations’ album