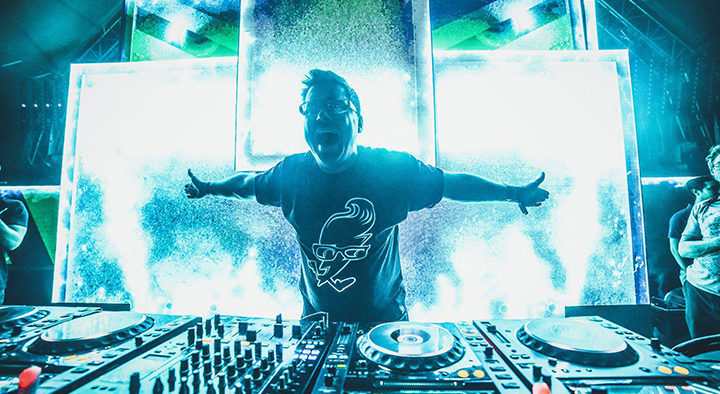 At this year’s sold out Hospitality In The Park, we were fortunate to sit down for a catch up with composer, producer, performer, broadcaster, DJ, A&R and business visionary Tony Colman AKA London Elektricity!

The co-founder and CEO of Hospital Records and sister label Med School, has been instrumental in the development of D+B as we know it today. Responsible for some of Hospital’s biggest anthems, such as “Billion Dollar Gravy”, “Different Drum” and “Just One Second”, London Elektricity has cultivated a first class reputation as both a producer and DJ and continues to push the genre he fell in love with in the mid 1990s to this day.

Hospitality in the Park has sold out again, how does that feel?

Well, it feels quite amazing three times in a row, to sell out an event this size, in London. It feels amazing, I feel very proud of my whole team and our huge family – 12 and a half thousand people here. It’s quite insane.

Who excites you on Hospital Records at the moment?

All of the artists that we sign are signed because, in their own way, they are really exciting. 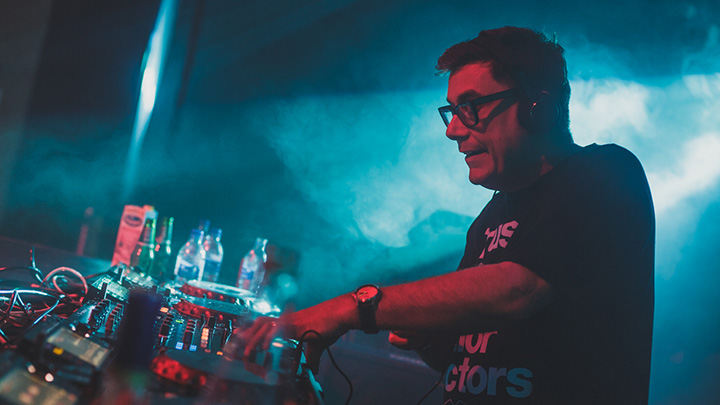 Do you have quite an active role in signing?

Yeah, I oversee the signing of everyone. I founded the label 22 years ago with Chris Goss and the buck stops with us. It doesn’t happen unless we actually check everything. But some acts just get signed on an impulse. A year ago to the day, there was a young man in the audience called Degs and Chris Marigold, who runs our talent agency Clinic Talent. After this event (Hospitality in the Park ’17) he said “Tony, have a look at this guy’s Facebook page” and I looked at Degs’ Facebook page and there he was freestyling these amazing spray outs over liquid tunes. Everyone else was on holiday, and I was like we’ve got to sign him and I kind of rushed through the signing, sort of without telling anyone. Luckily it worked out really well! I got quite a lot of grief when everyone came back from their holidays because I’d signed Degs. They were like what have you done and I said “I had to”, sometimes you just have to do it. So a year later he’s going to be hosting my set, and I’m going to be playing some of his solo tracks during my set. He’s got an amazing voice, he’s a very lovely person, he can sing, he’s a great songwriter, he’s incredibly exciting.

How does it feel being such a big part of the scene, and supporting artists like that – must be very rewarding?

It’s wicked bringing people through! Actually taking a punt, taking a risk on someone you really believe in. And then seeing it work, it doesn’t always work, sometimes it just doesn’t happen. But when it does, it’s amazing. It feels genuinely brilliant to be a part of building someone’s career.

What have been some of your favourite releases on Hospital this year, and what is coming up?

Wow, there’s been a lot of releases this year. Some of my favourites aren’t necessarily the most successful ones commercially. Like we’ve done 3 EPs by Bop, who is on Med School and he’s done a series of 3 EPs called ‘Untitled Patterns’ and they are basically an interpretation of minimal techno within a drum & bass context. So there’s twelve tunes without titles, they’re all called ‘Untitled Pattern 48’, ‘Untitled Pattern 52’, they are absolute genius. They are works of genius. And they are my favourite by far, simply because of the experimentation within and the fact that he’s got the courage to not title tunes. Because that’s how he is, he believes in the concept of the music so deeply. There have been some amazing releases by almost all of our artists. Signing Kings Of The Rollers, the polar opposite to Bop. You know, they are the kings of new school jump up. Inja’s album as well, ‘She Just Wanna Dance’, it’s such an important track that we made t-shirts for it, it’s such a powerful message. I mean the whole of Inja’s album has got a powerful message, my eight-year-old boy is obsessed with it and the lyrics are printed within the CD, and there’s no swearing. And it’s not kids music at all, it’s not EDM at all, it’s proper jungle. It’s really thematic, intelligent, the music by Pete Cannon, Whiney, Logistics and Serum is brilliant. So that album is totally outstanding, I mean I could go on for hours about what I love. 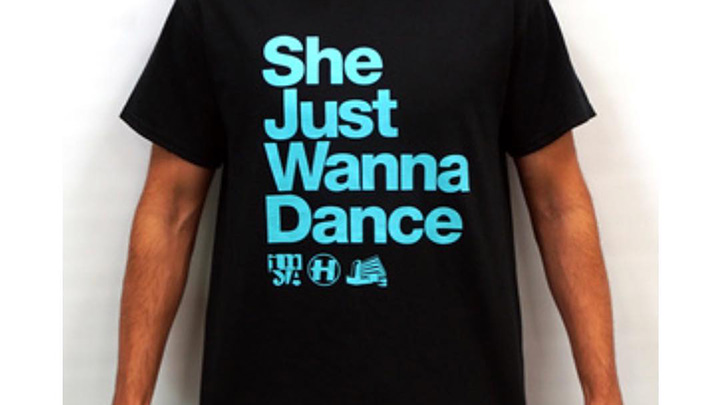 And what does it mean to you personally that your music both as an artist and through the label reaches out to so many people, even your son can listen to it?

It’s really important, reaching people and making people happy, trying to make this world a slightly better place through music that’s what drives me. And that’s what drives the team at Hospital Records. Now there’s loads of different ways of trying to achieve that, but it’s a difficult thing to achieve and it’s very easy to get it wrong. But we work very hard at trying to get it right, and I think most of the time we succeed. That’s what it is all about for me personally. With this art form of music, trying to improve people’s lives a little bit, make a little bit of a difference. If we can do that, and feed my 21 staff and 25 artists at the same, and my family, then I feel that’s an achievement and I feel quite happy.

The Hospitality series seems to know no bounds, another UK tour coming up later in the year and we had Hospitality On The Beach this summer…

Hospitality On The Beach was for me the highlight of the year, in terms of our events by a long shot. It’s something we’ve been wanting to do for years and Josh our events director, finally found the right place, this time last year. And said, “we need to press go on this”, so we were like yes let’s do this. So this July there we were, with two and a half thousand people who trusted us that we would put on a brilliant holiday and we did. They loved it and it was amazing. Now I’m in this position, we’ve been going 22 years, I want to know that every year we’re going to do that. Every year we’ve got Hospitality On The Beach in the diary at the beginning of July to look forward to. Because when it’s really cold in February and the beast from the east descends, I want to know that in July I’m going to be on the beach in Croatia playing a six hour set. So as far I’m concerned we need to do that every year. It was amazing!

How do you manage your commitments? There’s the label, events and being an artist yourself.

It’s an interesting, ever-changing challenge. I’m working on a new project at the moment, which is a lot more complicated than any other project I’ve ever made before. My releases tend to be quite complex affairs, musically, they’re very involved for drum & bass. This one is far more complicated, there’s a lot more composition involve in it which in itself is quite a challenge. So balancing that with Hospital, we’ve moved our premises this summer which is a huge thing. We take on new staff, we’re expanding, our events are expanding. You asked earlier what are our plans for the future, well our plans are simply to change. And to never ever be the same. That’s a self-fulfilling prophecy that goes on forever, which works as long as you put the energy into it but there’s no ten-year strategy. So there’s doing all of that then I’ve got two kids. One has just started secondary school, so there’s all of that to balance. I don’t know how I do it, I’m lucky enough to have an amazing, very supportive wife who has been with me on the whole of Hospital’s journey. We’ve been married twenty years and she supports me amazingly well. I’ve got an amazing team at Hospital, we are a family. You need good people around. You’ve only got one life, don’t surround yourself with people you don’t want to surround yourself with. Surround yourself with people you genuinely care for and want to go to the pub with, and would go on holiday with. That’s a recipe for making it work. 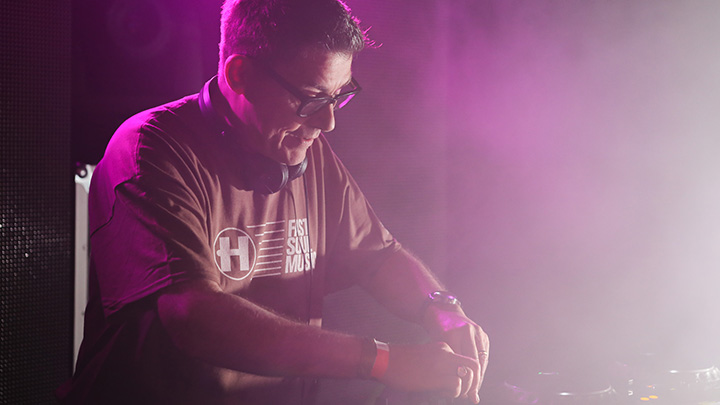 You touched on your new project a little bit there, as an artist do you find new ideas springing themselves on you? Taking inspiration from the scene? What’s the creative process like for you?

You can’t describe where, how, why ideas come but they do. They either do or they don’t. If you’re the sort of person who’s got a part of their brain that does come up with crazy ideas, then it’s nice to have an outlet for them otherwise you will actually go crazy. So I’m that kind of person, I need an outlet. My music is a very handy outlet for them, and I’ve managed to learn how to craft my ideas into tunes, that so far people have wanted to listen to. I never take it for granted that people will because each release or project is different and I don’t like to repeat any formula. So I am testing people a bit, but so far it’s kind of worked. It’s not a totally selfish process, it’s actually a process I have to do. I’m not doing it out of vanity or anything, I absolutely have to do this, A lot of the time people in the company would wish I didn’t because then they’d get more of me in the company. I wouldn’t do Hospital Records if I wasn’t making music, the music has to come first.

So what was it like playing with live musicians last year?

I formed my own big band, that was last year. I wasn’t really DJing last year so I toured with the big band and it was a 22 piece big band. A huge horn section, rhythm section, four vocalists, percussionists. It was amazing, I played bass – loved it! First time I’d ever played bass in a band, I really enjoyed it. You can’t sustain that, it was good to give it a year, every gig was amazing and we were really sad to finish. But it’s good to do that.

Did you feel refreshed coming back, having been away spending time not DJing?

Absolutely, I really did. And I really appreciated it. I’ve always appreciated being able to DJ, to actually get paid to play music you love. To get the opportunity to play in front of 5,000 people or 6,000 people as it will be tonight, it’s a real honour. You’re so lucky, DJs are so lucky. Most of us work hard and earn that, we earn the right to do it but every gig you’ve really got to understand that you’re in a privileged position. And it’s a position of responsibility to entertain that many people, so you have to give it your everything. I love it!

Hospitality On The Beach info and tickets here 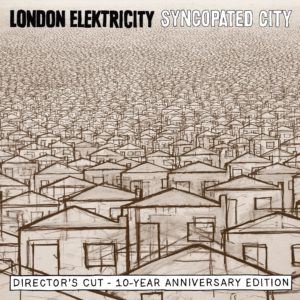