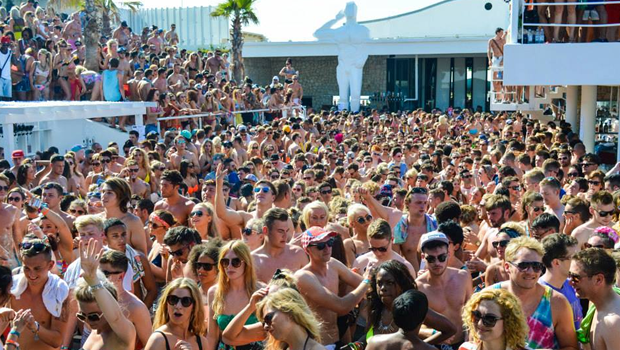 In just six years, Croatia has gone from East European oddity and host of one small UK festival to what mainstream media  are zealously calling ‘The New Ibiza’. No more is the Croatian Effect more obvious than with Hideout Festival: Starting out in 2011 as a niche festival of just  a few thousand people, within three years this event has tripled in size to over 12,000 guests. Similarly: just as the former Yugoslavia has rebranded as a pan-European tourist hotspot: so too has this Warehouse Project backed animal gone from semi-word-of-mouth cheap weekender to what could possibly be described as the world’s first mini-super-festival: packing a line-up that punches into a weight class of festivals more than five times its size, with tickets that sell out months before and a level of Instagrammed, Twitter-hashtagged and Facebook-liked hype that far outstrips its population or age.

Suffice to say that Hideout got the last two years right to such a degree that even the most sober attendees talked about the experience in terms usually reserved for organised religion: so this year pressure was on to deliver. Up until this point Hideout’s visitors were the festival explorers. That group of music puritans that are in their own way easier to please: provided you get the line-up right and the event sits in that gap wherein people in the office back home have heard of the event, but definitely haven’t been. In 2013 however, everyone in the office, and their flatmates have heard of Hideout: and anyone that could get their hands on a ticket did.

Hideout’s challenge this year then was consistency: a level of anticipation shot through the opening event as 12,000 people massed on Hideout with an attitude of “We’re ready. Are you?” Zrce Beach: long considered East Europe’s top playground for international DJs revelled at the UK’s challenge. As scorching sweat on chiselled (male and female) chests trickled down, Zrce’s Papaya, Aquarius I & II and Kalypso’s open air clubs roared into life. Hideout was coming up.

What a ride. Hideout’s format is simple: Pool parties from midday until sunset at Zrce Beach, Boat parties from adjoining town Novalja running in tandem before the sunburned and the sea-splashed retire to apartments for brutally-cheap-Croatian-vodka fuelled pre-drinks and are re-united back at Zrce every evening from 11ish.

Glastonbury has mud and wellies. We Are FSTVL has shufflers and we at Data Transmission don’t believe in Family Festivals before marriage but we imagine that those events’ symbol would lie somewhere between Harry’s Premium Creche and Waitrose Hummus. Hideout’s own vibe can be entirely captured in the daily pool parties. Thousands of oiled bodies move together whilst the likes of DirtyBird and Hot Creations push out thrumming nu-disco and appropriately beach-sexy vibes. A sea of cocktails and cash: one effect of Hideout’s hype combined with consistently grim times at home meant every single person here was here to go big: last year might have been beers by the pool and head nodding but this time it was groups of five, of seven, of 11 camped around buckets of Belvedere, bouncing to the music, eyeing each other, drinking in the heat both of Croatian sun and of a beautifully co-ordinated line-up: from Miguel Campbell’s infused summer basslines to Kill Frenzy’s crossover hip-hop inspired sound.

One day economists and tourism experts will put together lectures on what caused the Croatian storm but for now a fair guess would be the Boat parties. They may have been born in Ibiza but it was Croatia where they went from novelty to integral part of the festival experience. Data Transmission hopped onto the 2020 Vision boat party to hear Bicep, Ralph Lawson and Simon Baker go all hands on deck (see what we did there?) to a tanned crowd. People on seats, people on the side, people hanging off the side, people next to, in front of, standing on speakers: the density and beauty of the wildlife may have been akin to Noah’s ark but there was nothing ancient about the beats as our trio mustered an easy journey from deep house into disco: music getting lighter in sync with the sky getting darker.