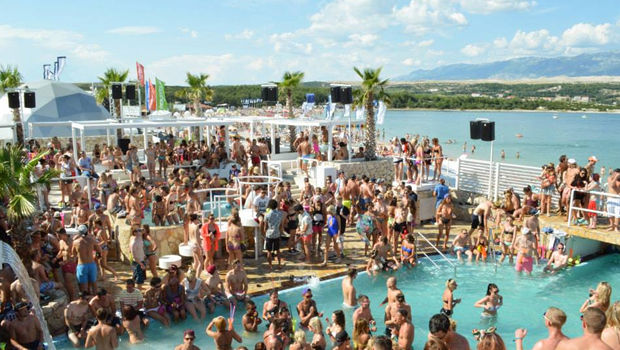 The Clubs & Line Up

When is a festival not a festival? Possibly Hideout’s biggest lead over rival Croatian events is its set up. The festival happens across four venues on the half-km stretch of Zrce beach: Kalypso, Aquarius I & II and event focus Papaya. Open air, swimming pools and onto-the-beach entrances keep the festival community together whilst the sound systems, bars and bar queues are as efficient as can be expected in this group of world class superclubs. Hideout added magic to the mix with it’s line-up. Amongst a slick injection of bass-heavy via Rudimental, Skream & Sgt Poke amongst others – the festival sailed deeper into house this year: with Papaya sweating heavily and packed to 7000ish capacity as Soul Clap, Julio Bashmore and Jamie Jones took the prize as biggest crowd pullers on the final night: with a special mention going to the light-bathed magic of SBTRKT followed by the dawn-seeking smooth roller of Marco Carola on night two.

Hideout set itself a task this year. All media eyes were on Croatia and Hideout’s ascension has been as dramatic as the country’s own. The event appeared to relish the heat. The organisers could not have done better: line-ups across venues were balanced, programming was seamless, and every boat party, pool party and after party was bigger, busier, brighter and more beautiful than ever before. Meanwhile the crowd this year had responded to the hype in kind: every single individual at Hideout was gymmed, was tanned, had more currency than they knew what to do with (they worked that one out pretty quick) and was there to unwind harder than they’d ever unwound before.

Croatia’s most anticipated pulled it off in style. We’ll be there next year. Will you?