Eric Volta: “We did feel like we were telling the government to f*ck off by raving”

If you’ve ever had the pleasure of checking out Eric Volta’s music, then you’ll know all well about the many unpredictable tendencies that tend to abound on his work. It’s a trait that’s as stark as ever on his latest release, a brilliant remix package of Tone of Arc’s Run Rabbit Run that only serves to enhance his rep as a producer of some repute. We gave him a shout recently – and here’s what he had to say for himself…

When did you first experience electronic music? What was it?

My earliest recalled exposure was through an uncle of mine when I was much younger. He was very into Jean Michel Jarre, but really it wasn’t until much later through industrial acts like Nine Inch Nails, Skinny Puppy, Leibach that I kinda crossed over. What was most appealing to me though were all the Warp artists, Aphex Twin, Squarepusher and Autechre especially. I then fell heavily into drum and bass and techno.

Do you remember the first rave experience you had? Did it have a very profound experience on you?

This is quite funny, but when I first started taking ecstasy I didn’t actually enjoy clubs or club music. Most of it was quite cheesy and finding quality was hard, and often led to very dodgy underground venues – bless them for even having this back in the day! Do understand, in some places where I grew up this sort of thing is heavily illegal. In fact it still is. I can’t count how many of my friends have been to prison for just having a good time. This is something I still find disgusting that government treat people who are harmless to others and good members of society like horrible criminals. In the 1950s The US started exporting its drug propaganda around the world and we haven’t recovered from it. It will be a long time and really needs to start!
I was asked recently about dance music’s political agenda. I sort of mocked the question. But thinking on it now, we did feel like we were telling the government to fuck off by raving. And it still does hold this of anarchic attitude. I just wish we had a little more organisation and education within us all. And that it wasn’t just some form of escapee or horrid validation that I sometimes recognise.

Viva la revolucion! So did you have a mentor of sorts with the music? Who was that?

I have had a few at different times in my life. I should say my Uncle Farid Ali, who recently passed away was a great musician. I used to watch him warm up on the guitar. You know how some guitarists warm up running scales, this guy did that with chords, it is mind blowing to watch. He was a Berkeley graduate, Herbie Hancock handed him his doctorate. I remember he snubbed me once – the way jazz guitarists do! When we spoke about playing , and how I expressed my interest in effects with guitars and manipulating the sound of the guitar. He told me – ‘well effects are just effects’. But that little moment really did make me realise that I was really more interested in sound more than playing.
My mum’s family is quite creative.

My mum paints and used to do pottery, she was a radio DJ in Oman in the 80s. Some of my aunts are really amazing Jazz singers and everyone in the family is a fantastic chef. So family did help. They didn’t really teach me my craft directly, I had to figure it out. We’re generations apart and our interests are very different. They are proud of what I have done with myself though.

I also should credit my secondary school teach Cikgu Aluyi. He walked into class one day and looked at me and said – ‘You look like you like music. I have something for you.’ The next day he brought me a bass guitar. And what do you know. He was so right.

Cool. At what stage did you realise you wanted to do music full-time? Was it a big leap of faith for you?

I knew from when I was 14. This is a funny story, but I was working as a ‘bouncer’ at a gig at an outdoor gallery in Singapore called ‘sub station’. Remember this is Singapore. I’m a pretty tall guy and out there that’s massive. But a free slot showed up so two buddies and me got asked if we wanted to fill the spot. I had never played in front of an audience before, but I had been practicing guitar an awful lot. So we went up on stage and just got into it. I cringingly wanna say the first song we played was Marilyn Manson’s ‘Sweet Dreams’. I was 14. But the rush of kicking on that distortion pedal and those drums behind me and us just coming together was the most memorable moment for me. And I knew music is what I wanted to do.

Do you have an opinion of the whole EDM thing? Do you agree with some DJs who say it’s a gateway for youngsters to more refined sounds?

I think marijuana and LSD are better gateways for youngsters to more refined sounds.

Aside from dance music, what do you listen to? And what else inspires you?

I love all good music. I always listen to classical music, scores, ambient, stuff with textures and soundscapes. I try not to be so absorbed with beats and bass lines all the time.

What’s Germany been like for you since you moved? How has it affected the music you make?

I suppose I have started to adopt a bit more techno into my sets. I’m not sure if this is because I am here though. I am pretty rebellious in nature. And if everyone around me is going to do techno, I’m looking the other way. And EVERYONE here is doing techno. It’s nice sometimes. And sometimes it’s just bloody annoying. You know when it’s good. It’s really good. Otherwise it’s so boring. Yawn.

Are there ever times were you struggle for inspiration then?

Well I have been working on creative methods for many years. If I can’t get through something I’ll start working on something else. And if that fails go get high and get laid. Women are such amazing sources of inspiration. Why is that?

I only wish I knew. Do you ever go out clubbing when you’re not playing these days? Or has it lost some of its novelty?

I still love it but I choose my battles. Most people are boring these days though to be honest. I feel that few are taking risks. Like everyone just wants to stay somewhere safe right now until someone breaks through with something new for everyone to jump on board with. No surprise though. It’s a pattern I keep noticing. But we have reached that point yet again.

I do prefer concerts and shows. I appreciate musicianship. Be it on the decks or with an instrument. But please blow me away. My last few favourite shows were Mulatu Astatke, Bobby McFerrin and Toto La Mompasina. I already can’t wait to see Bobby McFerrin again this year when he plays with Chic Corea in Berlin.

What constitutes success for you as a producer?

When I hit that barrier of tiredness or frustration and persevere. When I push through with someone I have had little conversation with yet we write to our hearts content together. When I walk out of that studio after a few days with a pocket full of gold.

So can you tell us a bit about your latest on Touch of Class. How did it end up there? And what’s your take on what the label have been up to recently?

Well credit where it’s due. The original is a masterpiece. It’s beautiful, poetic interesting in its arrangement and clever. I’ve been a fan of Tone of Arc’s music for a while. So one day whilst jamming with Mikey Tello in his studio in NYC, he plays me this track. And I’m just blown away. These are some of the most beautiful lyrics and vocal harmonies I have ever heard. I mean if I had to place this really it be on the sound track to some big African savannah type journey thing. It painted an epic picture in my head

Then there are the lyrics:

“Run rabbit run
Follow the sun
The rain comes after everyone”

It’s genius and poetic. The lyrics really struck a chord with me. So I asked to remix it. Tello told me it was already being released , but I offered to do them one just for fun anyway. Neither remix was what I expected to do. I did want a stripped back version of the original, drawn out. But the first one I did was at an airport in Mexico City. I had 4 hours to kill and did the follow the white rabbit mix in a couple of hours while chilling at a cafe. It was definitely more in line with the original and has very little of my own sounds involved. So when I went back into the studio I was determined to do a version which would act as a juxtaposition to the version I had just done. And I think I did. The really tricky part was the reharmonizing of the vocals to the more minor and moody tones I needed to bring out. I didn’t have separated vocal bounces. What I got was what I had. So it was a lot, a hello of a lot of tedious little edits and fades to shift the harmonies. This is one thing about me. I don’t mind it. I don’t mind hours of tedious work. The result is always worth the hard work. Always.

Did the single end up as you hoped it would? Or do you generally go off on tangents when you’re producing?

I’m Eric Volta, going of on tangents is what I live for.

Are you very picky about where your music gets signed to? Is it important that the label has a similar ethos to yourself?

Always. I find it hard to send my music to people. I am also super paranoid of my stuff getting leaked. I am sitting on years of music that most people and labels are never going to hear. It’s important to have personal relationships. And I like working with good nice people. That is most important to me. So word to anyone out there, make friends with everyone, get to know people. You never know.

What are your hopes for the year ahead?

Well I do really hope that Elon Musk’s test track for his hyper loop idea works! Something that would really change the world! I hope we see further disruptive technologies really change the way the world thinks about money & war, medicine and social togetherness. I watched a great documentary on big think about disruptive technologies and it really give you hope for the future.

Tone of Arc’s Run Rabbit Run (the Eric Volta remixes) is out now on Touch of Class. Check out his mix from Robot Heart below. 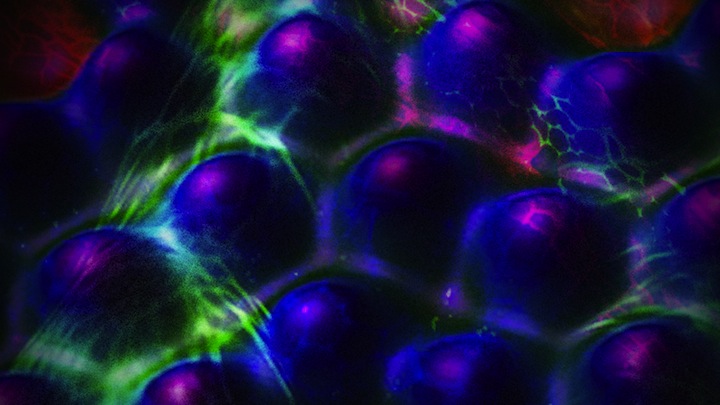