Derrick Thompson aka Drivetrain is the brains behind Soiree International, a Detroit label that consistently puts out solid house and techno grooves. From that perspective, their latest is a fine example of where they’re heads at right now. A stunning various artists compilation, it features originals from Thompson himself, as well as Rennie Foster, Santonio Echols and Hideyoshi. A true veteran of the scene whose love for the music still burns extremely bright, Thompson’s answers were every bit as interesting as the music he puts his mind to. Here, we caught up with him to find out about the man, the music and the label.

What’s the idea behind your name, Drivetrain? Seems like a bit of an unusual one?

The name came a long time ago. Being from the Motor City, the word drivetrain is spoken of often as it refers to the components in an automobile that generate power to the driving wheels. It’s mechanical, like a machine. I’ve been told that I work like a machine that never stops. Since I was a child, I’ve always kept very busy. Some people ask me, “do you ever sleep?” I deliver non-stop power to keep the wheels my music spinning.

So where did you grow up? How was it and what was your first introduction to techno music?

I grew up on the east side of Detroit, in a middle-class neighborhood. I had a great childhood filled with music and sports. My first introduction to techno music was Kraftwerk’s “Trans Europe Express.” That track was huge in Detroit. It really changed a lot of people’s perspective on music. The Electrifying Mojo, a local Detroit radio DJ, made the track a cult classic.

Who really inspired you back then? How have your tastes evolved since then?

I learned to play guitar, bass and drums at a young age. When I first started in music I was listening to artists whom I thought I could learn from. Playing guitar, I was really into the rock legends, like Jimi Hendrix, Jimmy Page, Eddie Van Halen, etc. I also learned from jazz guitarists like George Benson and Al Di Meola. I learned from bass legends like Stanley Clark and Jaco Pastorious. As I mastered these instruments, I took an interest in keyboards. I was particularly impressed with the technology that allowed one person to compose and record all of the parts of a song. This would free me of the disputes and musical differences of playing in a band situation. And it would give me access to record an unlimited amount of sounds and styles without any obstacles. As I begin to experiment with these concepts, my sound has touched many areas of the electronic music spectrum.

Do you feel it’s important for a DJ and producer to be eclectic? Do you let other sounds creep into your own music, for example?

I think that it is important for a DJ/producer to develop their own distinctive style…to be original. But in doing so, it is also essential to allow yourself to be inspired by other artists, but also your surroundings and life experiences. Channel this energy into creating something powerful and unique from within your soul.

The artwork on the new release seems to revolve around a sort of futuristic vibe. Can you elaborate on that one a bit?

The artwork reflects the theme of this release. It’s about the undefined direction of sound and what is to come. As the future is unknown the artwork echoes this idea of the evolution of creativity in music.

Is the artwork very important to the theme of the label? Do you think that’s something that’s been lost in the Internet age a bit?

Artwork can actually say a lot about the music that it represents. Sometimes when I’m crate digging, if I pick up a record with questionable artwork, I may not bother listening to what’s inside. Unfortunately, I could be missing out on some real gems, but that’s the way it goes. Shop owners have also told me that label art helps to sell a record. So yes, it is important. I wouldn’t say that it’s been lost in the Internet age. Label art is still very visible when you download music. But it may not play as big a factor as it is with vinyl.

So talk us through the label if you can. What made you want to set it up in the first place?

I wanted to have my music on a global platform. Prior to starting the label, I had been writing songs with bands. I’ve even had a showcase or two with big labels. But nothing ever panned out. I was writing house and techno tracks at the same time. I wanted to take my musical destiny into my own hands. So I launched Soiree Records International and I’ve never looked back.

Was there one person or moment that really inspired you to do so?

I can’t really say there was one person or moment that pushed me over the edge. It was more of a combination of things. The frustration of not being signed by the big boys. Also noticing how successful producers seemed to be when running their musical endeavors independently.

What are the biggest challenges facing label owners these days do you think?

The market is saturated today. Anyone can start a “record label” relatively easily and put music into the atmosphere. That being the case, there is a deep sea of music. To be successful, you not only need to have outstanding tunes, but an amazing promotional machine, perseverance and dedication. And still, your music may be swallowed up into the bottomless ocean of tracks.

Did you have a mentor of sorts when you decided to set it up? What’s the most invaluable piece of advice you’ve been given?

My inspiration was those who didn’t believe in me. In the beginning, no one really had my back or pushed me to move forward. This made me want to work harder to prove the “haters” wrong.

Do you still press on vinyl? How have you found the process of late?

All releases on Soiree Records are available on vinyl format. I think we will always press vinyl. For me, it’s the prize of the effort. It’s tangible. It’s valuable. And it legitimizes the music. Unfortunately, vinyl doesn’t sell nearly as many units as it did at one time. And the price to manufacture it has not gone down. This makes it a real challenge to justify the costs of pressing unless you can sell lots of copies.

You guys seem to release both techno and house releases. Is that fair to say?

I suppose you could say that. Some of the tracks are clearly house tracks. The “techno” tracks, you could label them as you like. Today’s techno is much slower and groovier than it was in the past, like back in the 1990’s. (At least the techno that I prefer.) Much of it can easily be mixed in a house set. And many of our “house” tracks work very well on the techno floor.

Can you tell us about the latest release on the label? How did it come about?

Future Ambience will be released on February 23rd worldwide on vinyl and digital formats. The featured artists all brought tracks to me over time. Rennie Foster is a veteran to the label, so we always seen to have some of his tracks in our arsenal waiting to be released. We were very honored when Santonio Echols came with some of his fire. Magicgrooves was the perfect fit for this release. And Hideyoshi has many tracks that we’ve been listening to. Alpha Decay was right for the Future Ambience theme.

How’s your DJing going at the moment? Do you devote as much time to DJing as producing?

DJing is going great. I’ve been doing it for such a long time now, I often find myself reinventing my style. In recent months I’m using 4 channels. This performing DJ style allows me to not only play vinyl, but I’m also working with samples, loops and effects to build tracks and do tricks on the fly. This has kept the DJ experience fresh and adventurous for me. However, I do not spend as much time DJing as I do producing. Obligations do not allow me to travel as much as I once did as a DJ. But I am very passionate about both. Whatever I’m doing I give it 100% of my focus and attention.

What constitutes a success for you release wise? Charts? Sales? Recognition?

All of those things are important and each has its place in grading success. At the end of the day, I feel good when I know the material we release is quality, the artists are happy and I’ve done all I could to push it.

What are your long-term goals?

My goal has never changed. Musically I need to keep pushing the boundaries. I must continue to challenge myself, keeping all things fresh. I would like to continue working with great artists. And last, I have to keep proving the haters wrong.

What else should we be looking out for from you in 2015?

I will be releasing a 14 track CD early this year. I’m working on an album which will be released late in the year. I’ll be releasing tracks on several labels throughout the year. Of course, Soiree Records will continue to do what we do, but we’ll do it even better in 2015. I’m also planning on DJng a bit more this year.

Future Ambience is out Feb 23rd on Soiree International. Check out Drivetrain album cut ‘This Love’ below. 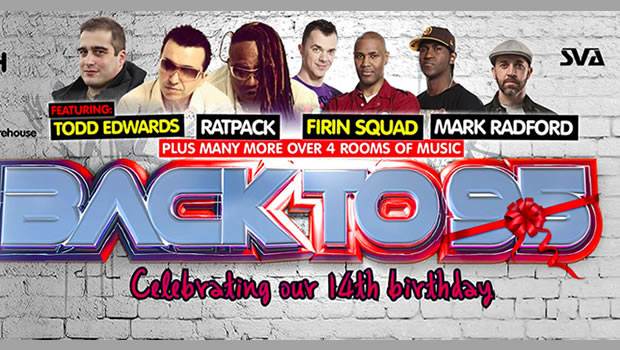