The Crucifixion Of Deep House 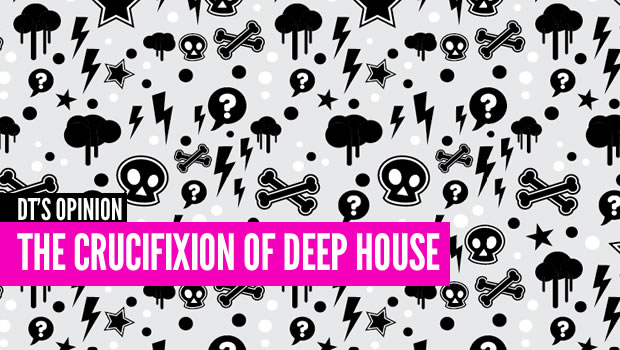 These were different times, where one angry man and 90,000 followers decided to voice their opinion. Move forward to current day and social networks have given everyone a platform with which to become a campaigner, with spiralling circles of connections spreading the word via hashtagging and retweeting. Public opinion is much more keenly felt, and trends more accessible than ever. Social media has been proven to be a powerful force, uniting individuals (such as those in the Arab uprisings) together into a single focused mass in a spectacle of passion and will. But human nature shows that our intentions can often be misguided, and the collective finger can often be pointed in the wrong direction.

For instance, take Microsoft’s backtracking reintroduction of the Start Button to Windows; dip your head into any part of the internet when Windows 8 was introduced and you would have seen mass derision at the removal of this one tiny part of the desktop. Windows 8.1 plans to reintroduce the Start Button, its function to take you to the much maligned Start Menu replacement Metro interface. Surely everybody is happy now? Not so, the enraged public have realised that it was not the Start Button they wanted back, it was the removal of the Metro interface entirely.

This pitchfork mob mentality has been reflected in the dance music scene; one promoter reportedly took the reactionary step of adding a “No Crosstown Rebels/Visionquest tracks” disclaimer to their nights. Considering Crosstown Rebels and Visionquest see artists as diverse as dBridge, Mathew Jonson, and Audion gracing their catalogues, such actions are utterly thoughtless, as if some sort of tangible sacrifice is needed to stuff into a burning wicker man to placate the baying mobs.

In essence, the problem here isn’t a dislike of deep house, or the “wrong” DJ’s playing deep house, it is a problem with the creation of lazy derivative music and the adoption of zeitgeist by a populist movement. Look at any long standing DJ worth their salt, and you’ll see that they understand that good music will always remain good music. Figures like Francois Kevorkian, DJ Harvey, Laurent Garnier and Andrew Weatherall straddle genres and decades with ease, unfazed by fashion or public opinion. Producers, DJ’s, and even consumers, who live music through and through will always believe in what is true to themselves, watching as the seasons shift and as the hangers on swing to the next hotbed of aural activity.

Anyone with a modicum of foresight can see that too many pitched down 90’s vocals could stifle the bass movement, the upcoming rave revival could be swiftly murdered if one misguided youthful producer decides that the Toytown Techno sub-genre would be a rich vein of inspiration to mine, and even techno, which is currently enjoying one of its most vividly purple patches to date, can often suffer from release after release of emotionless kick drums. This is the price of popularity and the readily accessible nature of electronic music production. But this is also where publications, such as this one, can play a vital role, with dedicated contributors spending thankless hours sifting through the derivative, with the aim of showcasing the worthy and overlooked.

Deep house will implode, there is no escaping it, but this isn’t a crisis as genres naturally shift in cycles. This won’t be the first time deep house has suffered a backlash and apparent death, with the late nineties seeing a rebellion against the overly muso-serious and organic movements spearheaded by Nuphonic and Ibadan. After the collapse deep house will simply carry on, much as disco did. A phoenix born from the ashes, if you wish to tread the path of well worn tropes. As it evolves, those in the media and eternally hip circles may try and tag it as a new genre, with Outsider House becoming a term for those trying to distance themselves from the increasingly unfashionable crowd. It’ll still be what it is, proving is that deep house is more of a mentality rather than a genre, a step away from the confines and boundaries of straight up house. The popularity over the last few years have seen it wear an identity like an ill fitting jacket, and one that is rapidly going out of fashion. Now is the time to cast it off, mix it up and embrace a future free from the restraints of boundaries.