Crookers: “I’ve got more than 1000 loops on my computer that are waiting to be songs”

Electronic grand wizard, Francesco ‘Phra’ Barbaglia, AKA Crookers released his last single, ‘Ghetto Guetta’ via his own imprint Ciao Records last October and quickly established that the Crookers sound would under his lone stewardship be reverting to the old school formula that gave Crookers its imitable sound. ‘Ghetto Guetta’ with its tongue in cheek title perfectly encapsulated  the his octane, no holds barred live shows and productions for which ‘Phra’ has become renown and now with another incendiary in the pipeline looks certain to set the summer season ablaze.

With big plans for the summer and new low end  frequency banger ‘Heavy’ about to drop on Ciao this month we sat down with Francesco for a quick chat to see what makes him tick.

If I could take you back to the beginning and ask you what first drew you to electronic music? Where was your first gig? How did it go?

When I was 11 years old I saw my first ever DJ and after 4 days of annoying him he finally showed me how it all worked and how to become one of them. I was in love. I spent that entire summer cutting my neighbours grass to save enough money to afford technics and a shit mixer. After I bought my technic, yes I know its unusual to have only one! I started practicing how to scratch in my tiny little basement using the radio to play some music so that I had a rhythm to follow. I finally met this hip-hop producer, who is still my best friend now  who introduced me to ‘production’. Thanks to him I learnt how to use a sampler, mixer, cassette recorder and the basics of recording. My first ever gig was at the ripe old age of 13 where I was asked to playing in a club right near my house. Unfortunately it wasn’t paid, but they used to give me 1 piadina and a couple of soft drinks to keep me happy. I was also in love with a girl who worked there too!

In regards to the development  of electronic music we’ve seen a lot of changes from Vinyl to CDs and then from CDs to files and the introduction of  software like Traktor . What changes do you think have been for the better and is there anything you’d like to change back?

When I first started DJing and had house parties I was playing cassettes on 2 decks, I then moved onto vinyl and used that for years until I changed to CD’s and now I just use an SD card. This is so much easier; I can’t really see myself travelling with 3 cases full of vinyl! I don’t think the change in technology has affected my musical style; it’s not a matter of how you play your music anymore. Playing vinyl doesn’t make you play cooler music than when you play the same track from and SD card.

Cool. Tell us what are your favorite bits of kit both to play live and produce with in the studio?  Do run analogue, digital or a mixture of the both?

To play I need 3 pioneer CDJ’s and a mixer… Simple and easy.

I’ve been a ‘ghetto’ producer for forever; I started with an Akai sampler, a little mixing board and a couple of really shitty processors. I also used to practice on a laptop with super crap speakers trying to make my sound better, which was almost impossible!

Now I have a pretty confortable studio that I’m happy to work in. I feel good when I sit there with some good monitors, a couple of hardware compressors and a tape machine to get that “warm” sound I love. I do still produce with my laptop though when I’m travelling and try to find time when I’m home to my projects properly.

How do you feel the rise of digital software which has help breed a new generation has affected electronic music?

It’s easier for everyone to produce a track, but it doesn’t mean it’s going to be great quality. Now everyone can produce a “bad” or “good” track with their laptop but it just takes more time and research to find what you really like.

What would your advice be to the new generation of DJ’s and producers?

Make you own sound and be patient.

How do you go about set building? Off the cuff organic mixes or do you have a rough plan for whereyour playing? Where are your favorite places to play?

I’m the kind of DJ that after years I still want to play a track that makes people ask me “tttthhha fuck is this!” It’s just how I work. I don’t have a rule on my set… I play what I want to play and what I feel the people want to hear to enjoy themselves. I don’t have a favourite place to play in general… everyplace is special in itself.

Crookers originally started off as a duo. Are there any collaborations we’ll be seeing you engaging in the near future?

I’m finishing my new album which is gonna have some collaborations in it. Friends, producers and sexy vocal features. But I don’t want to say too much about it yet!

With electronic music cracking the charts at the moment and the explosion of commercial dance music blowing up in the US can you give us your opinions on the current electronic landscape?

I don’t know a lot about it. I follow what I think is really good and what I like. But I’m not the type of guy that sits on his computer everyday checking charts. I’m sitting on my computer to make music I like.

Could you tell us about the processes that you go through when creating new music?

I don’t have a real method to produce music. The most important thing for me is to sit in the studio when I can and play with as many sample, synths  and compressors as I can and try new stuff and have fun. When a loop stands out I’ll transform it into a song.

I think I’ve got more than 1000 loops of 25/40 seconds stored on my computer that are waiting to be songs!

So you’ve got plenty of material for the future then! When you are not in the studio what do you do to relax?

I go to the gym, sit in my garden and enjoy the panoramic view and check out expensive stuff on the internet such as houses, cars and shoes which are so expensive I catch myself shouting “It’s craaaaaazy!” When home, which isn’t a lot I normally organize a huge dinner with friends and family. Really normal family time. 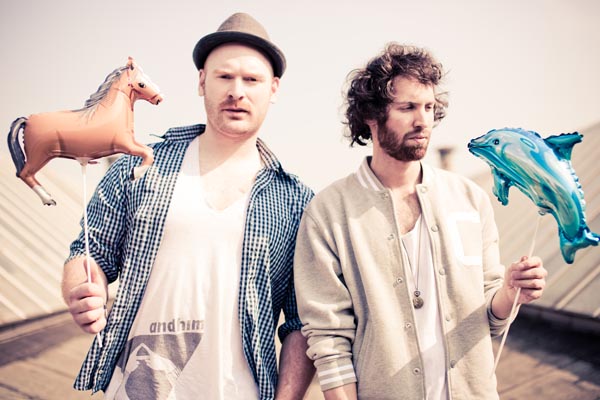